Tweet
UPDATE 18 Sept 2013: Russian Foreign Minister Sergey Lavrov is now citing the VIPS letter as part of its proof that the Assad regime didn't do it. According to RT he said in an interview:


"Besides, experts in Europe and the US, including twelve retired employees of the Pentagon and the CIA, as you know sent, an open letter to President Obama, explaining how it was all fabricated,”

On 6 September 2013 former CIA agent turned activist, Ray McGovern, speaking for Veteran Intelligence Professionals for Sanity (VIPS), posted a memo to his blog that absolved the Assad Regime of responsibility for the chemical weapons attack that took place in the Damascus area on 21 August 2013.

Not only does this group claim that the Syrian government did not carry out the attack, they claim it was done by the opposition with the support of agents from Qatar, Turkey and the US. I addressed their theory and challenged them to name names in My dare to Ray McGovern & VIPS on Syria CW attack, now I want to look at the source of their information.

In the memo, VIPS says "that some of our former co-workers are telling us" what is really happening and then they go on to say:


Our sources confirm that a chemical incident of some sort did cause fatalities and injuries on August 21 in a suburb of Damascus. They insist, however, that the incident was not the result of an attack by the Syrian Army using military-grade chemical weapons from its arsenal. That is the most salient fact, according to CIA officers working on the Syria issue. They tell us...

Clearly, they are implying that their sources are CIA officers currently working the Syria desk.

Now, jumping ahead to the meat of their intelligence on what they say was a false-flag operation designed to precipitate military intervention in Syria, they tell us:


we have learned that on August 13-14, 2013, Western-sponsored opposition forces in Turkey started advance preparations for a major, irregular military surge. Initial meetings between senior opposition military commanders and Qatari, Turkish and U.S. intelligence officials took place at the converted Turkish military garrison in Antakya, Hatay Province, now used as the command center and headquarters of the Free Syrian Army (FSA) and their foreign sponsors.

Senior opposition commanders who came from Istanbul pre-briefed the regional commanders on an imminent escalation in the fighting due to “a war-changing development,” which, in turn, would lead to a U.S.-led bombing of Syria.

Now, here's where it gets weird. This same thesis and intelligence, in fact, almost the exact same words were published 5 days earlier in an article on Global Research by Yossef Bodansky, titled "Did the White House Help Plan the Syrian Chemical Attack?":


On August 13-14, 2013, Western-sponsored opposition forces in Turkey started advance preparations for a major and irregular military surge. Initial meetings between senior opposition military commanders and representatives of Qatari, Turkish, and US Intelligence [“Mukhabarat Amriki”] took place at the converted Turkish military garrison in Antakya, Hatay Province, used as the command center and headquarters of the Free Syrian Army (FSA) and their foreign sponsors.

Very senior opposition commanders who had arrived from Istanbul briefed the regional commanders of an imminent escalation in the fighting due to “a war-changing development” which would, in turn, lead to a US-led bombing of Syria.

The opposition forces had to quickly prepare their forces for exploiting the US-led bombing in order to march on Damascus and topple the Bashar al-Assad Government, the senior commanders explained. The Qatari and Turkish intelligence officials assured the Syrian regional commanders that they would be provided with plenty of weapons for the coming offensive.

Indeed, unprecedented weapons distribution started in all opposition camps in Hatay Province on August 21-23, 2013. In the Reyhanli area alone, opposition forces received well in excess of 400 tons of weapons, mainly anti-aircraft weaponry from shoulder-fired missiles to ammunition for light-guns and machine guns. The weapons were distributed from store-houses controlled by Qatari and Turkish Intelligence under the tight supervision of US Intelligence.

As anyone can easily see, this isn't just the same story told from different intelligence sources. This is the same story slightly rewritten five days later. Rewritten in part, to remove obvious source give-aways, like “Mukhabarat Amriki,” the Syrian term for US intelligence.

So it would appear that the source of VIPS intelligence is not active CIA case officers speaking to old colleges like Ray McGovern, Philip Giraldi, Larry Johnson and Ann Wright on the q-t, it is Yossef Bodansky writing for the pro-Assad, pro-Qaddafi, pro-Russian website Global Research.

So who is Yossef Bodansky? David Kenner has done some interesting research there. What he's come up with was published this week on Foreign Policy:


Bodansky is an ally of Bashar's uncle, Rifaat al-Assad -- he pushed him as a potential leader of Syria in 2005. Rifaat is the black sheep of the Assad family: He spearheaded the Syrian regime's brutal crackdown on the Muslim Brotherhood in the early 1980s, but then was forced into exile after he tried to seize power from his brother, President Hafez al-Assad, in 1983. Despite his ouster, however, Rifaat is just as hostile to a Sunni Islamist takeover as other members of the Assad family -- a position Bodansky appears to share. Ending Alawite rule in Syria, Bodansky wrote on another pro-Assad website, "will cause cataclysmic upheaval throughout the greater Middle East."

The implication is that the real source of VIPS's intelligence is not CIA operatives chatting it up with old pals. That is just their cover story. The real source of their information on how the opposition gassed over a thousand of its own people with Obama's help is the Assad Mukhabarat, the Syrian Security Services.

Guess who else likes this Bodansky/VIPS conspiracy theory that blames the rebels and lets the Assad dictatorship off the hook? Conservative talk show host Rush Limbaugh! On 3 September 2013, Limbaugh told his audience:


"There is evidence -- mounting evidence -- that the rebels in Syria did indeed frame Assad for the chemical attack, but not only that, but Obama, the regime, may have been complicit in it. Mounting evidence that the White House knew and possibly helped plan the Syrian chemical weapon attack by the opposition!"

He then goes on to cite Global Research and Bodansky as his source, which actually shows more integrity than Ray McGovern & VIPS!

It is a very sad day for the Left when we see Ann Wright and Rush Limbaugh united in supporting a fascist dictatorship against a popular revolution, and promoting the same lying Assad Regime propaganda to do it.

The Assad Regime did kill over a thousand Syrian civilians, a third of them children, in the Damascus area on the morning of 21 August 2013. The Free Syrian Army, the Syrian National Coalition, the Arab League, the governments of Turkey, US, France, UK and many other countries have found the Assad Regime responsible, as now has Human Rights Watch. The evidence is incontrovertible and overwhelming.

I will show in another post, in case its not already clear, that even if Assad were somehow not responsible for the chemical deaths, he is still a brutal mass murderer that has killed thousands of civilians with his air force, artillery and ballistic missiles. He bombed hospitals with his jet planes and since the chemical attacks, he has killed hundreds in the very same areas that VIPS says he didn't use the chemicals to kill in. This is the type of mass murderer, torturer and rapist these people are trying to defend on the chemical weapons charge.

In my earlier post, challenging Ray McGovern et al, I showed how they were wrong, now I think we can see that they aren't even honest. They are attempting to promote the Assad Regime with false intelligence coming from that regime and they are attempting to trade on their history as activists and their break with US intelligence to give the story more creditability than Yossef Bodansky and Global Research ever could.

These people, and here I will name them, because I believe it now constitutes a roll call of shame. Below that is a reminder of what they are trying to cover up. From Consortium News, which first published the memo on 6 September 2013: 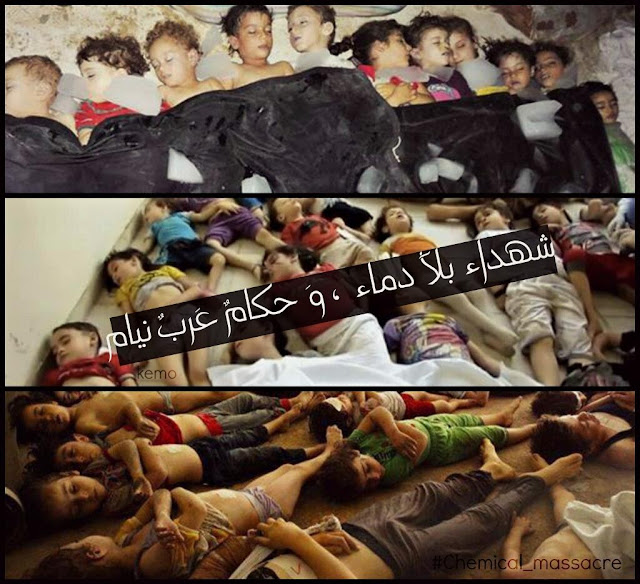