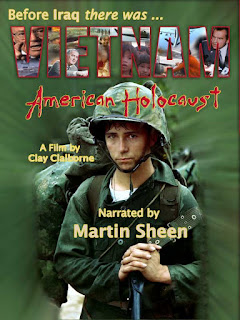 In the 20th Century the Vietnamese people fought a 30 year revolutionary war of liberation from imperialism. Starting with the Declaration of Independence read by Ho Chi Ming in Hanoi on 2 September 1945 and ending with the fall of Saigon on 30 April 1975, they first defeated the French imperialists, and then took on, and defeated, US imperialism, while it was still ascendant.

The United States had never lost a war before it tried to rule Vietnam. Many say it marked the beginning of the decline in US power and only the folding of the Soviet Union has allowed it to hang on to the "top gun" position since.

For the oppressed people of the world, what Americans refer to as "the Vietnam War," became a shining light. The Vietnamese showed that though the war of liberation last for decades and the enemy be the most powerful on Earth, a people united cannot be defeated. They also showed that through the war be brutal, the Vietnamese lost over 3 million lives in the American War, and barbaric, Americans collect ears of murdered Vietnamese, a peaceful, prosperous and independent nation could be built after victory.

Given the challenges now being faced by people all over the globe, from Syria to Manhattan, in the 21st century, the lessons of the Vietnam War have never been more relevant. Therefore I am proud to introduce you to my most important work in film, a study of the Vietnam war from an anti-imperialist perspective after the Iraq War and narrated by the great actor Martin Sheen.


You may also be interested in these other DVD's from Linux Beach Productions: