Director of National Intelligence Joseph Maguire claimed that he didn't have to deliver the whistleblower's complaint to congress in seven days because it was about Trump and he isn't under the supervision of the DNI. While the focus of the whistleblower's complaint most certainly is the extortion of Ukraine by Trump in demanding dirt on Biden while withholding congressionally mandated arms from a country fighting a Russian invasion, the DNI still should have forwarded the complaint to congress within the statutory limit because it also contained a small complaint about the abuse of an NSC code-word server that almost certainly would have fallen under the purview of the DNI.

In his opening statement to congress, DNI Maguire made this excuse for his failure to deliver the whistleblower's complaint to it in a timely manner:


Joseph Maguire: 00:45:22 Let me also discuss the issue of urgent concern. When transmitting a complaint to me, the Inspector General took the legal position that because the complaint alleges matters of urgent concern and because he found the allegations to be credible, I was required onto the Intelligence Community Whistleblower Protection Act to forward the complaint to our oversight committees within seven days of receiving it. As we have previously explained in our letters, urgent concern is a statutorily defined term. To be an urgent concern, the allegations must in addition to being classified, assert a flagrant, serious problem, abuse or violation of law and relate to the funding, administration or operation of an intelligent activity within the responsibility of the Director of National Intelligence. However, this complaint concerns conduct by someone outside the Intelligence Community unrelated to funding, administration or operation of an intelligence activity under my supervision. Because the allegation on the face did not appear to fall in the statutory framework my office consulted with the United States Department of Justice, Office of Legal Counsel and we included the Inspector General in those consultations.


The issue is—the whistleblower is suppose to be about intelligence abuses, the president is not formally a part of the intelligence community.

Ever since Maguire made this lame excuse for running straight to the White House with a whistleblower's complaint about the White House, this has been a frontline argument of the pro-Trump crowd. It is also the basis of their claim that this informat isn't entitled to the protections given to the whistleblower by the Act—the one thing that could give the president's death threats legal teeth.

This might well have been the case except for the fact that the whistleblower also complained about the misuse of IC assets. From the Whistleblower's Complaint:


White House officials told me that they were “directed” by WhiteHouse lawyers to remove the electronic transcript from the computer system in which such transcripts are
typically stored for coordination, finalization, and distribution to Cabinet level officials.

Instead, the transcript was loaded into a separate electronic system that is otherwise used to store and handle classified information of an especially sensitive nature. One White
House official described this act as an abuse of this electronic system because the call did not contain anything remotely sensitive from a national security perspective.

We now know that phone memo wasn't the only “politically sensitive” document being improperly stored by lawyers on a NSC code-word security system. The DNI is on the NSC, so those “intelligence abuses” almost certainly should be covered by the Intelligence Community Whistleblower Protection Act, even if the POTUS isn't. That alone is enough to give the Whistleblower's complaint standing. That alone was reason enough to transmit the complaint to congress within the statutory seven days. Maguire got it wrong.

Many a criminal thought he has committed the perfect crime, and the FBI wouldn't be involved because he was careful not to commit any federal offenses, but he slipped up when he used the US mail in his scheme. Trump may think he had a “perfect”  conversation with Zelenskyy because he choice his words carefully and because the president isn't covered by the Intelligence Community Whistleblower Protection Act but he may have slipped up when he hid the evidence on an NSC code-word security system.

Still, I fear for this whistleblower. Unlike your usual wiseguy informant, our hero can't hide from enemies behind the anonymity of the Federal Witness Protection Program. Not with Bill Barr at Main Justice. 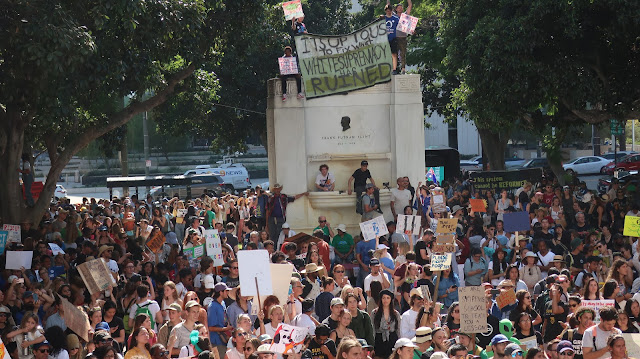 They raised their important banner high in the center of the park.
Global Climate Protest in LA on Friday 9/20/2019 - "The wrong ICE is melting"


This was my favorite chant! 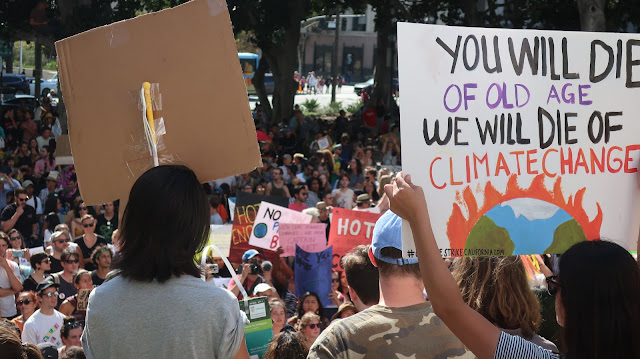 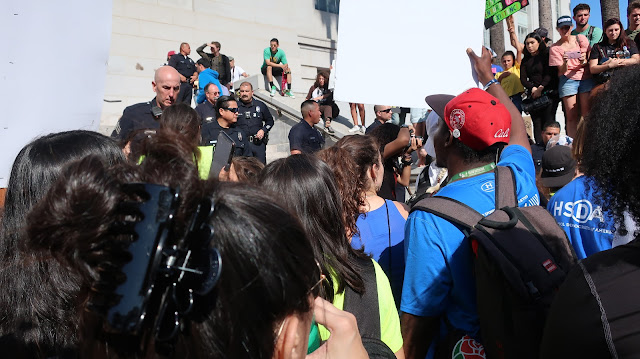 I’m struggling here. How can actual adults - thousands apparently- believe it’s the child has created this stir and not the massive media mobilisation engaged by the corporate greenwashing industry? Have they even checked the specific demands being promoted? https://t.co/Z1LzTQY5Cw
— Tim Hayward (@Tim_Hayward_) September 21, 2019

These "anti-imperialists" just don't get it. They have no belief in people power and think everyone is a puppet of some western imperialist.

Why didn't state & federal officials release the name of the Odessa shooter?

Did they withhold his name so they could scrub is social media profile first?

After Texas authorities released the name of the El Paso shooter - Patrick Crusius, we quickly learned that he was a white supremacist Trump supporter, and that he left a racist manifesto that showed that he was strongly motivated by Trump's genocidal rants about immigrates of color "invading" the United States via the southern border. From their decision today, it's clear they wish they hadn't done that.

Santino William Legan,the 19-year old white man who murdered three people of color, and injured a dozen more, in a shooting spree at the Garlic Festival in Gilroy, California, on July 28, 2019, also seemed to be motivated by white supremacy. In an Instagram post before the shooting, he advised people to read Might is Right, a 1890's pamphlet very popular with white supremacists and neo-Nazis.

With Saturday's Odessa/Midland shooter, they didn't repeat that "mistake." They have unveiled a new policy. They are keeping the shooters name a secret, because they “Don’t want to give him the notoriety.” They have only said that he is a white male about 30 years old. They know his exact age, of course.

They want us instead, to focus on the victims, as though that might help us understand why they were shot, and help us prevent such tragedies in the future. That is nonsense.

Never mind that to stop these mass murders we need to understand the motivations of the shooter. Never mind, the shooter may have associates capable of similar actions, and there are undoubtedly people in the shooter's circle that could shed light on that crucial fact - provided they know who the shooter is. Making his name public is not a question of giving notoriety to the dead shooter. It's a question of public safety.

In The making of Trump's American Holocaust, I wrote


US President Donald Trump speaks the language of mass extermination while his administration prepares the infrastructure for it. He calls refugees “invaders." He says the inner-cities are “infested.” By speaking of people of color as an “infestation,” Trump has called forth the “exterminators.” In recent attacks in Gilroy, El Paso, and beyond, we are seeing the frightful results.
...
While Trump talks the language of genocide, his administration is using an immigration crisis it largely created, to justify the building of concentration camps. It tries keep any public knowledge of what it is doing to a minimum, while using the occasional “reveals” to acclimate that public to the inhumane treatment of people of color by its government. And now he has brought back the federal death penalty. That some of his unhinged supporters should “get ahead of the program,” as we have seen recently in Gilroy and El Paso, may be unintended, but it certainly is a predictable consequence of the overall direction he is pointing.

So now it looks like they are engaged in a cover-up. Is it because they don't want us to know if this mass shooter is a continuation of that pattern, and another tragic result of Trump's fear-mongering?

UPDATE: Odessa city officials, not state or federal officials, have revealed that the name of the shooter is Seth Aaron Ator, 36, of Odessa, Texas. Now we can begin to unravel this mystery. Check back for future updates.


US Daily Report is saying:


Not much is known about the mass murderer because most of his social media pages seem to have vanished.

And some people have taken to social media to ask why do authorities reveal the identities of killing suspects rapidly when they are black or Muslim, and delay the process when the mass murderer is white.

One person asked: “The black kid’s name was made pubic very fast, but now we have the name of the Texas shooter finally. Seth Aaron Ator. Look I would rather they never shared any of these peoples names, but they can’t have this double standard.”

Another commenter had this to say: “Everything about #SethAtor has been scrubbed off social media why? What are the authorities hiding about this Killer? My Life has been edited about him. What in the hell is going on with this Midland Odessa Shooting Terrorist.”

In my own search, I went straight to the Internet Archive Wayback Machine hoping I would find something there, and while I got four hits on "Seth Aaron Ator," it would appear I got there too late. I got a couple of 404 Not Found errors, one said "Hrm. The Wayback Machine has not archived that URL." Then why store a link to it? One said simply "Purged Account."

And now his Linkedin Profile, which was there only minutes ago (I found it from this Heavy.com piece. "There is one LinkedIn page with Ator’s name attached to it." Why didn't I make a screen shot.) has been replaced with "This profile is not available." This leaves little doubt the his social media profile was being scrubbed even as I was writing this.

For a history of how the second amendment was originally designed as a measure to support slavery, and its application to people of color, see my Murders of Alton Sterling & Philando Castile: No 2nd Amendment rights for blacks.

There is also this, indicating he was a Republican:

Posted from long before the shooting. You can search with a date filter. pic.twitter.com/OE3MgcPrgH
— Todd Melcher (@Immersionpv) September 1, 2019

I did find his MyLife profile in Google's webcache. This time I took screenshots: 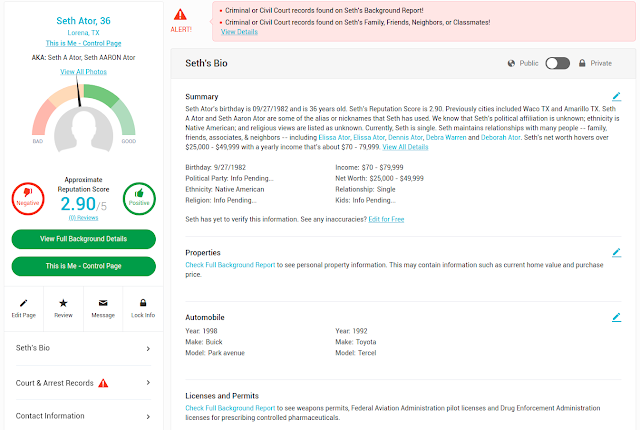 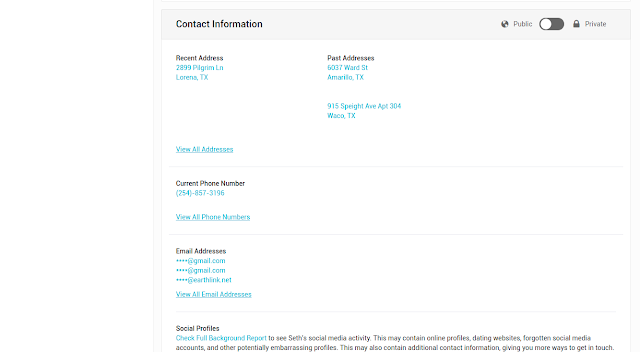