Ralph Nader on Democracy Now: Unsafe at any age

By now it should be clear to all that when Donald Trump talks about when America was "great" before, he is talking about a time when white men of wealth could rule without the challenges they face today, i. e. the good ole days of the 1950's or maybe even the 1850's. Ever since he came down a Trump Tower escalator to complain about so-called Mexican rapists and announce his candidacy, he has stood at the center of a last-ditch attempt by a segment of the US capitalist class to re-establish white supremacist rule in a radical new way that is likely to lead to fascist government in a few years if not stopped.

This successful attempt by a white supremacist cabal to seize executive power in the US government was aided in no small part by a white Left that rallied around the Green Party candidacy of Jill Stein. This group refused to acknowledge the extreme white nationalism and racism that distinguished the Trump candidacy. They declared that there were no significant differences between the two contenders, or even claimed that Donald Trump was the lesser of two evils. They campaigned for progressives to either cast a symbolic vote for Jill Stein, or just stay home. They never seriously tried to win over Trump voters. Their focus was on diverting Clinton voters to the Jill St. off-ramp This was, in effect, a voter suppression campaign every bit as effective as any run by the Russians or the Republicans, and without it Trump would have lost. Had the Jill Stein voters in just three states voted for Hillary Clinton instead, she would be president now.

In 2000 the stakes weren't as high, still Green Party presidential candidate Ralph Nader played a similar role in helping George Bush win the White House and start a war in Iraq that continues to this day. That is why after all the votes were tallied in November 2016, we published Dr. Jill Stein now officially 'the Ralph Nader of 2016.'

Last Monday, Amy Goodman had Ralph Nader on Democracy Now to get his appraisal of the current situation. In spite of the Trump cabal's continuing fear-mongering about immigrants from the South, and the cruelty they are training Americans to accept in the government's treatment of people of color. In spite of the fact that the architects of this immigration madness see it as but a stepping stone to racist policies they hope to implement against all people of color, regardless of citizenship, Amy and her guest continue to remain mute on the racism driving Trump's policies and programs.

What makes this particularly tragic is that during the 2016 presidential campaign, the line from Greens was even if they had no chance of winning, and might even throw the election to Trump, they were doing the really important work of building the political party that could lead the mass struggle in the future. Now the future has come, and not only is the Green Party no more effective than it ever was, many activists formerly known as Greens are striving to distance themselves from that history.


This is how Amy Goodman introduced him:


To talk about all of this and much more, we’re joined by longtime consumer advocate and former presidential candidate [ of what party, Amy? ] Ralph Nader. He is author of the new book To the Ramparts: How Bush and Obama Paved the Way for the Trump Presidency, and Why It Isn’t Too Late to Reverse Course.

Ralph Nader, welcome back to Democracy Now! Let’s start where we ended, with that long list of just what’s happened this week,

We'll get to Nader's list in a moment. First, let's start with when he was on DN just before the election, because I think it can be fairly argued that Ralph Nader also paved the way for the Trump presidency, and I suspect that isn't covered in his new book.

Ralph Nader didn't notice the racism of the Trump campaign when he was on DN before the election, 19 September 2016, but he did rage against what he called "bigotry" in the 2016 presidential campaign:

Anyway, back to the present. Ralph Nader gives Amy Goodman a list of current political priorities as he sees them:


RALPH NADER: And we’re going to present to the progressive chairs of the House of Representatives a whole list of hearings that have to be held in order to put these in play, electorally, in terms of public opinion and in terms of civic action. I can give you a quick list if you’d like.

RALPH NADER: OK. First, obviously, is one on single payer. Full Medicare for all...

There needs to be hearings on corporate crime by the Judiciary Committee...

5,000 people die every week in this country in hospitals due to preventable problems. We know what they are. There are no congressional hearings here.

There’s got to be congressional hearings on foreign policy...

Criminal justice reform, that one is long overdue...

How about climate devastation? I think we shouldn’t use the words “climate change.” It’s too benign...

Good list. Except it fails to fight or even address the extreme white nationalism, both in rhetoric and program, that the Trump cabal uses to "rally its base." This is the terrain of the most important political struggle facing the country. This obviously includes all the fear mongering against brown immigrants that has been skillfully used to normalize a level of official cruelty to people of color that would have been intolerable only a few years ago. Shouldn't a progressive congress also challenge Trump on his border wall and Muslim ban, Nader?

Trump has also lead a very vocal attack against African American football players for protesting the racist killings of people of color at a time when those killing go unabated, and hate crimes by white supremacists, including racist murders, are on the rise. Where are these questions on Nader's list?

Maybe the new congress should exercise some oversight into the FBI's responds to the rising tide of white nationalist violence, and question why the new category of "Black Identity Extremist" was created by the Trump administration.

Much of Trump's support for white nationalists international, whether in Britain, Europe or South African has been done in concert with Vladimir Putin, and Russian ultra nationalists. Shouldn't the new congress also look into this?

Ralph Nader didn't exactly lead the fight against Trump before the election. Now he tries to see a silver lining where he can. For example, he thinks that "if they overturn judicially" ObamaCare "that opens the door" to single payer health care. Nevermind it will close the hospital door to thousands that need life-saving treatment right now.

He tells us that the gathering of synophants around Trump means he won't be around long:


The combination of Mulvaney, John Bolton and Secretary of State Mike Pompeo is a lethal one even for Trump’s political survival. He’s trying to get sycophants around him, which is usually a late stage in the collapse of a regime.

His reading of history is meant to comfort and disarm us, when we should be most alarmed because that is not the lesson of history. Adolf Hitler had gathered his most important sycophants, including Joseph Goebbels, Rudolph Hess, Hermann Göring, and Heinrich Himmler as early as 1925, hardly the late stage in the collapse of his regime.

This Monday, the US government is going into a second day in a huge fight over what Nader called "a porous wall that is eroding farmer property values and ranchers on the Mexican border." The campaign to build the southern border wall is about distracting people from the real problems we face with fear of brown people. All the rhetoric ostensibly about border, is really about building a fear of the brown caravans. It certainly isn't about stopping drugs and terrorists. Unlike refugees, they are very mobile. They can and do cross the unguarded Canadian border with little trouble or controversy. Nader doesn't address the real purpose of Trump's border wall. He just thinks it won't work ["porous" - but that's not its purpose, Ralph.]  And the worst thing - it will erode property values.

When Amy Goodman asked him for his thoughts on impeachment, Nader said "We shouldn’t make a big deal out of it." Since impeaching a president is a big deal any way you slice it, it sounds like Ralph Nader opposes impeaching Donald Trump. No doubt, this position was welcomed when he appeared on Fox News the day after his DN appearance to pitch his new book on Tucker Carlson.

I registered my first Internet domain name, CosmosEng.com, in 1996, and over the years I have registered or bought many Internet domain names, sometimes on speculation. This morning I got the idea that it would be fun to own TrumpTowerMoscow.com. Since this wasn't an original idea, I wasn't surprised to find that someone else had beat me to the punch. TrumpTowerMoscow.com had already been claimed, although no corresponding website for it exists.

Instead it was parked on Godaddy, where they are offering to negotiate its sale:

It turns out that the domain name TrumpTowerMoscow.com is owned by the Trump Organization. The WHOIS database shows they first register it on 17 July 2008, which means Trump's interest in a Moscow Tower goes back over a decade. Five years later, he still kept hope alive, although there still was no website!

@AgalarovAras I had a great weekend with you and your family. You have done a FANTASTIC job. TRUMP TOWER-MOSCOW is next. EMIN was WOW!
— Donald J. Trump (@realDonaldTrump) November 11, 2013

Apparently, Trump's dream of a Moscow tower didn't die even after he became president, contrary to all his denials. The domain registration was last updated less than six months ago on 28 June 2018, the same day Trump sent out this tweet:

Russia continues to say they had nothing to do with Meddling in our Election! Where is the DNC Server, and why didn’t Shady James Comey and the now disgraced FBI agents take and closely examine it? Why isn’t Hillary/Russia being looked at? So many questions, so much corruption!
— Donald J. Trump (@realDonaldTrump) June 28, 2018 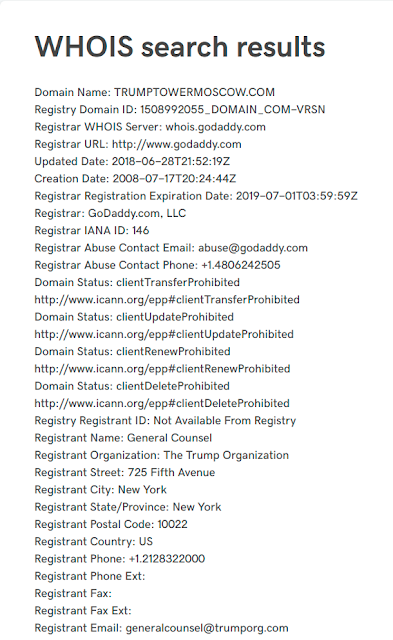 I'm seriously thinking of ponying up the seven buck, or better yet, contacting the Trump Organization directly, and making a bid. After all, it isn't being used, and Trump swears he's not interested in a Trump Tower Moscow anymore. If that is the case, might he be willing to part with it?