Tweet
UPDATED 18 Sept 2013: To date, both the mainstream media and the western nations involved in negotiations over Syria and its use of chemical weapons have acted at though the attack below didn't happen, in fact they haven't even acknowledged that it has been alleged. I said below that this was most probably a test by the Assad side to see how the West would act. Now I see the first mention of something like this attack in the mainstream media and it is the Russians who are forcing it into daylight. From Reuter, 18 Sept 2013, we have:

Russian Foreign Minister Sergei Lavrov said on Tuesday the investigation was incomplete without examination of evidence from other sources and that suspicions of chemical use after August 21 should also be investigated.

The use of chlorine clearly sets up this attack to be blamed on the opposition and the silence on this attack by the mainstream media and the Obama administration (In the hope that they could just sweep this inconvenient attack under the carpet, so to speak?) now allows the Assad regime and friends to "reveal" this attack in a manner of their choosing. Obama is being so played on this!
Reports are coming in from activists in Jobar, in the Damascus suburbs, claiming that there was new poison gas attack by the Assad regime in the early morning Thursday. This time chlorine gas was used and 25 people have been affected.


Assad forces dropped poisonous gas bombs near Jobar district’s police station about an hour ago, causing several non-life threatening injuries. The bombs seem to contain a chlorine substance which caused suffocation, convulsions and extreme sweating. Residents at first feared sarin had been released once again in the area, causing panic to ensue as a result of the last chemical weapons attack on the area by the Assad regime three weeks ago.

Regime forces continue to clash with the Free Syrian Army (FSA) in the area on the Southern Bypass near Zamalka city, Jobar district and the Abbasiyeen front line. Regime forces are also shelling the area with artillery.

The Assad regime has been bombarding the Jobar district for some time now, as these earlier reports from SNN makes clear:


It is a history of regime attacks such as these that makes it obvious to the people on the ground who is attacking them with chemical weapons. Many of those confused by regime claims of innocents will not have even heard of Ghouta before it became the target of a chemical attack. This will also be he case with Jobar.

This attack seems to be designed to confuse the political landscape even more. So far it doesn't appear to be a very big attack, no fatalities have been reported, and the substance, chlorine, makes it the most basic of chemical weapons and relatively easy to manufacture.

This attack will almost certainly be blamed on the rebels and will create a new big problem for Obama just when he thought he had a way out.

We have this map of the affected area: 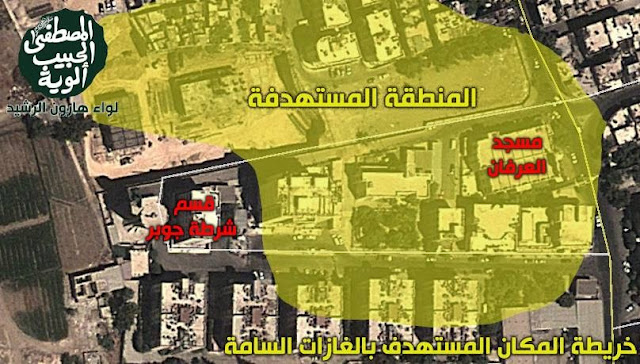 Which is accompanied by this description:

Feeding that to Google Translates, we get this:


Mustafa Habib brigades - the banner of Harun al-Rashid Front Jobar
Details use Elmejrmyin the Alosudaian tear gas Bjober the
After midnight of the date 12/9/2013
Gangs of treachery and aggression and stationed in Jobar police department
And within the desperate attempts of progress eastward, criminal بفعلتها dropped bombs gas (chlorine gas)
Of Talakiet section with Alonrega rifles and then immediately fired smoke bombs under the cover of bullet to secure the infiltration of some of the dogs Assad
And thanks to God and Menna it was intrusion prevention, frustration and injury of a number of dogs and stamens targeting Altalakiet of the building department Jobar
.........
And the spread of gas to injuries among people in the vicinity of section
Record them because six cases of suffocation, were processed and thankfully
-------
And chlorine gas is one of internationally banned weapons and classified in the same category for gas sarin
-------------------------------------------------- ----------
Information Office of Harun al-Rashid Brigade
Allahu Akbar and Glory to God and His Prophet and the Muslims

Below are some of the videos of this incident that have been posted to YouTube:


Footage of one of the victims posted Thursday [English Subtitles]