Tweet
It would seem that both the mainstream media and the non-interventionist Left share one feature in common when it comes to counting dead Syrians, they prefer smaller numbers. It's almost as though they think they can lessen the tragedy by reporting the smallest numbers.

This characteristic was brought into sharp relief in the past several weeks around disputes over how many Syrians where killed by poison gas in Ghouta on 21 August 2013. Whereas the initial reports from activist put the numbers between 1300 - 1,729, the Obama administration reported a very precise number of 1429 people, including 426 children.

The media has been reporting that the SOHR is saying that the number killed was much lower, less than 500, and that number, the SOHR number, is the one much of the mainstream press and non-interventionist Left tout as the more creditable accounting of the Ghouta chemical weapons victims.

What I find interesting is that I can't find where the SOHR says about 500 Syrians were killed in that chemical attack, those citing it never provide a link to SOHR, but SOHR has said clearly, on 1 September 2013, that 110,371 Syrians have died in this conflict and I have yet to hear that figure used by any mainstream media or non-interventionist Left outlet [UPDATE - except HuffPost - and more w time], they all refuse to update the earlier 100,000 deaths figure. We have been hearing that same figure for months now, as if people weren't still dying. That's why they can argue "What's the rush?"

For example, all these media outlets that were saying 100,000 have died in the Syrian conflict before 21 August, continued to use that 100,000 figure even after they reported a thousand new deaths from the chemical attack. What wrong with that math?

So it would appear that they cherry pick the numbers they like. Since the SOHR number for the deaths from the chemical attacks on 21 August is one of the lowest. they will tout it, but since their estimate for the total deaths for the conflict hits a new high, they will ignore it for as long as possible.

P.S. Those wanting to believe the lower numbers should remember that Doctors Without Borders reported that over 3,600 chemical weapons victims were treated at 3 hospitals they are affiliated with, of which 355 died. That was not 355 deaths total, dead people general aren't brought to hospitals, that was 355 people that died in those hospitals.

We also have to wonder if any of the other 3,245 victims that were treated, and other survivors like them, subsequently succumbed.


From this weekends "Hands off Assad" Rallies 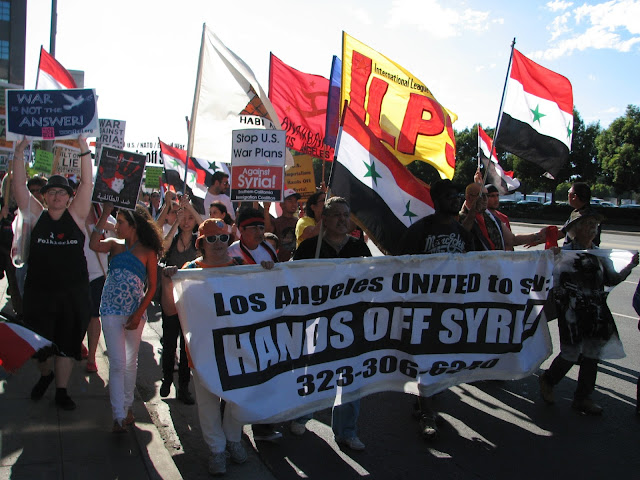 Click here for a list of my other blogs on Tunisia, Egypt and the Arab Spring
Posted by Linux Beach at 8:47 PM