Tweet
For three days after the sarin gas attack that murdered over a thousand Syrians, a third of them children, in suburban Damascus on 21 August 2013, the Assad Regime denied that any such attack had even happened. As the videos and eyewitness reports began to come out, that position became untenable, so the Assad Regime started saying "Well then, the rebels must have done it."

The Left and the Peace and Just Us* movement in the United States is so thoroughly infiltrated with Assad apologists, and other opportunists more comfortable in blindfolds, that many readily jumped on this "blame the victims, let Assad off the hook" bandwagon.

I find what these people have been doing, marching under the flag of the fascist dictator and embellishing his trash, despicable. 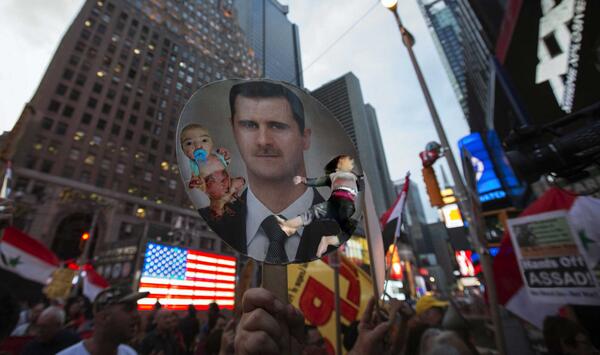 One of the more popular theories of how the opposition gassed its own people was a story published by Mint Press. This story, in addition to absolving Assad of any responsibility for the attack and putting the blame squarely with the rebels, had many elements in common with the sort of racist saga were the bungling, stupid [sand] niggers, acting at the behest of some rich white Jew, in this case played by the Saudi Prince Bandar, ends up doing themselves in by a stupid accident.

The truth about the opposition in Ghouta is quite different. Far from bungling, their defence of the community has been so through and effective that months of bombardment with convention bombs has failed to dislodge them, and even with the sarin gas attack, followed by weeks more of Assad Regime bombardment, it still has not fallen to the regime! This is the Revolution Undefeated!

The Mint Press saga is that Prince Bandar gave opposition fighters a "huge gas bottle" and they mishandled it in a tunnel.


“We were very curious about these arms. And unfortunately, some of the fighters handled the weapons improperly and set off the explosions,” ‘J’ said.

Idiots! Buffoons! At least that's what I would think if I believed it and as improbable as the idea that a gas spill in one location could kill people in seven locations is, there were many on the Left who did.

The entire "proof" offered by the Mint Press story was the testimony of certain unnamed people in Ghouta as reported by the two journalists credited with the story, Dale Gavlak and Yahya Ababneh. They offered no physical or recorded evidence. The main offer of credibility for these otherwise unknown reporters was that one, Dale Gavlak has been associated with AP.

Now we have this statement from Dale Gavlak saying that she had nothing to do with this article:


Mint Press News incorrectly used my byline for an article it published on August 29, 2013 alleging chemical weapons usage by Syrian rebels. Despite my repeated requests, made directly and through legal counsel, they have not been willing to issue a retraction stating that I was not the author. Yahya Ababneh is the sole reporter and author of the Mint Press News piece. To date, Mint Press News has refused to act professionally or honestly in regards to disclosing the actual authorship and sources for this story.

I did not travel to Syria, have any discussions with Syrian rebels, or do any other reporting on which the article is based. The article is not based on my personal observations and should not be given credence based on my journalistic reputation. Also, it is false and misleading to attribute comments made in the story as if they were my own statements.

Antiwar.com to its great credit, has issued a retraction and apology, saying:


The staff of Antiwar.com sincerely and deeply apologizes for being a part of spreading this article. We also apologize to Dale Gavlak.

I will be looking for the retractions and apologies from the other publications on the list above and as they come in, I will also highlight their names in bold. If these publications have half the integrity of antiwar.com, they should all be bold soon.

And I am patiently waiting for the Left to find its true self and expel these apologists and opportunists from its ranks.

UPDATE 22 Sept 2013: There is more from Dale Gavlak, a response from Mint Press, and more on Yahya Ababneh including the thesis that the original source for this story might be Russian.

As the facts become know, the retractions and apologies can be expected to start trickling in. We have this statement from FAIR, who otherwise simply choose to strike-through all references to Dale Gavlak in their existing story:


Without Gavlak's byline, and with the allegations of unprofessional behavior on the part of Mint Press News, there's little reason to take the Mint Press story seriously. We leave this post up for the historical record.

Click here for a list of my other blogs on Syria
Posted by Linux Beach at 2:54 PM