Syria completely cut off Internet access today...if you are in contact with someone over there, pass along these dial-up lines. Dial up Internet may still work with these providers:

Assad strikes while world attention is focused on Palestine bid at the UN. 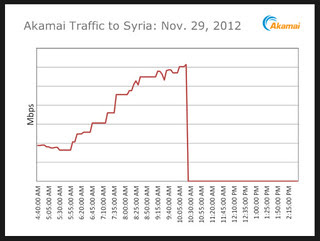 After seeing how well attempting to shutdown the Internet worked for Mubarak in Egypt and Qaddafi in Libya, the Assad regime has mostly left the Internet alone.

Today, Syria went off-line to a completely unprecedented degree amidst reports of massive killing of those opposed to the Assad regime in Damascus.

Earlier this week, the Syrian Observatory for Human Rights said the death toll in the Syria conflict had reached the 40,000 mark, so this is a very bad sign.

From Slate we have this report today:

The research firm Renesys reported this morning that Syria’s international Internet connection effectively shut down starting at 12:26 p.m. local time (5:26 a.m. eastern time) Thursday. The firm earlier estimated that 92 percent of all routed networks in the country were offline. Its latest report, however, says that “all 84 of Syria's IP address blocks have become unreachable, effectively removing the country from the Internet.” The AP is reporting that a second U.S.-based Internet-monitoring firm, Akamai, also shows Syria entirely offline.

Meanwhile, scattered reports via Twitter suggest that some of the country’s landline and cell phone connections may also be experiencing problems, though that has not been confirmed. An AP report earlier this morning cited anti-government activists blaming the government for the shutdown. It noted that “the government has previously cut phone lines and Internet access in areas where regime forces are conducting major military operations.” But a total shutdown is unprecedented.


The Syrian Local Coordinating Committees has issued the following statement:

In a move which raises fears that the regime is preparing for something, the criminal Syrian regime cut all communications (cellular networks, landlines and the internet service) in most areas of Damascus, which is the capital, and in its suburbs. In addition, communications were cut in most areas in the governorates of Hama, Homs, Daraa; in all areas in the governorates of Tartous and Swaida; and in some cities in Deir Ezzor and Raqqa.

The Coordinating Committees hold the regime responsible for any massacres that would be committed in any Syrian cities after such a move was made. Also, they call upon the world to move quickly and to take practical steps to protect civilians from the regime's crimes."

The Syria government is saying the Internet was brought down by terrorist. We know that much is true because only Assad regime has that power.

Anonymous is in this fight too:

Helo attack in Damascus. One of the few images to emerge today

From yesterday while they still had Internet. So what do you think is happening today.
Can't get the sounds of him screaming out of my head. Little boy wounded in Aleppo. Syria

Graphic #Aleppo:dead & injured being pulled out from rubble in Zebdiyeh area after shelling with barrel bombs youtube.com/watch?v=H40EsE… #Syria

just a thought about #Syria: Regimes who severed the internet ended up falling within days after they did that. Egypt, Tunisia, and Libya

write pres.obama to protest inaction re #syria. ask him how many people have to die b4 he's willing to lift a finger?whitehouse.gov/contact/submit…

Message placed by Anonymous on hacked Syria Embassy website in English and Arabic. I have copied only the English here:

To our heros in the Free Syrian Army.. our hearts and souls are with you those of whom sacrificed their blood and lives for us, may Allah reward you all the good and I find no words enough to address you may Allah protect and be with you

To Bashar 'the duck' who lacks legitimacy and sanity do you see fathers crying their children? soon you will be in their shoes if Allah's will

To Asmaa, crazy president's wife. Do you see women crying their husbands? soon you will be in their shoes if Allah's will

To United States and Europian countries, you claim that you protect the world, help the oppressed and claim democracy. But our revolution exposed your real faces and showed humanity that you are advocates of your own interests and that you don't have a humanitarian principle in what you claim, you only raise those banners to occupy nations, inslave their people and steal their treasures just like you did in Iraq and Afghanistan and other places, and maybe soon in Mali

To the neutrals in Syria: most of the Syrian neutrals are non-Mulims like our christian brothers and druze brothers and others from other communities, my message to them, Aren't we brothers? Aren't we fighting for our joint dignity and to make a better Syria for tomorrow and the most beautiful country in the world? Aren't you suffering oppression just like us? or your saying to your selves that if those win then we'll get our freedom without sweating for it? I ask not to share the revolution gain with any party that didn't come to its aid and stood aside, otherwise join the freedom and dignity's revolution

To the Alawite community: to the grandsons of Saleh Al-Ali, Bashar is abusing you, killing you and us just to save his precious occupied place, did Bashar claimed you kings in Syria? Are you living a better lives than us? The answer is clear, maybe you live worse than millions of Syrians, you are our brothers (except for the thugs and murderers among you) please abandon the regime now and join the revolution before it's too late and believe me if you don't join the revolution you will lose alot because you have crossed all the humanitarian and religious red lines against the Syrian people

I remember Anonymous had Tunisian Anons two years ago when this whole thing kicked off.

The Internet Society has issued the following statement:

On behalf of Lynn St. Amour, President and CEO, and the Internet Society Board of Trustees:

Emerging reports from various organizations and individuals indicate that international Internet connectivity was shut off in Syria today. The Internet is an open, global medium for communication, idea exchange, empowerment, and innovation. Access to the global Internet is a crucial enabler of human rights.

As with previous actions to block Internet traffic in Egypt and Libya, the effect of cutting off Internet traffic – ceasing the flow of information in and out of the country – is a serious action. It harms not only the citizens of Syria, but also Syria's economy and society at large. The Internet Society stands with other organizations around the world in calling for Internet access to be restored with all due speed and cooperation so that vital services can continue to function and citizens won’t be further impacted.

First and foremost, the Internet Society joins with the rest of the world in its utmost concern about the safety and security of the Syrian people. Previous cases where such actions were deliberately taken have proven not only to be harmful, but to be ineffective. The Internet Society hopes that the volatile situation in Syria will come to a peaceful solution and that the citizens of Syria will soon be able to join the rest of the world in having their voices heard online.

Renesys Blog reports that only 5 networks on the Syrian link remain alive and that,

These five offshore survivors include the webservers that were implicated in the delivery of malware targeting Syrian activists in May of this year.