Panetta: Unilateral U.S. Military Intervention in Syria Would Be a Serious Mistake

The word "unilateral" makes his response unresponsive. There can be no question of "unilateral" US action against Assad because France, Turkey, and a number of other countries have already signaled their willingness to go much further than the US in fighting Assad. It is the US that is holding them back. Adding "unilateral" makes his statement easy to agree with, but it is a canard, it makes it completely unresponsive to the world situation because nobody is calling for "unilateral U.S. military intervention."

But Panetta's statement raises a question: It would be "serious mistake" for who?

Would it be a "serious mistake" for humanity as a whole?

Or would it be a "serious mistake" for US imperialism, Israel and the Obama campaign?

There are different interests represented, so "serious mistake" for who? Please, you are not being clear.

Because I don't think taking down the killer who has his gun aimed at me would be a "serious mistake."

And I want the police to try to talk him out of it first, but I hope that they won't limit themselves to verbal remedies.

I don't think that using measured violence to take down a hijacker or a suicide bomber is necessarily a "serious mistake."

And I don't think this father, hugging his daughter who just had her head blown off, [picture omitted from the Daily Kos version {see note}], thinks it would be a "serious mistake."

“If you are neutral in situations of injustice, you have chosen the side of the oppressor. If an elephant has its foot on the tail of a mouse, and you say that you are neutral, the mouse will not appreciate your neutrality.
--- Bishop Desmond Tutu

I know that many people look upon the US role in the Syrian Civil war as that of a neutral, or even one of benign support for the rebels.

Others see in Syria not a war between sectarian factions, but a largely non-violent popular uprising against a police state that has been forced over to self-defense and armed struggle by 18 months of regime violence.

They see an extremely uneven fight in which the Assad regime, with material and political support from its allies, Russia and Iran, is seeking to crush any but the most tame opposition with massive applications of violence that began with snipers shooting unarmed demonstrators, and when that failed to stop the protests,

Its not honorable to watch a woman being raped but if she fights back you can say "You 2 should stop fighting!" #Syria #FSA #Assad #UN

escalated to the use of attack helicopters, jet planes dropping bombs, long range artillery firing cluster munitions, and tanks fire supporting goons that go home to home and slaughter anyone they find.

Most agencies have given up trying to keep an accurate body count but many believe it is now well above 30,000. Most of these are civilians and many of them are children The UNHRC expects as many as 700,000 Syrians will have fled their country by the end of the year and there is no end in sight. This past Wednesday saw the bloodiest day of the conflict so far. 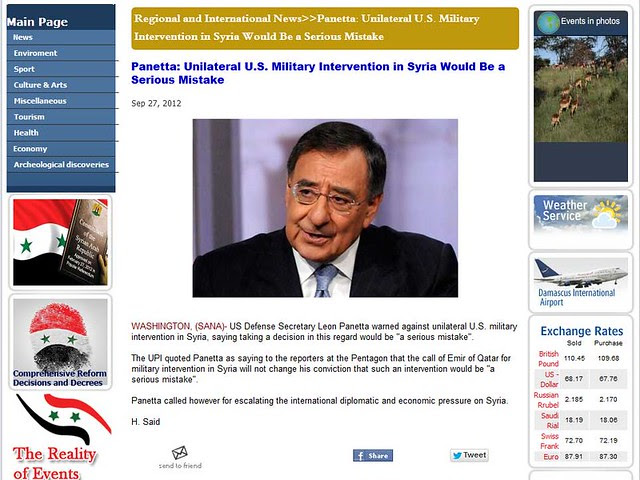 Panetta: Unilateral U.S. Military Intervention in Syria Would Be a Serious Mistake
Sep 27, 2012

WASHINGTON, (SANA)- US Defense Secretary Leon Panetta warned against unilateral U.S. military intervention in Syria, saying taking a decision in this regard would be "a serious mistake".

The UPI quoted Panetta as saying to the reporters at the Pentagon that the call of Emir of Qatar for military intervention in Syria will not change his conviction that such an intervention would be "a serious mistake".

Panetta called however for escalating the international diplomatic and economic pressure on Syria.

#Obama to #Syria: "I give U nothing but fine flowing words - U will get no arms - & I will prevent U getting weapons to resist air attacks"

To understand why the Syrians being slaughtered by their government, and people around the world desperate to see this slaughter stop, abhor Panetta's statement on the one hand; and why the Syrian state news agency would publish it approvingly and without criticism on the other, is to understand why an increasing number of people in Syria and around the world see the US position as one that is favorable to the murderous Assad regime.

The opposition knows that, at this point, only an armed response to Assad's violence can bring any meaningful relief to the Syrian people. The regime also knows that Panetta's threat of "escalating the international diplomatic and economic pressure on Syria" will not stand in their way of murdering all Syrians that oppose it.

They see these repeated promises that the Obama administration will not favor military action against the Syrian dictatorship as green lighting Assad's escalation of violence against his own people.

On 6 October 2012, a large part of the anti-war movement will raise the demand:


Hands Off Syria!
Paradoxically, that is also the demand of the Assad regime and the US government. The stars are aligned.

Sorry for the profane language but this is exactly how most #Syria|ns feel at the moment fb.me/F8xGm5mW