Fake Houla Massacre Photo: Was the BBC set up?

Tweet
On May 27th the BBC News website used an Iraq photo to illustrate the Syrian massacre. The picture, which showed rows of bodies wrapped in white cloth laid out on the ground ran under the headline "Syria massacre in Houla condemned as outrage grows." The picture is labeled "PHOTO FROM ACTIVIST" and is accompanied by the caption:

This image - which cannot be independently verified - is believed to show the bodies of children in Houla awaiting burial. 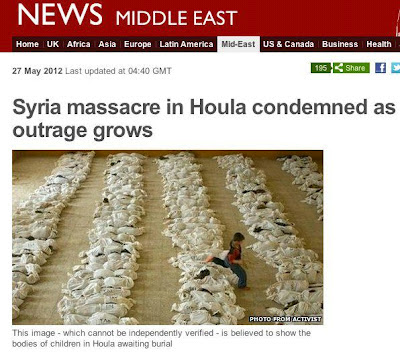 The photo had actually been taken by Marco di Lauro in Iraq in 2003 and is featured on his website. According the Telegraph:

Photographer Marco di Lauro said he nearly “fell off his chair” when he saw the image being used, and said he was “astonished” at the failure of the corporation to check their sources.

The fake image was exposed and taken down the same day, in fact it was up for only 90 minutes, but that hasn't stopped various "Friends of Assad" from using it to imply that events in Syria are a creation of the western media. From Alex Jones' InfoWars we get Phony ‘Houla Massacre’: How Media Manipulates Public Opinion For Regime Change in Syria

Even the BBC have gone so far as to run 9 year old photographs from Iraq, and sell them as from this latest massacre of children in Syria. Any other foreign media outlet in the UK would have its broadcasting license pulled for such a propaganda stunt. In the face of such damning manipulation, why then would so many people still believe the mainstream media’s version of reality in countries like Syria?

This website also use the photo snafu to imply the massacre is fake: Houla Massacre a fake? BBC illegally uses Marco Di Lauro's image of Iraqi victims as propaganda against the Syrian government (Must see!)

From the pro-Assad Syria 360 we get the headline PHOTOGRAPHER, MARCO DI LAURO, EXPOSES BBC’S USE OF HIS IRAQ PHOTOS AS PROPAGANDA FOR HOULA MASSACRE From the Iranian PressTV we get Truth behind BBC’s vicious tactic

Britain’s state-run broadcast BBC has been heavily criticized for using a fake photo of Iraqi dead children in order to sell a new NATO-led invasion, this time targeting Syria.

And from the pro-Russia Information Clearing House we get Engineering Consent For An Attack On Syria, Truth behind BBC’s vicious tactic and from Russia Today Oops, BBC: Iraq photo to illustrate Houla massacre?

And so it goes all over the blogisphere among the network of websites and bloggers that developed a new level of sophistication in their failed defense of Mummar Qaddafi, and are now applying that same technique of flooding the Internet with their story to obscure the fact that a massacre really did happen in Houla.

My question is: What is going on here? Clearly the BBC made a blunder by publishing the picture as it did. They claimed it was an unverified photo from an activist and I don't think anyone is seriously claiming that they used di Lauro's photo on purpose. It was on his website. They would have had to know it would be exposed as a fake in short order. They would have been setting themselves up for a fall.

No, I think the BBC was setup by someone else. Most certainly the "Activist" that sent the photo to the BBC. That entity almost certainly knew the photo was fake, probably got it from the di Lauro website, and should have known it would be exposed as a fake in short order. Therefore their purpose was certainly not to expose the crimes of the Assad regime against the Syria people but instead to obscure then. All of these outlets harping on the fake photo are also using it to imply that the massacre was fake.

The Assad government has been carrying out horrific crimes in Syria for 14 months. As with the Houla massacre, we know that the blame lies squarely with the Assad government because much of the killing is done with heavy weapons the opposition doesn't have. With regards to Houla, even the Russians and Chinese can't escape giving Assad part of the blame because many of those killed were killed by artillery, but they, like the other Assad supporters on the left, somehow see it as some sort of joint operation in which the Assad forces first used tanks and artillery to kill the anti-Assad civilians and then "armed terrorist gangs" [ATG] opposed to Assad, went in and killed the anti-Assad civilians that hadn't been killed by the pro-Assad shelling so that those civilian deaths also could be blamed on Assad. This is the kind of trash they are trying to peddle.

Now this photo gets sent to the BBC and exposed. This is known as creating strawmen so that you can burn them down. There have also been fake videos that have been exposed as obvious fakes. The claim is that they were uploaded by "Activists," but who knows?

Anyone can make a fake video and post it just as anyone can send a fake picture to the BBC, but over a hundred thousand videos of the struggle in Syria have been posted to YouTube in that last year and they make up a very convincing record that can not be faked.

The only mistake the BBC made was publishing a picture that they couldn't verify from Syria, but amidst all the killing Assad is doing, he won't allow the BBC or other media he doesn't control to report directly so they are forced to rely on unverified reports from citizen journalist in the region. I would suggest that the true purpose of the fake photo episode is to have a chilling effect on the willingness of the major media to publish what may be the only images they can get of the crimes being committed by Assad in Syria.