This extraordinary data set derives from 680 Syria-related entities or domain names, including those of the Ministries of Presidential Affairs, Foreign Affairs, Finance, Information, Transport and Culture.

Over the next two months, ground-breaking stories derived from the files will appear in WikiLeaks (global), Al Akhbar (Lebanon), Al Masry Al Youm (Egypt), ARD (Germany), Associated Press (US), L’Espresso (Italy), Owni (France) and Publico.es (Spain). Other publications will announce themselves closer to their publishing date.

WikiLeaks founder Julian Assange said: "The material is embarrassing to Syria, but it is also embarrassing to Syria’s opponents. It helps us not merely to criticise one group or another, but to understand their interests, actions and thoughts. It is only through understanding this conflict that we can hope to resolve it."

At this time Syria is undergoing a violent internal conflict that has killed between 6,000 and 15,000 people in the last 18 months. The Syria Files shine a light on the inner workings of the Syrian government and economy, but they also reveal how the West and Western companies say one thing and do another.

The range of information extends from the intimate correspondence of the most senior Baath party figures to records of financial transfers sent from Syrian ministries to other nations.

The database comprises 2,434,899 emails from the 680 domains. There are 678,752 different email addresses that have sent emails and 1,082,447 different recipients. There are a number of different languages in the set, including around 400,000 emails in Arabic and 68,000 emails in Russian. The data is more than eight times the size of ’Cablegate’ in terms of number of documents, and more than 100 times the size in terms of data. Around 42,000 emails were infected with viruses or trojans. To solve these complexities, WikiLeaks built a general-purpose, multi-language political data-mining system which can handle massive data sets like those represented by the Syria Files.

In such a large collection of information, it is not possible to verify every single email at once; however, WikiLeaks and its co-publishers have done so for all initial stories to be published. We are statistically confident that the vast majority of the data are what they purport to be.

We would like to thank our sources, technical team, donors and defenders without whom this contribution to the historical record would not be possible. https://wlfriends.org/

London (CNN) -- WikiLeaks said Thursday it has begun publishing some 2.4 million e-mails from Syrian politicians, government ministries and companies dating back to 2006.

The e-mails, which are in a range of languages including Arabic and Russian, come from the ministries of presidential affairs, finance, information and foreign affairs, among others.

According to WikiLeaks, the e-mails "shine a light on the inner workings of the Syrian government and economy, but they also reveal how the West and Western companies say one thing and do another."

I have already been researching the connection between UN and Arab League representative Kofi Annan, his son Kojo Annan and the Assad regimes involvement with them in the "oil for food" program corruption because I have received tweets implying that Assad had some leverage on Annan because of what he knew about those old days. This new leak should help me get at the truth and answer many other questions as well.

Watch this space for breaking developments around this today. 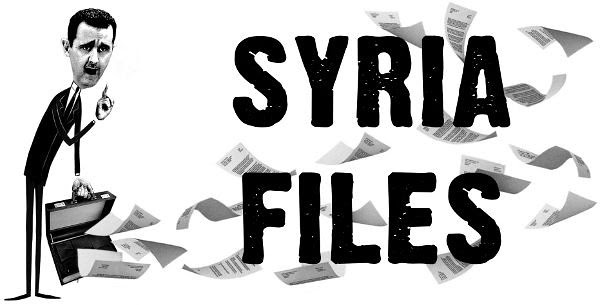 This is the spirit of internationalism. The Free Syrian Army welcomes a Libyan medical team somewhere in Syria | July 4, 2012