Al Jazeera English Live is reporting intense armed conflict in Damascus, the capital of Syria at this hour 8:00am pst. This is a new development!

Here are the latest tweets I am seeing. Look for this in the evening news but remember you saw it here first at the Daily Kos:


Regime forces are shelling Al-Tadamoun, a southern neighborhood of the capital #Damascus, while it's surrounded by tanks and troops. #Syria

in Palestian camp RT @KareemLailahHeavy explosions are being reported in Tadamon neighborhood in #Damascus. #Syria

Heavy explosions are being reported in Tadamon neighborhood in #Damascus. #Syria

From Al Jazeera Live Blog we have these reports:

Opposition fighters battled Syrian government forces in districts in the south of Damascus on Sunday, some of the most intensive daytime fighting yet inside the city limits of the capital.

Activist Samir al-Shami, who spoke to Reuters by Skype from Damascus, said the fighting was under way in the poor al-Tadamon district, after a night of sustained battles in the nearby Hajar al-Aswad district.

"There is the sound of heavy gunfire. And there is smoke rising from the area. There are already some wounded and residents are trying to flee the area," he said, showing live
video images of smoke visible over the skyline.

"There are also armoured vehicles heading towards the southern part of the neighbourhood."

Syrian troops bombarded several rebel areas in several parts of the country on Sunday killing at least 25 people, a watchdog said, as an AFP correspondent reported shelling near Aleppo.

A girl was among four people killed when the army rained shells on the town of Rastan, a rebel stronghold in the central province of Homs held by insurgents since February, the Syrian Observatory for Human Rights reported...

The eastern oil city of Deir Ezzor also came under heavy shelling and five people, including two rebels, were killed, the watchdog said, adding that three others died in fighting between troops and rebels near the Albu Omar oilfield.

...In the central province of Hama, two civilians were killed and others wounded in bombing of Qalet al-Madiq. In the same region, the military also stormed the villages of Jreires and Maarzaf, using heavy weapons.

The so-called Kurdish mountains region of Latakia were also the target of heavy bombing, while in Damascus soldiers were wounded in an explosion near the southern neighbourhood of Al-Zuhur, the Observatory said.

In the city of Daraa, the cradle of the uprising against the regime, a civilian and two rebels were killed in an assault by government forces, while there were reports of casualties among regime troops.

In the province of Idlib, near the Turkish border, three soldiers were killed in fighting with rebels in areas of Jisr al-Shughur from where sounds of explosions could also be heard, the Observatory said, adding that two civilians were also killed at the entrance of Salqine village by machine gun fire.

An AFP reporter said there was also steady bombardment for nearly six hours about 30 km west of Aleppo, Syria's second city and commercial hub, although there were no immediate details of any casualties.

My diary last night that reporter loud explosions in Damascus must have been the start of this!


Panicked people are closing shops and leaving the Yarmouk camp because of army shelling. | 15 July 2012


Residents fleeing their homes in Attadamon neighborhood in Damascus, b/c of shelling! | 15 July 2012

More videos of people fleeing - a lot of these are starting to show up - more than I will post. Times like this i wish that I did believe in god so I could say "God help them" because it is becoming increasingly clear that our humanity won't.


Maybe the Free Syrian Army is getting ready for a counter strike?


Cut off all transportation corridors between #Damascus and #Homs.Isolate #Homs then take out those artillery pieces.#Syria

SkyNews: The highway to #Damascus int'l airport has been blocked and the regime army is shelling areas of the capital. #Syria

Be sure to read my most important diary yet:
Does Syria's Assad have something on Kofi Annan? 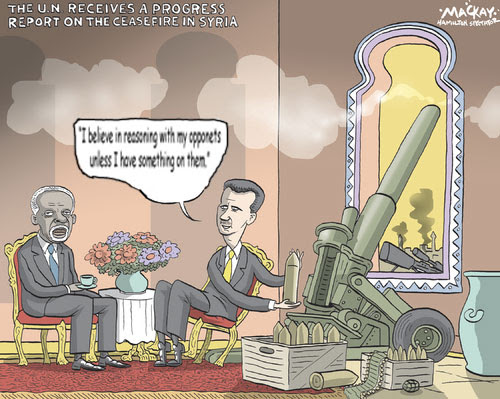 Heavy clashes have erupted in Damascus between opposition fighters and government forces as the Red Cross says the country is experiencing civil war.


Activists in the capital said the Syrian army had closed down the road to the airport and was trying to surround fighters in southern neighbourhoods in an attempt to crush unrest inside Damascus.

Speaking via Skype, opposition activist Samir al-Shami said the fighting Tadamon followed a night of running battles in the nearby Hajar al-Aswad neighbourhood.

"There is the sound of heavy gunfire and there is smoke rising from the area. There are already some wounded and residents are trying to flee the area," he said.

"There are also armoured vehicles heading towards the southern part of the neighbourhood."


The UK-based Syrian Observatory for Human Rights said it was the "most intense" fighting in the capital since the beginning of the 16-month uprising against the rule of President Bashar al Assad.

"The regular army fired mortar rounds into several suburbs" where rebels of the Free Syrian Army are entrenched, Rami Abdel Rahman, the head of the opposition group, said.

He said the fighting was heaviest in the Tadamon, Kfar Sousa, Nahr Aisha and Sidi Qadad neighbourhoods.

"The security forces are attempting to take control of these neighbourhoods but so far they have not succeeded," he added.