I'm a guy who never completed college, and English was never my best subject when I was in school, but if there is one thing I have learned it is that help can sometimes come from the most unlikely quarter. I know you have lengthy academic credentials when it comes to engineering and rocket science, but I've been reading your recent and varied reports about the sarin massacre that took place in Khan Sheikhoun, 4 April 2017, and it would appear that you have some issues with reading comprehension.

I know you faced a certain amount of ridicule along these lines because in critiquing the French Report, you "missed" that when they referred to the sarin attack that occurred on 29 April 2013 in Saraqib, they were talking about a different attack than the one that occurred in Khan Sheikhoun last month. So I'd like to begin with some words of encouragement. When last you wrote and made a "correction" to that original critique of the French report, you said you thought that report focused on the sarin attack of 29 August 2013, and "does not report on the details of the attack on April 4." With this new paper from you, I see that you have found those details. This shows that you are making progress already!

But I've just had a look at your most recent revision, publish on the Putin mouthpiece Global Research, dated 1 May 2017, and it looks like you still have some problems with reading comprehension, so allow me to offer some helpful pointers.

For example, you quote from the French Report, and emphasis a few phrases:


c) According to the intelligence obtained by the French services, the process of synthesizing sarin, developed by the scientific Studies and Research Centre (SSRC) and employed by the Syrian armed forces and security services, involves the use of hexamine as a stabilizer. DIMP is also known as a by-product generated by this process.

d) This intelligence on the process used by the regime, which is a sign of its responsibility in the attack on 4 April, is based notably on the analysis of the content of an unexploded grenade which was used with certainty by the Syrian regime during the Saraqib attack on 29 April 2013

Upon reading that you responded:


[A]n obviously flawed investigative finding would be a product of the same combination of irrational arguments and unsound scientific evidence that the FIR used as its basis to reach a conclusion that the Syrian government must have executed in nerve agent attack on April 4, 2017 in Khan Sheikhoun.
...
Aside from the lack of a rational linkage of asserted observations, the FIR falsely claims (or implies that) the presence of DIMP is a unique indicator that the sarin found by the French at Saraqib must have been produced by the Syrian government. As it turns out, DIMP is likely to be found at any location where sarin has been introduced into the environment. In the case of hexamine, this chemical can be produced by the military explosives in a sarin nerve agent dispensing munition or from explosives produced in military attacks unrelated to the use of sarin.

Does this mean that you now agree with my critique of your initial report on the Khan Sheikhoun sarin massacre in which I pointed out that most chemical munitions use an explosive bursting charge? I went to some length to make that case because I knew I was going up against your expertise when you asserted, in looking back at the Obama White House Report on the sarin massacre of 2013, that:


For example, the report claimed that the locations of the launch and impact of points of the artillery rockets were observed by US satellites. This claim was absolutely false and any competent intelligence analyst would have known that. The rockets could be seen from the Space-Based Infrared Satellite (SBIRS) but the satellite could absolutely not see the impact locations because the impact locations were not accompanied by explosions.

Now the rocket scientist has come around to the view of the layman. The impact locations of chemical munitions are, indeed, accompanied by explosions. So you see, unity is building already!

Where I think you make a mistake in the present case is in your reading of the phrase "is a sign of." The French say "the process used by the regime" involved DIMP and hexamine "which is a sign of its responsibility in the attack on 4 April," and you go off into a lengthy discussion of how there could be other explanations for the finding of those chemicals at the sarin attack site. Once you feel you have done that, you think you have disproven:


the same combination of irrational arguments and unsound scientific evidence that the FIR used as its basis to reach a conclusion that the Syrian government must have executed in nerve agent attack on April 4, 2017 in Khan Sheikhoun.

But the French Report did not rely exclusively on the presence of DIMP and hexamine in coming to that conclusion. They talk about the tactical military situation around 4 April, the presence of specialized Syrian army units in the area, and,

They also considered UN reports that Assad had held out on the OPCW and did not voluntarily declare all his chemical weapons, and documented reports of his continuous use of chemical agents since 2013. To all of this evidence we now must also add the Human Rights Watch finding that the ordinance used in Khan Sheikhoun was an air dropped sarin bomb from the Soviet era.

So you see, the French conclusion that Assad was responsible for the sarin murders was based on many things and not just the presence of DIMP and hexamine along with the sarin at the site. Dr. Ted, you seem to think it did because you say:


the FIR falsely claims (or implies that) the presence of DIMP is a unique indicator that the sarin found by the French at Saraqib must have been produced by the Syrian government.

But that is not what they said. They claimed to have proved that sarin was used and the sarin used was like that (consistent with) sarin known to be produced by the Syrian government.

Dr. Ted, I think your misreading of the French Report this time comes from a misunderstanding of what the phrase "is a sign of" means. You seem to think it is synonymous with "a unique indicator." It is not! 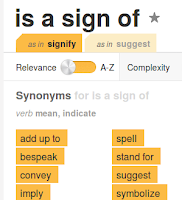 Whenever we are unsure about the meaning of a word or phrase, we should never be afraid to consult a dictionary. That is one sure way to improve your reading comprehension.  When we look up the phrase "is a sign of"  on Thesaurus.com we find that "suggest" and "imply" are among the synonyms, so it would be accurate to say the French Report says that the finding of DIMP suggests sarin from Assad's stockpile, or that the report plainly states, not implies, that the presence of hexamine implies sarin made the Syrian Army way.  They are not here saying that "is a sign of" is as definitive as a fingerprint, which would be "a unique indicator."  Your understanding of what constitutes a sign of something is far too rigid. There is no need to go off accusing the French (of all people, you know how they can be!) of being "obviously flawed" and using "irrational arguments and unsound scientific evidence."  "a sign of" is not a "unique indicator," it is merely a suggestion.

Words are important. How we use them is important. If we don't understand what we are reading, we will have trouble communicating our ideas to others. It is better to read a passage twice, even three times, before putting pen to paper in criticism. And don't be afraid to look up unfamiliar words and phrases!