Tweet
In its rush to defend Syrian President Bashar al-Assad and his regime from charges of committing the mass murder of civilians with sarin at Khan Sheikhoun on 4 April 2017, the Russian website Pravada Report made what I think is an extremely valuable and important admission:


Now the media are trumpeting that it was Assad's troops that used chemical weapons in Idlib. This is absolute nonsense, because it is Russian headquarters that supervise all combat actions in the region. Assad will not be able to use any aircraft unless the Russian command in Hmeymim gives permission for this.

Pravada Report comes out of Moscow and is seen as a Putin mouthpiece. This statement is attributed to an unnamed "Russian expert." Hmeymim air base in Latakia is the main Russia airbase in Syria and after Trump's cruise missile strike against Shayrat airbase, Assad moved all his fighters to it. The Russian high command in Syria is stationed at that base. They have advanced Russian surveillance instruments there that track the movement of all aircraft moving through Syrian airspace. Russian SIGINT [signals intelligence] and the Russian spy agency GRU are also located there. Syrian operational staff officers also work out of that base. Two days after the sarin attack, the Syrian Foreign Minister Walid al-Moallem said in a news conference @35:20:


We are coordinating on a daily basis with Russia.

Yes, that is the polite term for it. I "coordinate" on a daily basis with my boss too.

In the case of the United States military assistance command to The Republic of Vietnam [MACV], there was never any doubt about who was really running the war. Those who think Assad is still running the war just don't understand how these things work. The Washington Post, which discovered and translated the secret "status of forces" agreement that allows the Russian military to operate in Syria described it as giving Moscow "carte blanche."

If the Pravada statement is true, and that seems very likely, if "it is Russian headquarters that supervise all combat actions in the region" for their side, it means that the decision to use sarin on Khan Sheikhoun, and to bomb the hospital, were Russian decisions. It also means that anyone who looks to the United Nations to end this tragedy is a fool because those committing the atrocities have veto power over anything the UN might want to do about it. This been shown time and time again in the six years they have been attempting to put down this uprising. The UN never stopped the US from killing more than 3 million Vietnamese, and the UN will never stop Russia from killing millions of Syrians for the same reason. 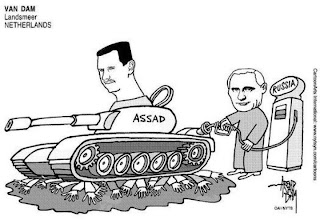 It also means that all our brave Assad Advocates with their one-sided "Cui Bono" argument that Assad had nothing to gain by using sarin on Khan Sheikhoun can pack it in, because Assad didn't make that decision, almost certainly, Putin did. Those "who benefits" questions needs to be put to Putin not Assad, and Putin operates on a much bigger playing field than just Syria. Putin can almost certainly be counted on to be more concerned that the US president he worked so hard to elect was getting into trouble because of his Russian connections than what affect a sarin strike may have on Assad's standing.

Clearly Trump has benefited greatly, not from the chemical attack of course, but from the opportunity to respond and thus stage a falling out with Putin just when he needed it badly. Before the attack, the major news story in the US was the growing scandal about Trump's ties to Moscow. The new revelations around this story haven't stopped coming since the sarin attack. Two days after the attack, Rep. Devin Nunes attempts to sabotage the congressional investigation fell apart and he was forced to step aside. Then Paul Manafort announced he was registering as a foreign agent. It was revealed that a FISA warrant had been issued for Carter Page. European intelligence agencies started talking about what they had, and we found out the FBI has an investigation going. Most likely both Trump and Putin knew this, and much more was about to be coming out as the sarin attack was being planned. The sarin attack, at a cost of 87 Syrian lives, was just the set up, the payoff was Trump's attack on the airbase.

Two things make the attack on Shayrat airbase look like a staged rather than a real confrontation:

1.) We know that Trump gave the Russians plenty of advanced notice, so they and the Syrians could get their people and planes safely away before the attack. As a result, they suffered really minimal losses. Trump didn't even bomb the runways. As a result, they were able to resume air operations from the base the very next day.

2.)  Russia has its most advanced air defence systems in Syria, S-300s and S-400s, and they didn't even try to shoot down Trump's cruise missiles.


[L]ater reports say that most of the aircraft based there were evacuated before the strike, and initial footage from Shayrat seems to show at least some areas of the airports, including taxiways, shelters, aprons, etc. with little or no damages.
...
According to Pentagon, the Russians were informed ahead of strike.
...
Noteworthy, the TLAMs [BGM-109 Tomahawk Land Attack Missiles ] flew across the MEZ (Missile Engagement Zone) of the S-400 missile battery the Russians deployed to Latakia to protect the Russian air contingent deployed there in 2015.

Did Russia’s most advanced anti-aircraft defense system detect the missiles? For sure there are no reports of any of the BGM-109 intercepted by the S-400.

Designated SA-21 “Growler” by NATO, the S-400 is believed to be able to engage all types of aerial targets including aircraft (someone says even VLO – Very Low Observable ones), drones and ballistic and cruise missiles within the range of 250 miles at an altitude of nearly 19 miles. Equipped with 3 different types of missiles and an acquisition radar capable of tracking up to 300 targets within the range of over 370 miles, the Triumph (or Triumf) is a system made of 8 launchers and a control station.

So, at least on paper, all non-stealth aircraft and missiles would hardly be able to dodge S-400 missiles. Assuming that the Russians probably detected at least some of the Tomahawks flying fast and low towards their targets at Shayrat Airbase it’s not clear why the Triumf did not attempt to intercept any of the TLAMs launched by the US destroyers,
...
Perhaps, considered that they were informed beforehand, they simply decided to let them pass.

Why would they do that? They would have been shooting down drones, not even killing US pilots. They had that capability. Why didn't they use it? One can only conclude that they allowed the Syrian base to be attacked, and maybe that was because, as the Aviationist speculates, Trump was so nice and polite about notifying them in advance about his attack. That's warfare in the Milo Minderbinder tradition. If ever an attack seemed staged, this was it.

If we apply the "Cui Bono" test to Assad's opposition, it just doesn't work. If the argument favored by the "anti-imperialist" Left is that 2013 sarin attack that killed 1400 opposition supporters was staged by the opposition to get Obama to intervene in the name defending his "red-line," how much sense does it make for them to try the same thing with a lot less casualties with Trump, who hates Obama, after his administration just announced three times its support for Assad remaining in power? It just doesn't fly.

If we ask instead: "How would Putin benefit?" We can provide answers that really takes off. That is how Cui Bono answers the question of what happened and why in this particular chain of events.