Tweet
Although I prefer to think of the Syrian Revolution as the Paris Commune of the 21st Century, I have also called the Syrian tragedy the first holocaust of the 21st century. I continue to hope that latter characterization remains a warning and an exaggeration, but in the spirit of that sad metaphor, I would like to say that Doctor Theodore A. Postol, Professor Emeritus of Science, Technology, and National Security Policy, Massachusetts Institute of Technology is becoming one of the leading holocaust deniers of the 21 Century.

Many will say this label is unfairly awarded because what has so far happened in Syria has yet to reach holocaust proportions. That may be true. It may be more accurate to call Postol a holocaust enabler, because he is defending the mass murderers while they are committing the crime, and by doing this, he is helping them turn a string of atrocities into a holocaust. 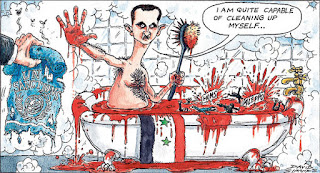 As long as Syrian President Bashar al-Assad was allowed to do his grisly work without much attention on the world stage Dr. Postol kept quiet. There were over a hundred thousand murdered before Assad used sarin in a big way in August of 2013. Then Ted Postol remerged as one of the chief investigators to argue that the Syrian regime wasn't responsible for the sarin murders of over 1400, including more than 300 children in Ghouta. He made a seemingly scientific argument that the regime could not have done it, and because of his MIT credentials, he quickly became the darling of the Assad didn't do it crowd.

Fast forward to 2017 and Assad is at it again with the sarin attack on Khan Sheikhoun, 4 April, so Postol is at it again too. Actually, Assad has been at it all along. He'd killed roughly another three hundred thousand since Postol first came to his defense, and he has never stopped killing, including with chemical. But this is the first time since 2013 that Assad has killed big time with sarin, and gotten the world's attention for it. Now Assad needs Postol's special talents again, and he's there for him.

And Postol is a rather slippery fellow. He's hard to pin down.

When both the Russians and the Syrians were coming out with a story about how they bombed a terrorist weapons depot that stored chemical weapons, Postol concocted his own story about how he could prove the terrorist exploded a chemical weapons pipe bomb in the street. Between 11 April and 14 April, he published no less than three versions of this story. The last one in Truthdig. Now that so many holes have been punched in that theory that it can't even hold our attention, he has come back to Truthdig with a "new" theory, Russian Explanation of the Mass Poisoning in Syria Could Be True, 26 April 2017. What I find incredible is that he doesn't address the earlier theory, because the sub-title of this piece should be "My Previous Truth Could Be False." He begins:


I have been examining the possibility that the April 4 attack in which a number of Syrian civilians and animals were killed, apparently by some kind of poison, hit an ammunition dump as claimed by the Russians. Videos taken on the morning of the attack show explosive debris clouds from four targets that were hit and provide strong circumstantial evidence that this Russian explanation could be true.

So far we have heard only of civilians (and animals) being killed, and assuming that is true, we have to wonder why no armed militants were killed, if this was an arms depot or chemical weapons store. Wouldn't they have been guarding it? Postol doesn't address that, instead he shows us this panorama stitched together from an opposition video of the Khan Sheikhoun attack that shows the three explosions and one puff of smoke seen in the video in one shot.

Then he tells us:


One of the clouds is quite distinctly different from all the others. The stem of this debris cloud has a base area that is five or more times larger than the cloud-stem bases of the other bomb debris clouds.

So now he is interpreting smoke signals for us. This image is actually from the video I used in my blog post criticising Postol.

There are a couple of problems with his use of these images to defend Assad. The first is that most observers of the chemical attack on Khan Sheikhoun reported that the Su-22 dropped four ordinances, 3 conventional rockets and one chemical. So the more likely interpretation of the three plumes of smoke is that they represent the conventional bombs. You wouldn't expect to see a plume like that from the chemical weapon. Why one plume is larger than the others may well have to do with what it hit, but it certainly doesn't prove it hit an arms depot. Besides, the only two large buildings in the area have been inspected both by reporters, and before and after satellite photos, and it has been determined that they were not bombed. That much smaller puff of smoke you see in the lower right hand corner on the video above in its starting position, it doesn't make a plume, it doesn't even go as high as the minaret, and is whiter. You can see it in Postol's picture too. Maybe that is where he should be looking for the chemical attack.

The second problem is that this video was uploaded to YouTube at 7:59am local time, just after the attack really happened, but both the Russians and the Assad regime insist the Syrian jet didn't attack Khan Sheikhoun until much later, close to noon. So by accepting this video as a valid record of the strike, he is acknowledging both the Russians and Assad regime are, shall we say "mistaken," even when he is arguing that they may be telling the truth!

Poor Postol. He wants so badly to please his Syrian Sister, but no matter how hard he tries, he can't seen to get it right. First he rushes to press with his own theory of how Assad didn't do it, only to discover his theory blows their alibi. So he ditches his theory to back their alibi, and in his zeal to find new proofs for them, ends up calling them out for lying again.

Then he goes off the deep end to imply it was some sort of industrial accident. Maybe they died from burning plastic!


I also have looked up data on poisonous gases that could be generated by the combustion of plastics, and have inspected photographs of the dead and dying from the Bhopal, India, chemical accident of Dec. 2-3, 1984.

How pathetic. Truthdig should publish a retraction of his earlier article, and this one.

Also on Wednesday, France issued a report on the sarin attack in Syria that is extremely detailed and claims to prove, among other things, that the sarin used on Khan Sheikhoun has been used by Assad before. The Chemical Attack in Syria - National Evaluation presented by Jean-Marc Ayrault following the Defense Council Meeting (26 April 2017) is a must read for anyone who wants to know what happened. This report is based exclusively on French intelligence, and they have been spying on Syria longer than most:


In view of the horrific attack and Syria’s repeated violations of its commitments to stop using weapons banned by the international community, France has decided to share the information at its disposal with its partners – who were informed overnight – and the general public.

The conclusions published in the national assessment – which we will be making public today – are based on painstaking investigations and analyses by French intelligence.

Naturally this became the new enemy Ted Postol had to take on and he did this on Thursday, 27 April 2017 in a piece he posted on Sic Semper Tyrannis (A Committee of Correspondence). He writes:


Attached below are data derived from the French Intelligence Report published yesterday on April 26, 2017. A reading of the report instantaneously indicates that the French Intelligence Report of April 26, 2017 directly contradicts the White House Intelligence Report of April 11, 2017. The discrepancies between these two reports essentially result in two completely different narratives alleging nerve agent attacks in Syria on April 11, 2017. The fact that these two intelligence reports allege totally different circumstances associated with the same alleged event raises very serious questions that need to be investigated and reported to the American public.

He is so confused in his haste to respond. He probably didn't take the time to read it twice before he added, with his empathise:


The French Report instead claims that there were at least three munitions dropped from helicopters in the town of Saraqib, more than 30 miles north of the alleged sarin release crater identified by the WHR.

The WHR claims that a fixed wing aircraft was the originator of the airdropped munition at the alleged dispersal site. The French Intelligence Report alleges that a helicopter was used to drop sarin loaded grenades at three different locations in Saraqib.

Both reports cannot simultaneously be true.

Actually they can. The French were talking about an attack on Saraqib that took place 29 April 2013. In that attack, the Assad regime dropped sarin grenades from a helicopter. One of the grenades failed to explode and was recovered. The French were able to compare that sarin with the sarin used on Khan Sheikhoun on 4 April 2017, almost 4 years later. This is how the French intelligence report referenced the attack on Saraqib:


c) According to the intelligence obtained by the French services, the process of synthesizing sarin, developed by the scientific Studies and Research Centre (SSRC) and employed by the Syrian armed forces and security services, involves the use of hexamine as a stabilizer. DIMP is also known as a by-product generated by this process.

d) This intelligence on the process used by the regime, which is a sign of its responsibility in the attack on 4 April, is based notably on the analysis of the content of an unexploded grenade which was used with certainty by the Syrian regime during the Saraqib attack on 29 April 2013. That mid-afternoon, a helicopter arriving from the north-east flew over the city of Saraqib at high altitude. Three unidentified objects, emitting white smoke, were dropped on neighbourhoods to the west of the city, on a north-south trajectory.

That was a small sarin attack. It never made the news, so Assad's defense was never called, and Postol paid no attention to it, otherwise he never would have fallen victim to his confusion now.

The French are also in complete agreement with Syrian witnesses and the White House Report as to the type of aircraft that attacked Khan Sheikhoun on 4 April, 2017:


b) The French services are aware in particular of a Sukhoi Su-22 bomber which took off from the Shayrat Airbase on the morning of 4 April and launched up to six strikes around Khan Sheikhoun.

This isn't rocket science, it's reading comprehension 101. If logic were a person, or even a corporation, it could probably bring a case in federal court against Postol for violating the constitutional prohibition against cruel and unusual punishment. At some point this has got to be embarrassing for MIT, even if it isn't for Dr. Postol.