Why "Jill not Hill" is a pro-Trump slogan

Tweet
The election in now less than 5 weeks away. The poll numbers are what they are, roughly: Hillary Clinton 42%, Donald Trump 41%, Gary Johnson 9% Jill Stein 2%. Can we agree that we face a binary choice here and that the election of 8 November will pick either Clinton or Trump to be the next President Of The United States [POTUS]? If that is the case, then the question of who will be the next POTUS has only two possible real-world answers and, binary or boolean logic can be applied.

Binary logic works like this: Say a question only permits True/False answers, then NOT True is the same as False. In binary math 1 == NOT 0.  Wikipedia describes the NOT operator as follows:

In a binary, or two outcome election, and that is what we face in 2016, Never Clinton equals support for Trump.

The US Green Party disagrees. They don't see being for Jill Stein, or even anti-Clinton as being pro-Trump. Those that are planning to vote for Jill Stein can say they don't want to use their vote to choose the lesser of two evils when they can use it to build a truly progressive party, and help the Greens get a small taste of the federal treasury. Those may be valid arguments but, like saying the ballot is put to better use lighting a cigar, they are arguments for using the election as a self-service opportunity, rather than for its intended purpose which is to give citizens some small say over who the next POTUS is.

It doesn't matter what the Greens hope to get out of the election, what the United States will get out of the election is our next POTUS. Since that is the point of the election, the effects of Green Party participation should be judged, first and foremost, on its effect on the final outcome which will be a President Clinton or President Trump. It is only the votes for those two candidates that need to be counted to determine the next president. For the purpose of that finding, there is no real need to tally write-in votes for others, or votes for Johnson or Stein. Those votes, like the ones that weren't casted, represent citizens who "elected" to let other voters decide who the next POSTUS will be. 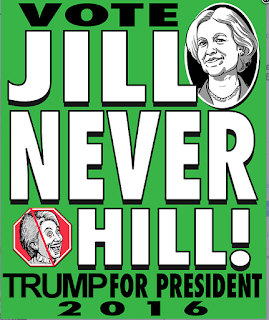 The Libertarian candidates are said to take votes equally from both Clinton and Trump. If that is true, then their effect on the final outcome will also be neutral. The same can't be said about the Green Party candidates. They are clearly trying to appeal to the more progressive voters and take them out of the presidential decision making process. This means voters that otherwise would likely vote for Hillary Clinton.

When confronted with this practical effect of the Jill Stein campaign, that it is a spoiler campaign in support of Trump, they argue that isn't true because many of the citizens they are winning to vote for Stein wouldn't vote for Clinton anyway or are new voters, but this argument is betrayed by their main campaign slogan which is clearly aimed, not at Trump voters or Johnson voters, new voters, or those who don't vote. It is aimed at those that would vote for Hillary Clinton and is asking them to drop their vote into the Jill Stein bin. This is a call even the Republicans can get behind, as we shall see in our next post.

If this election remains as close as it is, Donald Trump can't win without Jill Stein's help. The Greens are saying they don't see any real difference between the two candidates when the main differences are on the white nationalist question, and every person of color knows this deeply. Therefore this can be no program for building a multi-national party in the United States. Its a program for keeping the Green Party white, small and ineffective. It may even give us President Trump as a consequence. That's why our new, let us say "request," that is a much more pleasant word, is this:

My other recent posts relating to this unique election cycle:
Does Donald Trump's secret plan to defeat ISIS involve using nukes?
Why doesn't "What's the Triad?" trump "What is Aleppo?"
Green Party Jill Stein's campaign in context
What should the Green Party do?
Greens could give White House to Trump as poll numbers even
Why Green Party's Jill Stein should drop her presidential bid
Amy Goodman should address this extremely important statement by her guest
How Jill Stein Tweets for Trump
HuffPost item shows how @JillStein campaign whitewashes @realDonaldTrump
Trump tells his '2nd Amendment people election will be stolen to prepare for insurrection
Trump didn't threaten Hillary, he threatened violent insurrection
Meet Green Party's Jill Stein, Putin sock-puppet & Assad apologist


Click here for a list of my other blogs on Syria
Posted by Linux Beach at 7:27 PM