Is US Green Party's Jill Stein a holocaust denier?

If you have no sympathy for human pain
The name of human you cannot retain
- 13th century Iranian poet, Sa’di Shirazi.

For several years now I have been saying that the Syrian conflict was turning into the first holocaust of the 21st century. Sunday, that conclusion was echoed by Martha Raddatz at the second presidential debate went she asked: 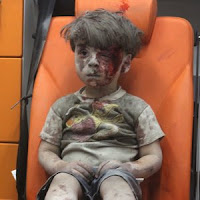 MARTHA RADDATZ: Mr. Trump, we’re going to move on. The heartbreaking video of a five-year-old Syrian boy named Omran sitting in an ambulance after being pulled from the rubble after an airstrike in Aleppo focused the world’s attention on the horrors of the war in Syria, with 136 million views on Facebook alone. But there are much worse images coming out of Aleppo every day now, where in the past few weeks alone 400 have been killed, at least 100 of them children. Just days ago, the State Department called for a war crimes investigation of the Syrian regime of Bashar al-Assad and its ally, Russia, for their bombardment of Aleppo. So this next question comes from social media, through Facebook. Diane from Pennsylvania asks: "If you were president, what would you do about Syria and the humanitarian crisis in Aleppo? Isn’t it a lot like the Holocaust, when the U.S. waited too long before we helped?"

Monday morning Democracy Now hosted Green Party presidential candidate Jill Stein for an extended show call Expanding the Debate in which Stein was given a chance to answer the same questions as those that were posed to the two contenders. In responding to the question above, Jill Stein did not even acknowledge the humanitarian crisis. Since it can't be said that she answered the question, it is good that Amy Goodman just asked her for comments:


AMY GOODMAN: Jill Stein, your final comment, presidential nominee of the Green Party, on this issue of Syria?

DR. JILL STEIN: So, Syria is a disaster, and it’s a very complicated disaster. It is a civil war. It is a proxy war among many nations. It is a pipeline war also between Russia and the Gulf states, who are competing to run their pipelines with fracked gas into Europe across Syria. So, this is a very complicated situation, and there is a hornets’ nest, a real circular firing squad of alliances here that’s, you know, extremely, extremely complicated.

Notice that ordinary Syrians are not mentioned. They exist neither as fighters against the Assad regime nor its victims. The phrase "civil war" hardly covers it, and it is not a "pipeline war", in spite of the attention she gives it. This is an Assad regime description she is parroting, and she is not providing leadership by telling us its "a very complicated disaster." We already know that! This conflict was growing the last time she ran for president four years ago, so there has been plenty of time for her to learn about the situation, particularly the humanitarian war crimes, and at least mention Syria in the Green Party platform.


To present a no-fly zone here as a solution is extremely dangerous.

This would seem to be an odd thing to say because, generally speaking, a no-fly zone is only proposed when civilians are being attacked from the air. The point of a no-fly zone is to protect people from danger, but Stein says creating a no-fly zone could be extremely dangerous. Dangerous to who? Is Stein saying a no-fly zone would be extremely dangerous for the people under the Syrian and Russian killing machines today?
Raising the spectra of "holocaust denier" was my hook. More important than the question of whether the half-million and growing death toll of the Syrian tragedy has risen to holocaust levels yet is whether the main Left candidate for president is in denial about the mass murder of civilians by Russian and government forces in Syria. Her, shall we say, "response" to the question "what would you do about Syria and the humanitarian crisis in Aleppo," contains not the slightest recognition that there even is a humanitarian crisis. She skips over the reason a no-fly zone is needed to arguments against one:


A no-fly zone means we are going to war with Russia, because it means we will be shooting down planes in the sky in order to create this no-fly zone, which is where Russia has a commitment to defending the Assad government.

Odd that she claims to run a moral campaign that asks voters to put principle above the practical, but then, while avoiding the need to come to people's aid, she promotes fear of what the killers might do to us if we interfere as the main reason to do nothing. There were those who opposed doing anything to stop the Nazis from killing Jews for the same reason.

This is what happened according to Vladimir Putin, Bashar al-Assad and Jill Stein. Others report that there never was a real ceasefire because Russia reserved the right to bomb terrorists and Russia only bombs terrorists, so while less bombing took place during the "ceasefire," it never really stopped. Aid and food was suppose to be allowed into besieged Aleppo during the seven day "ceasefire," but the Syrian government never allowed it, and the Russians bombed the aid convoy. The US has never targeted Assad's forces and everyone knows the US bombing of Syrian troops 18 Sept. was an accident, although Assad supporters find it useful, for propaganda purposes, to imply otherwise. In anycase, how this can be used to justify the resumption of the slaughter of women and children days later by Russian planes is something awaiting further explanation from Jill Stein:


We need to redouble our efforts here. And we need to acknowledge that war with Russia is not an option. There are 2,000 nuclear weapons on hair-trigger alert. And who was it that dropped out of the nuclear arms control? That was George Bush. That was our part, the U.S., in allowing the nuclear arms race to re-engage. Mikhail Gorbachev, the former premier of the Soviet Union, said last week—

Is she saying that Russia should be able to do whatever it wants in the world, invade and bomb whoever, and never be forcefully opposed because they've got nukes? This is a stand based on fear, not principle or any responsibility to protect human life. If the nuclear arms race re-engages, that will be the fault of the US according to Stein, but who is responsible for Russia's growing military aggression in Ukraine and Syria?

DR. JILL STEIN: —that we are now at a more dangerous period regarding nuclear war than we have ever been. So, it’s really important for the warmongers in the Democratic and Republican parties to be cooling their jets now and for us to be moving forward towards a weapons embargo and a freeze on the funding of those countries that are continuing to fund terrorist enterprises.

And that's what the Green Party candidate for president thinks of what is clearly the worst humanitarian crisis of the 21st century -- not much! This is because she is on the side of Bashar al-Assad. She has even said the US should help "to restore all of Syria to control by the government." From this we can assume that she supports the government's current campaign to crush any opposition in Aleppo and that is the reason for her silence about the humanitarian crisis this is causing. Her stand on Syria raises a couple of questions:

1) Why should people vote for such a person?

2) Is this the best example of leadership the Left can present?

@DrJillStein has dropped from 4% to 2%, meaning not only did she start at the bottom, she has lost support at a greater rate than any other candidate. That's no way to build a party. The Left should be able to do better than that. For more on her foreign policy see: Meet Green Party's Jill Stein, Putin sock-puppet & Assad apologist


Syria is the 1st holocaust of the 21st Century!


Click here for a list of my other blogs on Syria
Posted by Linux Beach at 8:04 PM