Why would Assad use CW with UN Inspectors in Syria?

Tweet
This seems to be a core argument of those who don't think the Assad Regime responsible for the chemical weapons attack which took place in Ghouta, Damascus, Syria on 21 August 2013. The thinking goes: Assad would be shooting himself in the foot to pull off a chemical attack just days after the UN chemical weapons team hit town. Syrian Information Minister Omran al-Zoubi even raised the UN inspection timing defense in his initial statement after the attack:


Al-Zoubi noted and that this campaign is timed to coincide with the beginning of the work of the chemical weapons investigation committee which came to Syria upon the invitation of the Syrian government and by an agreement between the UN and Foreign and Expatriates Ministry.


"The fact that the criminal action near Damascus was carried out just when the mission of UN experts to investigate the statements on possible chemical weapons use there has successfully begun its work in Syria points to this."

Since then, it has become the common refrain of Assad Regime apologists, "He couldn't possibly be so stupid as to do it with the UN chemical weapons experts less than ten miles away!" According to B.J. Sabri in Counterpunch, this coincidence of timing alone should be enough to exonerate the Syrian government and send us looking in other directions:


Was it in the best interest of the Syrian regime, which was fighting with teeth and nails to fend off a long-standing arbitrary accusation that it used chemical weapons in the ongoing civil war, to launch a chemical attack in the same day weapon inspectors scheduled to arrive? Since the answer is no. Then, who framed Syria?

How much difference did UN inspectors in Damascus make?
They argue that there are so many negatives associated with the close proximity of the UN inspectors that the Assad Regime wouldn't dare carry out an attack at that time. At first glance this may seem to make a strong circumstantial case for Assad. Unfortunately, someone did use a great deal of sarin gas just miles from the UN inspectors so we are now in a position to see how much of an impediment they actually would have been to an attack carried out by the Assad Regime.

The UN chemical weapons investigation team has been trying to get into Syria for some time now. In July, the team flew from Paris to Beirut expecting to enter Syria. The team was unable to carry out its mission and aborted because the Syrian government said they they would only be allowed to investigate one of thirteen suspected attack sites and they found that unacceptable.

On 9 August al Arabiya reported they were expected to leave for Syria in two days but were still awaiting a letter from the Syria government, i.e. invitation, allowing them to enter the country.

Finally, 18 August, just a few days before the chemical attack in Ghouta, they were checking into their hotel in Damascus.


The U.N. team is operating under a limited mandate to verify whether chemical arms were deployed, but not to apportion blame to either side. That narrow scope of work was hammered out after months of wrangling involving Syria and other U.N. member nations.

If the purpose of a crime scene investigation is to determine who committed the crime, this one was mandated to fail. This very narrow scope has led many to call the UN investigation a joke, especially after the 21 August attack. With more than a hundred videos posted to YouTube of dead or dying Syrians with no external trauma and after the descriptions from first responders and medical personnel from so many locations, there could be little doubt that a nerve gas of some type had been used. While the UN investigation would likely be able to determine exactly the type of poison gas had been used, but not who used it, many have seen this UN investigation as being of little consequent and not worth waiting on given people are still dying. 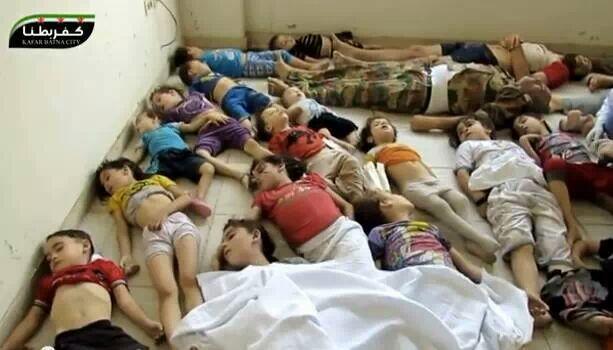 Since this UN investigation won't fix blame, those commentators who demand that any decision or action wait until its results come in, without mentioning the purposefully limited results we'd be waiting for, are simply being disingenuous.

After the attack, the UN investigators weren't allowed to go anywhere near Ghouta. They couldn't even leave their hotel without Syrian government permission and their Syrian government minders. This is the key fact that undermines the claim that Assad wouldn't do it because the UN investigator were in town. What real difference did it make? They could have been on the other side of town or the other side of the planet; it would have made no difference since it would be four days before they were allowed to access the chemical weapons attack sites in Ghouta.

First, the Syrian government had to continue its rocket and artillery bombardment of the sites of the chemical weapons attack, just as they had been bombarding those areas for months before 21 August. Now they were destroying evidence the UN investigators would need and ironically using the continuing attack as the reason to deny the UN investigators access. From the Violation Documentation Centre in Syria we have a follow up report on the chemical massacre in Ghouta:


The day following the massacre, on 22-8-2013, the fighter jets, by two air raids, shelled the Coordination office itself. The office has also been shelled by "FozdiKa" that left it heavily damaged. As for the media staff in Zamalka Coordination, they have all been martyred except for me as they went out to shoot and collect information about the chemical attack, but none of them came back."

So we can see that after the chemical attack and prior to allowing the UN access, not only was the Assad Regime destroying the evidence, it was also murdering the witnesses.

I'm going to let Wikipedia give you the short story on the UN inspectors adventures in Damascus:


Although UN inspectors hoped to head out into the field immediately upon their arrival in Damascus on 25 August, Syrian authorities prevented them from doing so.[77] On 26 August the inspectors ventured out toward but were forced to turn back after snipers opened fire on one of their vehicles. The Syrian government blamed the attack, along with a mortar strike near the inspectors' hotel earlier that morning, on "terrorists", despite the fact that a ceasefire had been declared to allow inspectors to do their work.[78] The inspectors returned to the site four hours later and spoke with 20 victims of the attacks, taking blood and hair samples as well as soil samples and potentially contaminated domestic animals. The inspectors were forced to depart after an hour and a half on orders from the Syrian government.[79] A doctor told The Guardian that inspectors were also prevented from reaching six key sites of suspected chemical weapons use. "The security force told the committee if they did not leave now, they could not guarantee their security," said Abu Akram. Akram also told The Guardian that most of the victims interviewed by the inspectors were civilians.[80]

UPI also has this to add:

Dr. Abu Akram, who operates a makeshift hospital at Mua'adamiyat al-Sham, Syria, said the arrival of 12 inspectors was delayed by gunfire for 4 hours, and their departure, ordered by the Syrian regime, came 90 minutes after their arrival.
...
The team's work was delayed after their convoy was hit by sniper fire. Though the lead vehicle was destroyed, the team, led by Swedish scientist Ake Sellstrom, was unharmed. U.S. Secretary-General Ban Ki-moon said the U.N. will register a "strong complaint" with the Syrian government and opposition authorities about an attack "so the safety ... of the investigation team will be secured."

"What I am told is that despite the very difficult circumstances, our team replaced their car and returned to the suburbs of Damascus to carry out their investigation," he said.
...
CNN reported there was an explosion near the site the inspectors planned to visit. Some witnesses said it was caused by incoming ordnance. More...

As you can see, not only did this UN inspection team have an extremely limited mandate, they also had no real control over their own investigation. The Assad Regime was able to play them like puppets on a string. They led them to the crime scene only after they had time to destroy the evidence and murder the witnesses. Why should the Assad regime be concerned that UN inspectors were nearby when they could be so easily controlled?

By 28 August, the UN team had already determined that a chemical attack had taken place, with no finding of fault in its future, all else would be details. This was announced by UN special envoy to Syria Lakhdar Brahimi. Brahimi said his information did not come from Western intelligence sources:


"With what has happened on the 21st of August last week, it does seem that some kind of substance was used that killed a lot of people: hundreds, definitely more than a hundred, some people say 300, some people say 600, maybe 1,000, maybe more than 1,000 people,"

"The United Nations has inspectors on the spot. They have already spent one day in one area where this substance – whatever it is – has been used," he said. "They have come back with a lot of samplings, they talked also to doctors, they talked to witnesses."

Has anybody even seriously suggested another scenario to explain the sudden death, without apparent external wounds, of so many people in multiple clusters overnight? If not chemical weapons, what are the alternate theories? 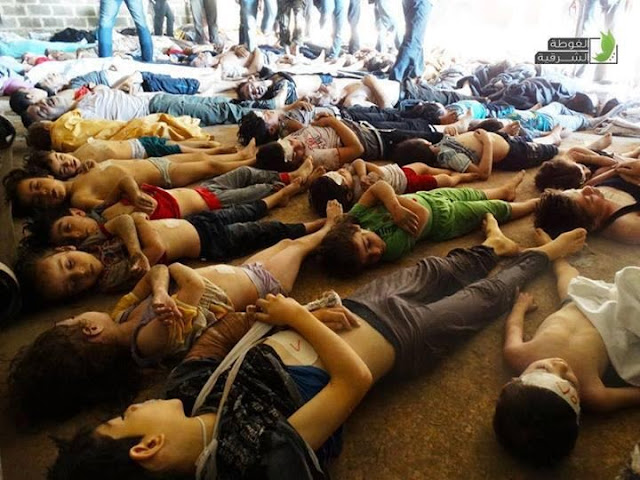 No "Who Dunnit?" from UN
That still leaves a great deal to be determined and without the slightest doubt, the most important question to be answered is, well, "who dunnit?" Assad knew he had already negotiated a criminal investigation that would fail to name the criminal party. He also knew they couldn't move an inch in Syria without his authorization. The fix was in!

This is the reality of the much touted UN CW investigation, and knowing this, it's easy to see that those insisting that the mere presence of this team in Damascus is strong exculpatory evidence of Assad's innocence, without noting how really feeble the investigation is, are not telling the whole truth.

The same goes for those that say we should wait for the results of the UN investigation without also noting the limitation of that investigation or the way the Assad regime has destroyed evidence and murdered witnesses before allowing UN inspectors a few minutes at the scene. Mark Seibel, chief of correspondents for McClatchy Newspapers, did that on Democracy Now:


And one of the bigger issues for me was the immediacy with which the administration denounced a U.N. investigation into the probe. I mean, even before the investigation had begun, the secretary of state was on TV telling the American people that there had been a five-day delay, which he later changed to four—there had been a five-day delay, and that was been too long to get any credible evidence. And that was just simply not a true statement. And why they work so hard to discredit the United Nations’ investigation, even before it had gotten started, you know, is an open question.

Another open question is why Mark Seibel didn't tell the Democracy Now audience that the Assad Regime was still bombarding the area during that five day delay and that might have something to do with the likelihood of finding creditable evidence. Why does he leave out certain important details?

Click here for a list of my other blogs on Syria
Posted by Linux Beach at 1:10 PM