Tweet
Democracy Now has done some very good exposure pieces on Donald Trump this week, after he was elected President of the United States. Before the election, not so much, as we will see. Before the election DN host Amy Goodman focused her fire first and foremost on Hillary Clinton. She also was a big supporter of the Green Party's Jill Stein and had her on the show many times, including for its election night coverage, but not since. They claimed the differences between Clinton and Trump weren't significant. They strongly oppose voting for the lesser of two evils. They claimed Trump didn't stand a snowball's chance in hell of being elected. All of these mistaken views were a positive support to Trump and helped him get elected.

To make trends easier to spot, I have put a red background behind tweets that I think are essentially pro-Trump or anti-Clinton and a blue background behind those I think pro-Clinton and thus anti-Trump. I assume a binary choice, which is why Green Party, Wikileaks related, etc tweets are backed with either red or blue according to which of the two contenders it would seem to benefit. Your opinion may differ, of course, so the tweets are provided along with my commentary.

There wasn't a lot before July, when the election coverage really heated up. Before the DNC, DN showed a lot of support for Sanders, but unlike Sanders, when it came down to a binary choice between Clinton and Trump, they did not support Clinton.


Targeting Trump's campaign racism was important, it's what won him the White House.


Given the progressive demographic of DN's audience, arguments against voting at all could only help Trump. The status quo is gone. That's for sure. Now Trump threatens our lives. Have we jumped out of the frying pan and into the fire?


Sadly, in a binary election, voting for Jill Stein was the next best thing to voting for Trump.


Thanks to campaigns like this, enough did to hand the White House to unapologetic white supremacists, which Hillary Clinton, for all her flaws, is not.


If Hillary Clinton had no control over what this supporter said, this was a cheap shot.


Funny how Trump used the Russian hacked, Wikileaks emails in the same spirit a day earlier:


If Bernie Sanders, after seeing the just released e-mails, continues to look exhausted and done, then his legacy will never be the same.
— Donald J. Trump (@realDonaldTrump) July 25, 2016

Well, maybe not so funny now.


Now this is funny. DN really didn't have much that could be called anti-Trump in July. This probably shouldn't be blue either.

This one is a classic: Amy Goodman hosts Julian Assange's defense of Jill Stein. All three are Putin friendly #NeverHillary activists. This means a Trump win, the only real world alternative, is what they have been working for. I congratulate them on their success.


This amplified the message of the Trump campaign began the month with:


When will we see stories from CNN on Clinton Foundation corruption and Hillary's pay-for-play at State Department?
— Donald J. Trump (@realDonaldTrump) August 1, 2016

Trump's threats of extra-legal and para-military action deserve a lot more coverage than they got.


Again, its really hard to call this one pro-Clinton because it amplifies Trump's claim and then validates it to some degree.


Again we find Democracy Now and the Trump campaign are on the same page:


Hillary Clinton strongly stated that there was "absolutely no connection" between her private work and that of The State Department. LIE!
— Donald J. Trump (@realDonaldTrump) August 23, 2016

All through the campaign, Amy Goodman was able to filter and tweet out Trump's messages to a progressive audience that wasn't following him on Twitter.


This isn't really anti-Trump either. Its just a stock news item. He does look more presidential when you don't see his face, doesn't he?


Yes, and let others elect the greater of the two evils. Putin didn't have any problem with that. Stein & Baraka will still be welcome in Moscow.


Breitbart Editor in Chief Steve Bannon is one of the principal leaders of the white nationalist Alt-Right movement. Calling him a "Conservative Media Influencer" to a progressive audience is to do him a kindness.

The younger generation has a short memory, but that should not be taken advantage of. Instead they should be taught history.


Not the worst thing that could be said about Trump. but it is anti-Trump.


If Wikileaks hadn't been trickling out the stole Clinton emails all season long, one can only wonder what Donald Trump, Jill Stein and Democracy Now would have done. It played a key role for the #NeverHillary activists.


It was good of them to give more coverage to Steve Bannon. The talk now is that he may be the next White House chief of staff.

The Clinton Foundation does a lot of good work, for example CNN reported:


In more than 70 countries, according to the foundation, it helps 11.5 million people, including 800,000 children, with HIV/AIDS get their medication at 90% lower cost -- more than half the adults and three-quarters of the children getting treatment in the world today.

It also takes one of the lowest "administrative cuts" of any major charity but because it accepts foreign donations, it has made for an easy target, but if they succeed in killing the Clinton Foundation without replacing it, they will be killing a lot of children at the same time.

For one week in August, DN shined a light on the white nationalists foundation of the Trump campaign, after that, they pretty much let it go dark, and it was back to focusing on the Clinton Foundation.


This is not a duplicate. DN tweeted it out two days in a row.


Actually, since Jill Stein, Julian Assange, and Mike Flynn, Trump's top general, all partied with Putin in Moscow last October, you can't blame the linkage entirely on the Clinton Camp.

That's the back of Jill Stein's head on the right. Julian Assange made a video appearance: 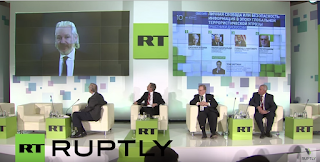 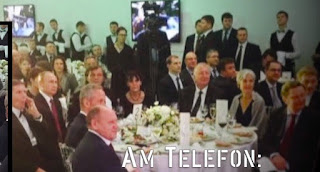 As you can see they did a little light exposure of Trump in the first half of September.

Funny he should be on DN and calling people trying to marshal every vote to stop Trump "bigots," given how little use that word got in describing the Trump campaign on DN.

Funny she should say that given her claim that Trump is no more evil than Clinton, when black people are being beaten up at his rallies and he is promising a national stop and frisk program. I would have said that defeating Trump is extremely important to ensuring that police do not have impunity to wreak havoc in communities of color, but that's not how Jill and Amy saw it. Now we are likely to get Rudy Giuliani, the father of "stop and frisk" as our new Attorney General.

Now is crunch time for the election and DN reminds us that Donald Trump's been a racist for a long time.


But the Clintons have forced black people to face famine.

They are hammering home their view that it really doesn't matter which one is the next president. That's why Amy & Jill want them judged on the basis of corruption, because there is no debate over which one is more racist. I guess that shouldn't matter. Is that why they generally stayed away from that question and used Ralph Nader to create confusion about what bigotry really is?


All the media covered this strongly anti-Trump story, and DN covered it just like everyone else.


This really isn't an indictment of Trump either but I'll paint it blue and give DN the benefit of the doubt here again.


Now Trump will remove all barriers to taking carbon out of the ground and putting it in the air. It seems that this evil doesn't even believe global warming exists, but never mind that. Clinton refused to pledge to stop any new pipelines or fracking, so screw her, even if it screws us.

This one is both explicitly pro-Trump and anti-Clinton at the same time. It invokes Trump to support the anti-Clinton claim about Haiti DN made in its 9 October tweet above.


We generally look to DN to tell us stuff we aren't already hearing on CNN and Fox News but when it comes to Trump they aren't breaking any new ground.

Stein and Putin agree: Hillary Clinton is the warmonger, Donald Trump is the anti-war candidate that promised to rebuild the US military and wonders why we can't use nukes. Now we will see.


Even if it would cost her votes and throw the election to Trump!


Did it even occur to them to occupy Donald Trump's campaign headquarters and make the same demand? He is the one with the power now and I don't see him re-routing any pipelines.


Like most claims coming from the hacked emails, this sounds much more sinister than it is.  With 55,000 private communications to chose from, it was easy to find phrases that that could be used against Clinton.


DN wasn't exactly breaking news here but it does represent an anti-Trump utterance, at least when said to a progressive audience.


This was the day after FBI Director James Comey made his bombshell announcement that they had found a new batch of emails on Anthony Weiner's laptop and they had no idea what was in them but they may be relevant to the Hillary Clinton private email server investigation. At the time Trump was way behind in the polls and this was just the break he needed. He took it and he demagogued it.

The link in the tweet above leads to the DN headline "FBI Reopens Investigation into Hillary Clinton Emails, Shaking Up Election." This was also Trump's take on it. Nine days later, Comey would say "never mind," but in the run up to election day Trump could get away with calling it "the biggest scandal since Watergate." On the same day as the DN tweet, Trump said at a 31 Oct campaign stop in Michigan:


"As you know, the FBI has reopened its investigation into Hillary Clinton and discovered — you heard this yesterday, it’s hard to believe — and discovered another 650,000 emails. Hillary lied under oath when she said she turned over all of her work-related emails – just one more lie out of so many."

But that was not true. The FBI never "reopened" the Clinton email investigation. That was the Trump spin on the initial announcement, but it was a gross exaggeration, and soon any respectable journalists who fell for it were dialing back their rhetoric. For example:

Even Fox had the good graces to surround the word "Reopened" with quote marks in its headline the day before, but not DN, by the end of October it was a stowaway on the Trump Train. Wikileaks also chimed in:

As much as 40% of the voter may have already cast their ballots by the time Comey there was nothing to see here. In the meantime the pro-Trump forces had a field day.

Finally, on the election's eve, we get a spat of critical Trump pieces that target his fascist and white supremacist  connects, as well as the extreme danger he represents, and the FBI investigation "reopened" has turned into a "probe" in which she has been cleared. All too late to make any difference, of course.

Your specifically anti-Clinton use of the most widely distributed and best known progressive radio and TV show helped Trump win. Now you will have many more years to be critical of now Commander in Chief Donald Trump, provided he allows it.

My other recent posts relating to this unique election cycle:


Syria is the Paris Commune of the 21st Century!
Click here for a list of my other blogs on Syria
Posted by Linux Beach at 12:14 PM