“Whoever expects a “pure” social revolution will never live to see it. Such a person pays lip-service to revolution without understanding what revolution is.”
-- Vladimir Lenin on Self-Determination, 1916


Noam Chomsky was recently interviewed by Maha Zaraket of al akhbar english. He is saying here what I have been saving for a long time now, namely that the US, NATO and Israel are not on the side of Assad's opposition in Syria and in fact, favor keeping Assad, but since now it is Noam Chomsky saying it, maybe more people will listen:


MZ: Would you link Obama’s decision to arm the Syrian revolution with Israel?

NC: These are separate. First of all, Israel was not opposed to Assad. He has been more or less the kind of dictator they wanted. He has done the kind of things they wanted. The US has no opposition to Assad. He was cooperating on intelligence and they did not like everything, but he was pretty satisfactory.

In fact, if Israel and the US really did want to undermine the Assad regime and to support the rebels, they have very straightforward ways to do it without arms. Israel could considerably mobilize forces in the Golan Heights. If they mobilize forces in the north, the Syrians are compelled to respond by mobilizing forces. But they do not do it, which can only mean they do not want the regime to fall.

The view that Israel is supporting the rebellion one that is heavily promoted by the Assad regime and its supporters on the Left but it has been clear to most objective observers of this conflict for a long time now that Israel considers Assad a keeper and Obama will support Israel's policies in the region. 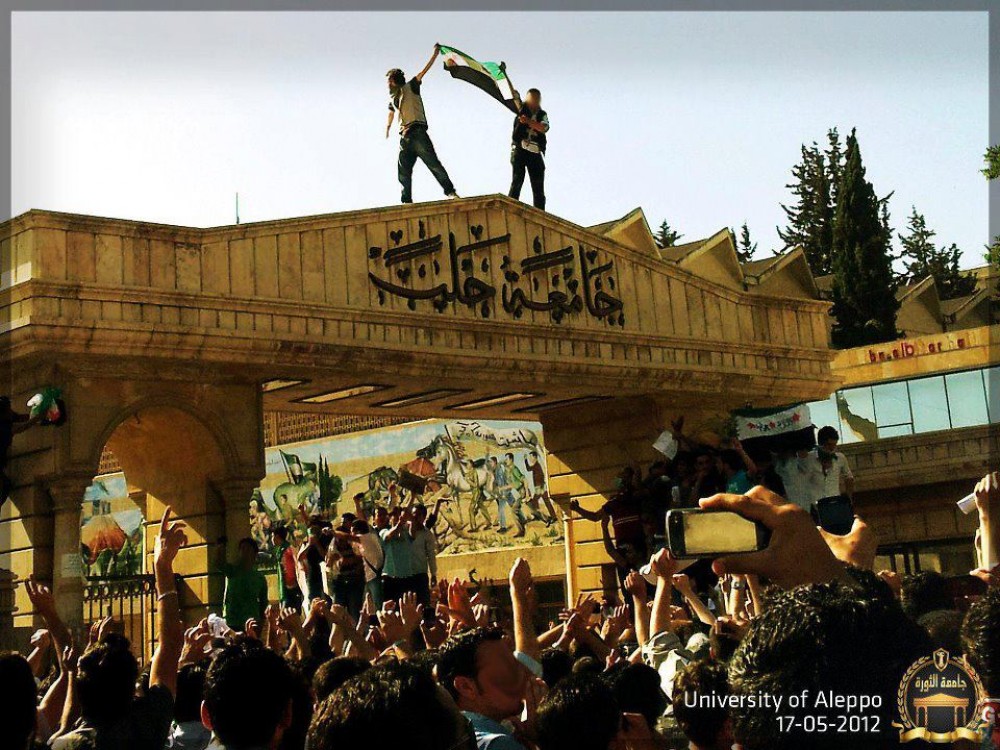 Another Marxist who supports the Revolution is John Passant, and he just posted this from Syria freedom forever to his blog today:


Syria or elsewhere, there are no pure revolutions, just revolutions…

More than two years after the beginning of the revolutionary processes, western medias have not ceased to repeat the same credo: after the dream, the nightmare for the populations of the Middle East and North Africa ; after the « Arab Spring », the Islamist Winter », (both terms that we refuse). Where are gone the « beautiful » and « pure » revolutions from the beginning, as we don’t stop repeating?

The situation is presented as catastrophic: Tunisia and Egypt are governed by Islamists, while the Syrian revolution would have become a civil war between Islamists and the Assad bloody regime. The propagation of such a discourse, underpinned of defeatism, advocates the withdrawal of activists fighting for democracy and social justice.

After being celebrated for their courage and determination in the struggle against their dictators, the people of the region are now described – in an elitist and misleading way – as unable or not ready for radical change. The thesis of “Arab-Muslim” exceptionalism, which supports that these areas are inherently unable to reach a democratic ideal, has returned very fast.

According to various situations, proposals have emerged to limit the revolutionary processes. In Syria, many attempts have been submitted to reach these objectives.

Geneva II or a new attempt to curve the revolutionary process

Firstly the Yemeni solution has been put numerous times on the table. The Geneva Conference II, which should normally take place next July, is one more attempt by all international imperialist forces, the United States and Europe on the one hand and Russia and China on the other, to maintain the structure of Syrian regime and include sectors of the Syrian opposition (National Council and the Syrian National Council in the lead) that are not representative of the Syrian revolutionary popular movement.

Geneva II is a repetition of the conference held in Geneva in June 2012 and all the other so called peace plan suggested by the UN including the the so called “peace plan for Syria” suggested by UN Peace envoy Lakhdar Ibrahimi. This plan calls for the formation of a transitional government, which holds the total responsibility of executive power to govern Syria until Presidential and legislative elections in 2014 under the auspices of the UN. During this period, the dictator Bashar al Assad would stay in function at the top of the State.

Yes, the blood of the Syrian people has sunk too much and yes the Syrian people want peace, but not a peace at any price and certainly not one decided by foreign powers in accordance with the Assad criminal regime and his loyal Iranian and Russian support and a section of the opportunist Syrian opposition, to the detriment of the interests of the Syrian people in their struggle for freedom and dignity!

Many demonstrations and protests in Syria have been held against the future Geneva 2 conference, and any agreement to maintain the structure of the regime. One of the slogans in the demonstrations of Friday, May 31 in Syria was “Geneva 2, there is a difference between fighting for freedom and who wants to improve the conditions of servitude (eternity)“, a direct message to those who want negotiations with the regime.

The people refuse outside maneouvres that would maintain the structure of the regime on other occasions as well: large demonstrations and numerous declarations reject the proposal of dialogue with the regime by the president at the time of the Syrian National Coalition, Moaz Khatib. During the demonstrations on February 8, placards proclaimed “we will only negotiate about the departure of the regime”.

This is why we have also since the beginning of the revolution criticize the National Co-ordination Body for Democratic attempts to seek a deal with some sectors of the regime, even the vice President Farouk al Shareh, for a so called peaceful transition that just like the other solutions would maintain the structure of the regime.

Geneva 2 and other so called solutions have only one objective: to prevent the radical change from below by the Syrian revolutionary people and limit the wind of revolt that could be extended with the fall of the Assad regime, especially to neighboring countries, as we can see in Turkey today, and the Gulf states, and the opening of a new resistance front in direction of the Syrian and Palestinian territories occupied by Israel.

As a revolutionary, we cannot but say that the worst solution is the remaining of this criminal regime. More...

Click here for a list of my other blogs on Syria
Posted by Linux Beach at 12:53 PM