Is #Qusayr Assad's 1st major victory in over a year?

Tweet
The hot news out of Syria today is Assad's big victory in retaking Qusayr.

As the dictator who controls the Syrian state, Assad has had the use of MiGs, helicopters, long range artillery, armored divisions and the 300,000 person Syrian Arab Army to fight a poorly armed, rag-tag bunch of activists, defectors and non-Syrian Arabs. He has shown no concern for civilian casualties and their presence has never caused him to hold back from using his most devastating weapons. He is constantly being supplied more and better weapons by the Russians and Iranians. He has even resorted to the use of rape, poison gas and starvation as weapons of war.

And he has been steadily losing ground! This is the first time his regime has clawed back a major area from the revolution. Is it his first major victory?

Is it even his victory? He was able to retake Qusayr only because of the heavy support of thousands of fighters on the ground from the Lebanese group Hezbollah. Most close observers credit them with this victory.

While Assad has had command of all the heavy stand-off weapons, and has been able to pound liberated areas into dust with them, he has lacked dependable troops on the ground in sufficient numbers to retake and hold territory. He has the support of so few Syrians anymore that he fears the regular army troops will defect whenever they are deployed. His fears have proven to be well founded. That is why he has had to depend on foreign fighters to challenge the opposition in Qusayr.


The Battle for Qusayr
Qusayr wasn't regarded as being strategically important by the media while the Syrian revolutionaries held it for a year. Now that it is back in the government's hands, we will hear a lot about its strategic importance.

When Hezbollah began its assault on Qusayr 17 days ago, most in the media predicted it would fall in a few days. On 20 May 2013, Al-Akhbar wrote:

Both opposition and army sources on the ground in Qusayr agree that the town – taken by opposition fighters early on in the Syrian crisis – will be in the hands of the regime in a matter of days. 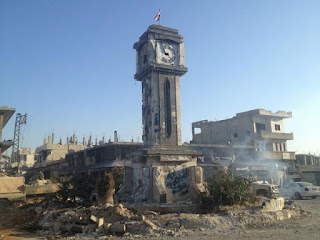 The taking of Qusayr, even two weeks behind schedule, may be a victory for the Assad forces but it wasn't a rout of the revolutionary forces. They withdrew during the night in good order, taking their wounded and the civilians with them. They withdrew through a corridor that had been intentionally left open by Hezbollah to facilitate their escape.

The deal which led to the orderly rebel withdrawal from Qusayr had been negotiated by Lebanese centrist political leaders Progressive Socialist Party leader MP Walid Jumblatt and Parliament Speaker Nabih Berri between the rebels and Hezbollah. NOW reported this story yesterday, 5 June 2013, which they said was from "a well-informed source:"

More than 200 pickup trucks carrying militants left the town and moved to a nearby village in the north of Qusayr.

Without further explanation! Like they were going for a Sunday drive!

Days before this evacuation, it had been reported that the opposition had actually managed to pierce the Assad regime encirclement of Qusayr and bring in hundreds of fresh fighters. A call went out, and freedom fighters from all over Syria started moving towards Qusayr.

However, this did not change the fact that Qusayr had become a meat grinder, surrounded by Assad's killers, for both the freedom fighters and the remaining civilians. It is apparent that they made the wise military decision to withdraw from a bad position.


he who fights and runs away, lives to fight another day
That explains why they would be willing to make a deal to give up Qusayr provided they were allowed an orderly evacuation for themselves, the wounded and the civilians, but it doesn't change the fact that it was a sign of weakness that they did so.

The next question is: Why did Assad/Nasrallah make the deal? Military "best practices" says that when you have an enemy surrounded, you either annihilate them or, if merciful, take them all prisoner. You don't let them escape!

So why did they?

I think its because they were going into their third week of embarrassment at not having been able to take this town, they were losing ground in other places, and they very badly needed a victory.

For 17 days, the best fighters they got had been unable to take this town and now the rebels had even caught a second wind, but they had been able to do to Qusayr what they have proven so adept at doing all over Syria, they were able to make Qusayr unlivable.

Since they don't have a lot of fresh rebel corpses or new rebel prisoners to brag about, its apparent that the victory they are presently proclaiming to the high heavens is the capture of an empty town that they have already reduced to ruble.


but the fat lady ain't sang yet
Take a look at these maps of the battle of Qusayr composed by Cédric Labrousse and tweeted out by Pieter Van Ostaeyen. The last map is the most recent one and while it is clear that the Assad forces hold the town center where the iconic clock tower is just about the only thing left standing, the opposition still holds the Industrial College and North Qusayr. Fighting continues and from the way the map is developing, it could be that the Assad forces will soon find themselves encircled at the center.


Overview of Battle of Qusayr - Situation on 29 May 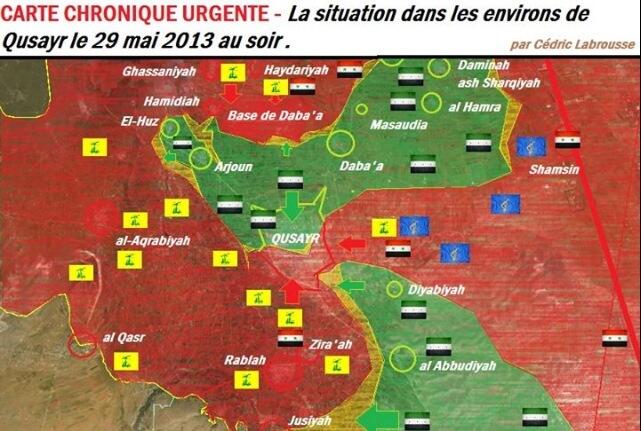 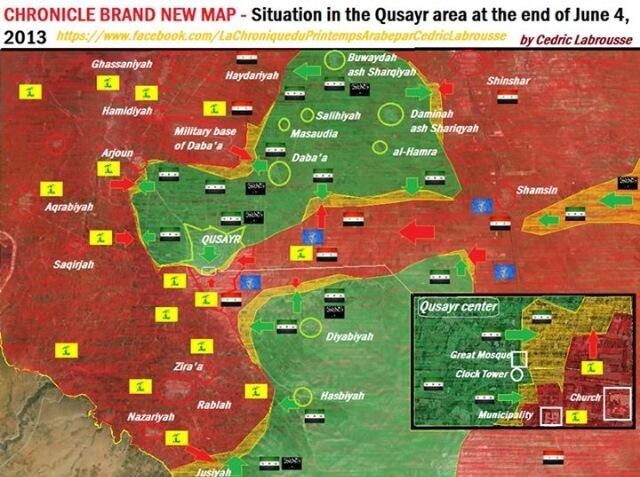 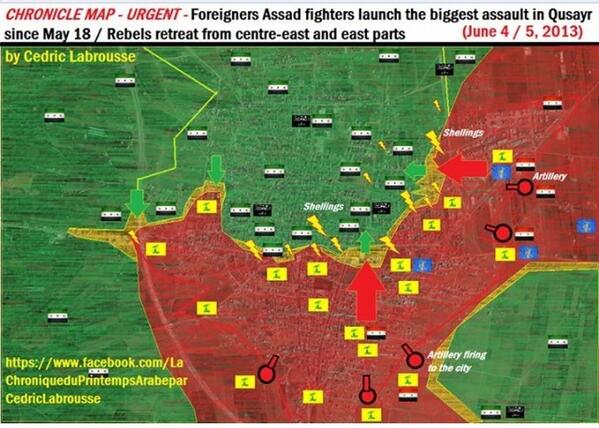 Heavy clashes in the north. Center had fallen to Assad | 5 June afternoon 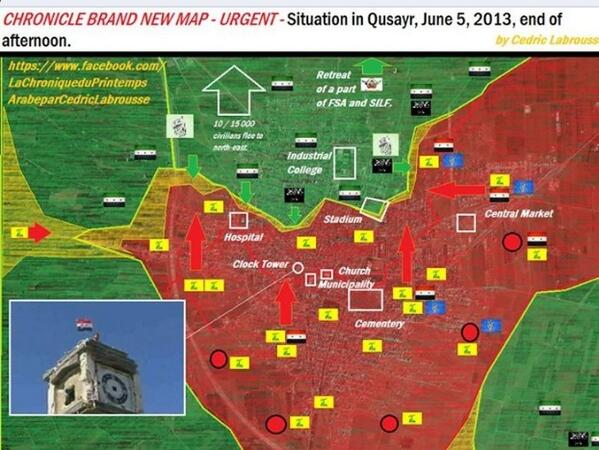 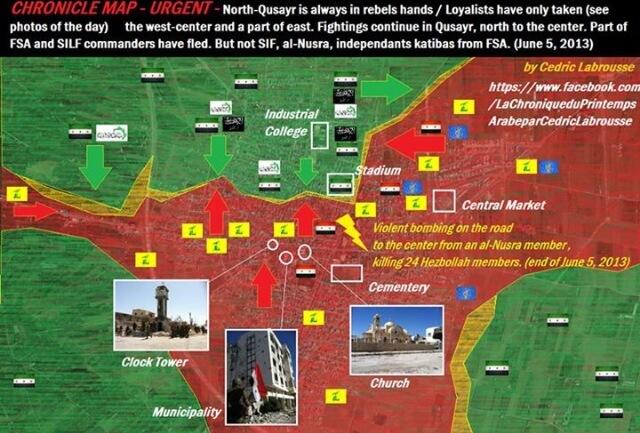 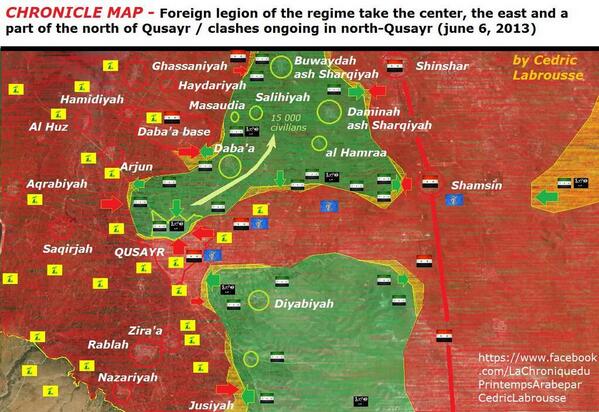 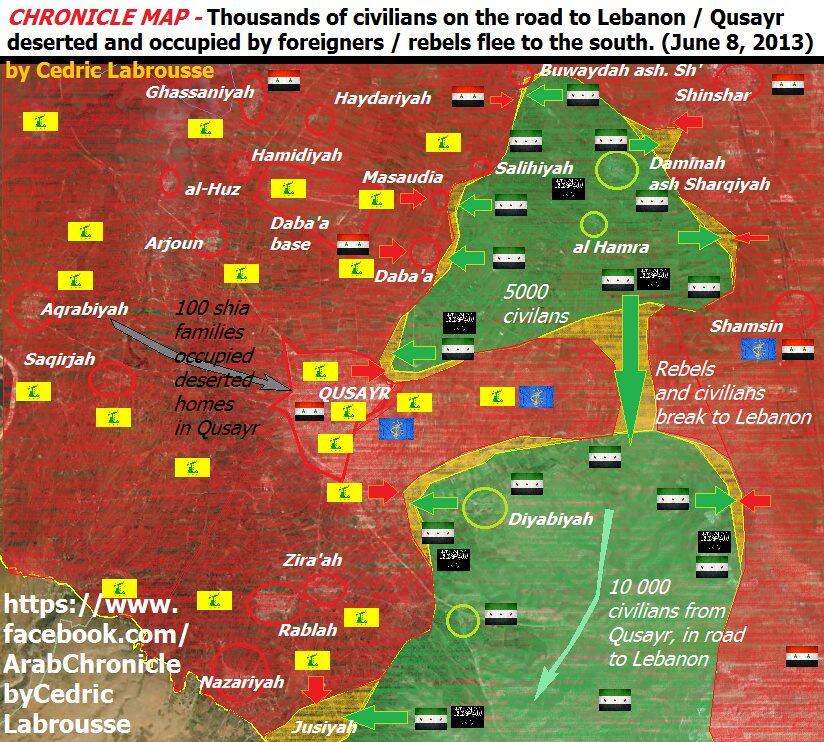 This fight is not over - watch this blog for updates!

Ahram online is reporting this morning:

Syrian soldiers on Thursday bombarded a village where rebels and civilians fled to after being routed the previous day from the strategic border town of Qusayr, a watchdog said.

"The army is using missiles to bombard Eastern Bweida," where thousands of civilians and wounded people who escaped from nearby Qusayr have sought refuge, the Syrian Observatory for Human Rights said.

"There is very little food and very few medicines and medical equipment. There is no way the village can deal with the influx."

At least 500 injured people had already fled to Eastern Bweida before the start of a devastating regime assault on Qusayr on May 19, said the Observatory, which relies on a network of activists, doctors and lawyers for its reports.

Although some fighters have stayed behind in orchards near Qusayr and Dabaa, another flashpoint nearby, most of those who fled Qusayr are now in Eastern Bweida, which is under army siege and fierce bombardment. More...

Message from Dr Mohammad about the situation in Qusayr w' English CC | 6 June 2013
Here is a good example of how the media is attempting to spin the story of the revolution turning into a proxy war. This is what Reuters had to say this morning:

What Qusair also underlines is how a conflict that began as an Arab Spring uprising against dictatorship is turning into a proxy war pitting Iran against the West and its Arab allies - a contagious contest that has spread east and west of Syria.

Oh really? Where was the West in Qusayr? Where were the Arab allies?

True enough, Assad has brought in Hezbollah from Lebanon, as well as fighters from Iran and Iraq, but the Syria revolutionaries have no proxies even while the media imagines they do.


First footage of a massacre of 110 civilians slaughtered by knifes in #Qusayr! #Homs #Syria youtube.com/watch?v=tx3G33…

The victory of #FSA in #Inkhil #Daraa worth a thousand loss in #Qusayr! Cheer up guys! It is a massive win today! #Syria

MASS EXODUS from #Qusair: From dusk to dawn they silently hurried across the #Syria fields towards to #Lebanon border youtube.com/watch?v=2NAxU9…

Click here for a list of my other blogs on Syria
Posted by Linux Beach at 12:53 AM