Tweet
I just thought it should be noted somewhere that yesterday there was a pretty big anti-war demonstration in front of the Whitehouse led by Veterans for Peace. 131 people were arrested including a number already well known to the MSM including Daniel Ellsberg and Ray McGovern, two-thirds of those arrested were veterans and I couldn't find any TV News mention of this event.

Also yesterday, the Obama administration released it's review of the war in Afghanistan, which meant that every national TV news program ran an Afghan war segment yesterday.


OLBERMANN: The president‘s report is released. We‘re right on track to achieve our goals in Vietnam—Afghanistan. Sorry, sorry. Afghanistan.


Olbermann then goes on to say "According to the “Washington Post”/ABC News poll, released today, a record 60 percent of Americans believe the war in Afghanistan is, quote, not worth fighting." Of course that doesn't mean that he will say word one about the opposition expressed by a major veterans group outside of the Whitehouse that very day or the mass arrests that resulted. Which brings me to my poll question: Is Keith in on the fix?

I saw no such coverage on ABC Evening News with Diane Sawyer and NBC Nightly News with Brian Williams last night. No mention of the VFP demonstration or the arrests, just as there was no mention of Afghan civilian casualties in their discussions of the war. Ditto with Keith Olbermann on Countdown last night or the Morning Joe podcast this morning. I didn't catch CBS last night and thanks to our glorious economy, I can no longer afford cable so no CNN or Fox News (they should pay me!).

So I'm asking other Kossacks to fill me in on the coverage I missed, because at this point I'm beginning to believe that the American MSM is involved in a criminal conspiracy of silence to cover up not only the true costs of our wars, but the very real opposition to them.

There's a YouTube video David Swanson did of the event:

My graphic from last Christmas is still good for another year: 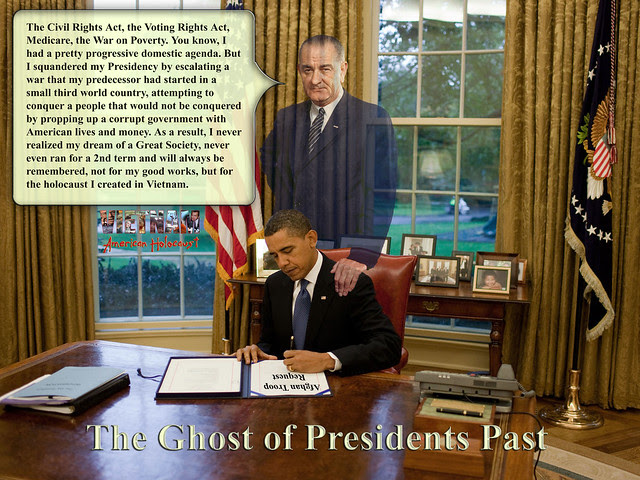