Tweet
We all knew that yesterday's One Nation Rally on the mall in Washington would be compared to Glenn Beck's Restoring Honor Rally at the same location 5 weeks ago, and while some reports put the number of people at yesterday's rally at around 200,000, or about the same range as the Beck affair, a pair of photos are making the rounds on the Internet this morning that seem to tell a very different story:


I found this pair of photographs here this morning while Googling around for an aerial view of yesterday's rally. I wanted to get an accurate idea of the crowds size. I found these. I found them very dis-heartening. They were meant to be dis-hearting.

It is claimed that both of these photos were taken at the height of the rallies and they can accurately be used compare crowd sizes. We can see that the One Nation Rally appears to be but a shadow of the Beck Rally. Very troubling.

And shadow is the key word, because the shadows tell a very different story. You don't have to be an NSA photo recon expert to figure this one out. Look at the shadows thrown by the trees on the left side of the Reflecting Pool in the One Nation aerial photo. The shadows are longer than the trees are tall, in some cases the tips reach out to the waters of the reflecting pool. This photo was taken fairly early in the morning while the Sun was still at a low angle. NSA could give us the exact time. Now look at the shadows in the Beck Rally aerial. What shadows? Clearly this photo was taken around noon.

Here are parallel blowup's from the two aerial photos to illustrate my point:

I have yet find an aerial photo that shows the One Nation Rally at it's height. I hope that they had one taken but I suspect it is both expensive and troublesome to do so, especially over our nation's capital. It is clear, however, that someone did go thorough the expense and trouble to have this early morning photo taken when they knew few people would be on the mall, which means somebody went spent a lot of time and money in advance to create this fake news story. Sure would be nice to know who did that early morning aerial photo of yesterday's rally.

I was able to grab this screenshot from the Fox News coverage: 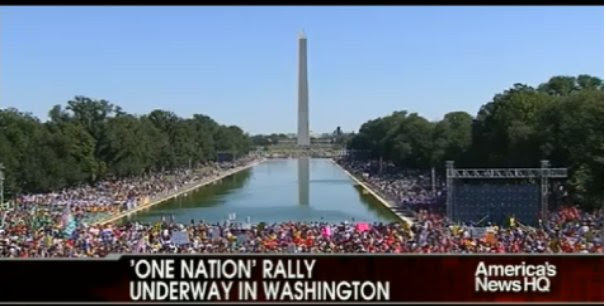