Where in the world is Ian Henderson? 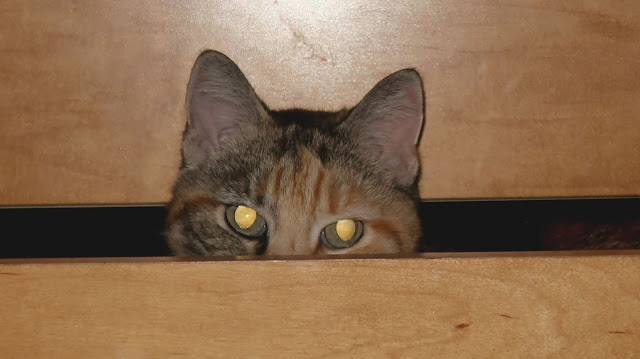 Ever since his 15-page note was “leaked” to the Internet in April, the tweeterverse has been buzzing with the name Ian Henderson. True enough, ex-journalist Robert Fisk got all dramatic with:


The then-unrevealed document titled “Unclassified – OPCW Sensitive, Do Not Circulate – Engineering Assessment of the Two Cylinders Observed at the Douma Incident – Executive Summary” and dated 27 February this year, is authored by an engineer whose name is all over the internet but which we shall not repeat here.

I don't know which internet Fisk was talking about, but his name was all over the Internet because Ian Henderson signed his name to the document. Fisk was hardly protecting a state secret. 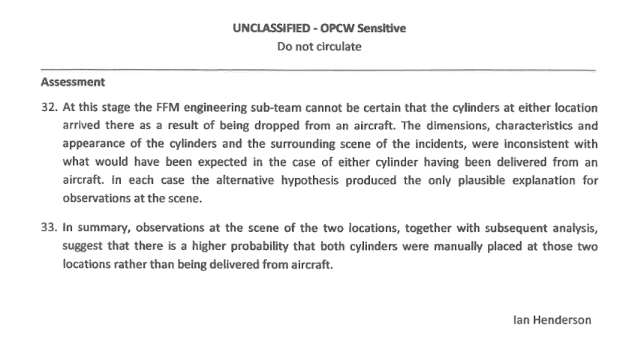 The problem many are having with this is that he just signed his name without telling us his position, or title, or organizational affiliation.  True Robert Fisk calls him an engineer, but how does he know? There's no PE following his name. I would be proud of that, and he's probably not a PhD because he's not listed as doctor anywhere.  The UK blogger Craig Murray says:


If you want to understand what is really happening in the world today, a mid-ranking official named Ian Henderson is vastly more important to you than Theresa May.

Okay, in that case we really need to know who he is. So, who is he? More to the point: Where is he, and why does he hold his tongue when his 15-page note is causing such an uproar? Cat got it?

Under these conditions, false sightings can be expected to proliferate.

Okay, this is what we know about him so far, basically four sightings that look like our man Henderson:

The “CBW Conventions Bulletin” of March 1998 names I Henderson (South Africa) as one of the first thirteen selected to be a P-5 Inspection Team Leader. This was when OPCW had a staff of 400, and Mr Serguei Batsanov of the Russian Federation was Director. 1998 was OPCW's first full year of operation, so it's clear he was there pretty much from the beginning.

A May 2002 Expert Workshop on The Conduct of Challenge Inspections Under the Chemical Weapons Convention, in Washington, DC, lists a:


Ian Henderson, OPCW Inspectorate, Organization for the Prohibition of Chemical Weapons, The Hague, The Netherlands

At this time he had recently complete a training exercise in Romania. From this paper I gather that Henderson had two areas of expertise. One was Challenge Inspections (CI), which had never been requested, although he was ready in case they ever were. In the workshop he described them:


Compared with other contingency operations the CI is somewhat specific, in that it is an inspection mandated and structured in some detail in the Convention. Provisions include using only approved equipment, and the understanding that all activities in the inspected State Party are subject to their agreement. The modalities of a CI appear to be aimed at circumstances where one State Party raises concerns about possible non-compliance in another State Party, relating to something that is militarily significant (e.g. hundreds of tonnes of chemical weapon agents or munitions).

This type of mission seems more suited to checking state stockpiles and CW production facilities to make sure they are in compliance. He also explained a new type of OPCW mission he was involved with, the RRAM:


The mission can be considered unconstrained by any Convention inspection-type requirements, seeing as a RRAM is an assistance operation in response to a request from a State Party. However the location and unknown scope of the circumstances makes it difficult to prepare for all possible scenarios. A RRAM mission is intended to provide emergency measures of assistance to a State Party that has been affected by an incident of alleged use of toxic chemicals by a non-State actor.

This appears to be more of an emergency response mission, as in “when a State Party has limited capability to respond to an attack involving toxic chemicals.” Main elements of the mission include “how to secure and isolate the affected area,” and “advice on treatment for the victims.” Although it did include “advice on how to secure the area for forensic examination and isolate forensic evidence,” it left such examination to others. More to the point:


Concluding, Mr Henderson noted that the RRAM team is not mandated to conduct an investigation,...

The program for a 19 September 2007 academic forum lists him as a panelist for “Workshop II – Chemical Weapons Nonproliferation”:


Ian Henderson “Has ten years of performing routine inspections helped prepare the OPCW Technical Secretariat for the event of a challenge inspection?”

The question mark is not my error, it's in the listing, so maybe that information is a little shaky.

A March 2018 meeting of the OPCW Scientific Advisory Board summary lists him as:

That's all we know. Until his name showed up on this 15-page note. It's clear that Ian Henderson has worked with the OPCW off and on almost since its beginning twenty years ago. It would also appear that his two areas of expertise, at least what he has been called upon to talk about, are challenge inspections, and emergency response missions. While both of those are important OPCW missions, they are very different from the forensic investigations that the Fact-Finding Missions are tasked with. While he probably is a OPCW (Challenge) Inspection Team Leader that is a very different job from a Fact-Finding Mission Team Leader.

Taking this on board with the claim by the OPCW that Henderson was not with the FFM, and the engineering sub-team was not part of the FFM, it could mean that those claims are actually true. Maybe Team Leader Henderson and his engineering sub-team aren't from Investigations, but some other area entirely. Maybe he always wanted to be in investigations, and has access to the FFM data, so he uses that to draw his own conclusions, and write them up in an note to the FFM. Because it used sloppy analysis, ridiculous methods, and was submitted, if it was submitted, a day late and a dollar short, they ignored it.

That may be the real story behind the “leaked” OPCW 15-page paper, but that is just speculation on my part. There is one man who can clear all this up and solve the mystery: Ian Henderson.

But where is he?

You can read my own critique of Henderson's work here:
Lies, damned lies, and engineering sub-team reports