Tweet
There is the very real fear that the Syrian regime of Bashar al-Assad, together with his Russian and Iranian backers, are starting their bloody effort to destroy the last opposition held area of Idlib. While the area has been dominated by Hayat Tahrir al-Sham (HTS), a jihadist group affiliated with al-Qaeda, there are also an estimated 3 million civilians in Idlib that face immediate peril. The Russian and Syrian air forces have launched massive air strikes against civilian targets, especially hospitals. One resident, Mustapha Hassan, a father-of-five, observed:


“It is methodological destruction and expulsion because we demand freedom. This is happening under the eyes of the world. The world has no sense of humanity.”

180 Syrians have been killed by Assad-Russia bombing in Idlib during past week, alongside another 150,000 who've been displaced.

After eight months of relative quiet following a Russian-Turkish ceasefire deal, Syrian regime forces and their allies have launched a fierce air and ground assault on Idlib, the last remaining province in opposition hands.

Nearly 80 civilians, including 23 children, have been killed and 12 hospitals have been targeted by Russian and Syrian regime warplanes in the last ten days, according to the White Helmets rescue group.

Around 3 million civilians are trapped in Idlib, which is dominated by Hayat Tahrir al-Sham (HTS), a jihadist group linked to al-Qaeda. Aid groups warn of mass civilian casualties and vast refugee flows if Assad’s forces launch an all-out assault.

Syrian regime troops and allied militias have so far focused their ground offensive on the southern edge of the province and this week captured the strategic town of Kafr Nabudah.

Fighters from a pro-regime unit posted a video of themselves celebrating amid the ruins of the town and warned they would push on into the rest of Idlib. “There will be no green buses this time,” one fighter said. “They will be buried under the roofs of their houses.” More...

This is what the regime is doing in southern Idlib to force out rebel forces. Try to withstand that pic.twitter.com/2KqG38PvEW

Friends, please see the urgent plea below from medics, humanitarians and White Helmets in northwest Syria. They’re calling on us to bear witness and spread word of the massacres they’re facing. Read the full letter, share it with everyone you know, and check for ways to take action here.


We are rescue workers, medics and humanitarians struggling right now to save our people from relentless Syrian regime and Russian airstrikes. In eight years, we have never witnessed such ferocious attacks on Idlib. We are devastated that the world has turned its back on us.

We fear that the full-scale military assault we have been dreading has begun. In the past 12 days alone, 122 civilians have been killed, 22 of them children. 13 hospitals and medical facilities have been bombed with patients still being treated inside. On Sunday, three hospitals were destroyed in the space of just three hours. Kafranbel Surgical Hospital alone was bombed four times with only three to five minutes between each airstrike. Injured and sick, our patients had to run for their lives, some of them with their IVs still attached.

Already, one White Helmet volunteer has died in a double-tap strike when an airplane bombed a house and then circled back to bomb the people that had gathered to help. Separately, one of the White Helmets’ main warehouses was targeted and dozens of ambulances as well excavation vehicles used to lift people out of the rubble were destroyed. We feel responsible for the communities we serve and increasingly helpless with every blow to our capacity to save lives.

Time and time again we’ve witnessed attacks by the Syrian regime and Russia on hospitals and civil defence centres ahead of major escalations. We’ve seen it in Aleppo, East Ghouta, Daraa, and elsewhere. After those offensives, residents were forcibly displaced to Idlib — this time the people of Idlib have nowhere left to flee. With the Turkish borders closed to them, people are sleeping in the open air, without shelter.

The areas we are operating in are covered by a Russian and Turkish demilitarisation agreement that is supposed to protect civilians. But civilians are not being protected, they are being hunted. The whole time we are pulling survivors from the rubble, they are screaming the names of their children or parents or siblings and asking us if they are alive. In ambulances and in hospitals, we have the terrible job of informing them that their loved ones are dead. Many end up wishing they hadn’t made it. We are physically and emotionally exhausted and worry that the worst is yet to come.

To humans everywhere, we ask you to bear witness and spread the word about what’s happening in Idlib. Share our letter and send it to your politicians and journalists you might know.

To the guarantors of the demilitarisation agreement and members of the UN Security Council, we hold you accountable for every civilian life lost and demand you uphold your responsibility to stop the bombs.

To donor governments, we ask you to immediately allocate funding to allow the organisations on the ground to respond to the humanitarian crisis.


Although she is already gone. His wife, Um Khalid, was all what he worried about. He asked the volunteers about her over and over. Air raids by Russia targeted their town in southern #Idlib, killing two children and two women, including Um Khalid, and injuring four others. #Syria pic.twitter.com/aSkqFRcxd3


Only Trump can save Syria’s Idlib, but time is running out 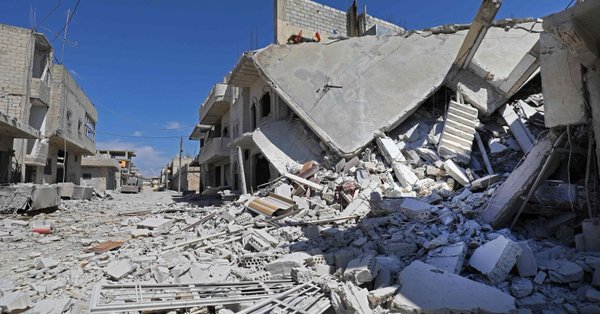 There is little that can stop the brutal assault underway in northwest Syria, where Russian, Iranian and Assad regime forces have launched a major military offensive as millions of civilians flee for their lives. But the record shows that if President Trump acts to try to halt the slaughter, it will have real impact on the ground. Even a presidential tweet could save lives. Time is of the essence.

There’s a lot going on right now in U.S. foreign policy. The Trump administration is dealing with an escalating Iran crisis, North Korea missile firings, a shaky China trade negotiation and an attempt to oust the Venezuelan regime. It’s no mere coincidence that Bashar al-Assad and Moscow chose this moment to retake the last rebel-held area of Syria using scorched-earth tactics, committing atrocities along the way.

The region of Idlib holds about 3 million civilians, including 1 million children, who were moved there from across the country because they would not submit to the Assad regime. And now there is deafening silence from the international community about their brutal slaughter. More...

1) Khayria al-Bayoush and Mohammed al-Jawhar (displaced from #Halfaya town) have been killed, and 20 civilians were injured. The attack was carried out with a high-explosive missile and cluster bombs by the regime forces on #Kafranbel town in #Idlib countryside. pic.twitter.com/Oof0B9NDTW
— The White Helmets (@SyriaCivilDef) May 10, 2019

The Telegraph is reporting:


Evil will triumph if the West fails to act in Idlib
By David Nott and Hamish De Bretton-Gordon
11 May 2019
The final battle for Idlib, one of the last pockets of Syria still holding out against Assad, seems to have begun. With the Syrian regime viewing civilians still living in the area as terrorists, three million people face either being killed or forced to flee as refugees. And the methods being used to crush the resistance are grimly familiar. In the last 10 days, 12 hospitals have been destroyed in attacks mounted by Russia and Syria – unconscionable crimes that have proved a useful tactic for Putin and Assad but which have gone largely unchallenged by the international community. More...

The only survivor..
Khadija the two years old is alone in the world now, after she lost all her family today.. learn her story.. #Syria #Idlib pic.twitter.com/2ycdzav8nh