Tweet
Thanks to Assad's brutality in the 21st century, we all know what we we would have done had we known about the great holocaust of the 20th century while it was happening.
I know, without a doubt, what I would have done. What would you have done?


This is not Civil War. This is simply Murder


President Assad’s genocidal barrel-bombing campaign on Aleppo province continued over the weekend, killing an estimated 93 people, in addition to the 200+ killed in the previous 5 days.

These Children Got a Special Delivery from Assad at Their School

The total of those injured now well exceeds 1,000. At least 28 of the latest deaths are thought to be those of children.

Over 2 days, Assad’s aircraft have dropped at least 25 barrel-bombs on 5 different districts, hitting a school, a market and a line of 10 vehicles including a bus. All those inside the bus were killed.

Hassoun Abu Faisal, an activist with the Aleppo Media Center said, “The medics say they are removing people in parts; they aren’t sure how many there are.”

The main districts affected were Hanano, Al-Ahmadiya, Sakhour, Baideen, and Ard al-Hamra, plus the countryside villages of Marea and Atarib.

In Marea children were hurt while classes were in progress, and in Aleppo city itself 2 of the victims killed were ambulance workers rushing to help the injured.


Elementary school bombed while classes were in session. 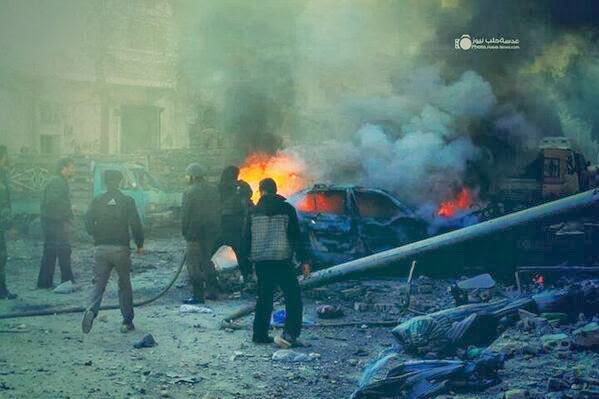 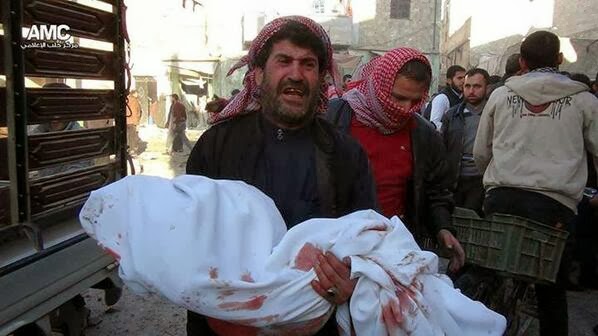 By DIAA HADID 12/23/13 08:57 AM ET EST
BEIRUT (AP) — Government forces widened a bombing campaign in rebel-held areas of northern Syria on Monday, striking one of the main border towns near Turkey and killing 15 people, said activists.

The attack on Azaz was the latest attack using powerful but inaccurate "barrel bombs" on the northern city of Aleppo and its surrounding towns and villages, said an activist who goes by the name of Abu al-Hassan Marea. He said residents in the town told him that 15 people were killed in the strike. Another activist group, the Local Coordination Committees, gave the same death toll.

The Azaz attack suggests the government is expanding its range of targets a week after it began an unusually heavy air offensive against Aleppo on Dec. 15., dropping barrel bombs on rebel-held areas from helicopters. Aleppo, Syria's largest city, is divided into government-and-rebel-ruled areas. More...

Vehicles burning after the airstrike on Hananao | 22 Dec 2013

A train in the Al-Muslimiyah neighbourhood| 22 Dec 2013

Syrian warplanes have killed more than 300 people, including 87 children, in an eight-day bombing campaign against rebel-held parts of the northern city of Aleppo, a monitor said Monday.

"From December 15 to 22, 301 people have been killed, including 87 children, 30 women and 30 rebels," said the Syrian Observatory for Human Rights, which relies on a network of activists and witnesses on the ground to track the civil war.

Opponents of Syrian President Bashar Assad accuse his forces of dropping explosives-filled barrels on rebel-held areas in an effort to demoralize their supporters and turn them against the insurgents.

A security source told Agence France Presse on Monday that the army had adopted the tactic because of a lack of ground forces, and argued the heavy civilian toll was because the rebels were in residential areas. More...

The Assad Regime is suffering from "a lack of ground forces" because so many have defected. Its just not that easy to get Syrians to kill other Syrians even though Assad does all he can to stoke sectarian hatred. So even with the foreign intervention of soldiers from Iran, Iraq, Russia and Hezbullah, he can't kill fast enough without using his airforce.

The vicious air campaign has seen regime aircraft drop barrels of TNT onto rebel-held neighborhoods.
23 Dec 2013
BEIRUT - Syrian warplanes have killed more than 300 people, including 87 children, in an eight-day bombing campaign in the second city of Aleppo a month before planned peace talks.

The vicious air campaign has seen regime aircraft drop barrels of TNT onto rebel-held neighborhoods -- a tactic widely condemned as unlawful -- flooding hospitals with victims, according to activists, medics and other witnesses.

The attacks come as President Bashar al-Assad's forces have advanced on several fronts in recent weeks while Western nations have been preoccupied with Syria's chemical disarmament and preparing for January peace talks. More...

The bottom-line is I still really need your support. I often think that if I got a nickel for every time someone watched Vietnam: American Holocaust, I would be on easy street, but even though Google runs ads against it, they won't allow me to, so after 460,000 free views on YouTube, I feel that I am being forced to withdraw it to the pay-per-view market.

More than I ever have before. I need your support to help Linux Beach continue the work of getting out the news and views that may not turn a profit but are part of a dialogue that is essential for humanity going forward. If you are in a position to make a contribution is this work, no matter how small, I urge you to do so. You may make a contribution safely via PayPal to Linux Beach here. Tax deductible contributions towards the completion of our film in progress, Vietnam: People's Victory, can be made through our fiscal sponsor, "From the Heart." Checks can be made to "Linux Beach" and sent to the address below. Even if you can only afford to buy a DVD, that would be a great help. Don't you know a school or library that still doesn't have a copy of Vietnam: American Holocaust, or anything else that tells the anti-war side of that story, on its shelves? That film, graciously narrated by Martin Sheen, which Ron Kovic called "essential viewing for all Americans" is available at Amazon, and all my titles, including the two new ones, are available at Linux Beach.