The Year in Review: They should have left that street vendor alone! 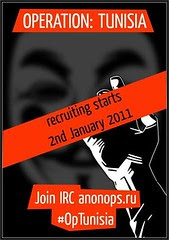 2011 actually started on December 17, 2010 although none of us knew it at the time. On that provident day a fruit peddler in Tunisia decided that he was mad as hell and not going to take it anymore. In the year since then, his sentiment has been echoed by millions around the globe in the greatest show of people power that we have seen in more than 40 years.

Mohamed Bouazizi, who could find no other work and took to selling fruits and vegetables, had grown tired of the police harassment. When his complaints to city hall went unanswered, he doused himself with gasoline and lit a fire that is blazing still.

Had his act of defiance happened in any earlier epoch, it most likely would have gained little notice outside of word of mouth, but we now live in an age when word of mouth spans the globe. We have the technology, even in North Africa.

So news of his defiance spread throughout Tunisia in a flash and the people rose up to demand justice from the government. Then, via WikiLeaks, the Tunisian people found out just how corrupt their government really was and started to demand an end to the 20 year rule of Ben Ali. When they did this, their struggle took a revolutionary turn.

The source of that revelation was an unlikely one. A group of hackers, computer nerds, that made it their business to make government and corporate secrets public, with the aid of another hacker inside the digital pentagon, released the US State Department Tunis Embassy cables that gave details supporting what everybody already suspected about the president-dictator. Then on the 2nd day of the new year, the hacker activist group Anonymous, led by its Tunisian members, organized international support for this uprising with #OpTunisia, mainly by spreading the word, keeping the people's lines of communications up while disrupting government PR efforts and gathering Intel.

By the middle of January, Ben Ali was getting out of Dodge and protests were breaking out in Libya and Algeria. By the end of January, Egypt was fully involved and the world knew that it would be an Arab Spring. The global activist network in support of these struggles was also rapidly developing. A dense network of websites, YouTube pages, facebooks pages, Twitter accounts and other Internet resources had to be managed. The technology progressed within the year too. Cell phone cameras and YouTube were the weapons of choice from Tunisia through Libya but by Occupy Wall St., smart phones and live streaming video were coming into their own. Twitter was everywhere. The lessons of the struggle spread rapidly. In Egypt, Anonymous responded with #OpEgypt and when Mubarak tried to cut the Internet, Google came up with Speech-to-Tweet.

Before February 2011 was half over, a second dictator, Egypt's Mubarak was forced to end his 30 year rule. More protests sprung up in Yemen, Bahrain, Jordan, Palestine & Syria. Things were moving very fast. #OpLibya and #OpAlgeria were actually discussed in Anonymous before #OpEgypt demanded their attention. I think most in the global activist network that grew up to support the Arab Spring thought Libya or Algeria would be next, Egypt was the big enchilada and would be much later, but things were already moving at lighting speed. I made my contribution mainly in agitprop work, writing in the DailyKos and then joining the staff of WikiLeaks Central, where my beat was Tunisia, Egypt, Algeria and Libya. Libya became my longest self-assignment and so far, the toughest dictator to crack.

In Libya, the Arab Spring finally met a dictator that had an army that would massacre its own people when ordered to, something the armies in Tunisia and Egypt had refused to do. Because of this, the Libyan people were forced to make their revolution the old fashion way, by armed struggle. They built a true people's army, the Libyan working class - armed, and with some help from above by western interests keen to get the oil flowing again, they vanquished a brutal dictator that had savaged Libya for more than 40 years. The new government estimates that the civil war cost some 30,000 Libyan lives and, according the Democracy Now and the NY Times last week, less than a hundred of those were civilians killed by NATO. The Libyans won their liberation at the greatest cost of any in the Arab Spring, but they also won the most thoroughgoing revolution of them all, the only one in which the old army and all institutions of the old regime have been abolished.

With Qaddafi leading the charge, the response of regimes in Yemen, Bahrain and Syria veered toward the use of live fire and military power on peaceful protests. Rivers of the people's blood watered the Earth in 2011 as a result, but nowhere did the people back down or let up. More than 5,000 protesters have been murdered by the monster Assad in Syria this year and still they keep coming. 70,000 protested in Homs Tuesday and 40 more were killed.

As the year progressed, the struggle exampled by the people of North Africa began to be taken up all over the world. When they went to the streets in Belgium, they spoke of Tahrir Square. In Greece and Spain, massive numbers took to the streets to protest austerity measures. In Chile, and London students went on strike. In Bolivia, they took the protest on the road. I even saw a Guy Fawkes mask in a Moscow demonstration this week.

Twitter became the communications tool of choice for activists all over the planet. Facebook played an important role too, but so did chat, piratepad and other less well known means of digital collaboration. For a while an innocuous Egyptian dating site was a place beneath the radar where a lot of revolutionary "hook-ups" took place. Google brushed up their Arabic translation capabilities a little more than a year ago as in anticipation, and again in Libya they provided that important Speech-to-Tweet service when Qaddafi tried to cut the cord.

During the long Libyan struggle this global support network of information activists began discussions and planning to bring the Arab Spring home. WikiLeaks Central initiated the US Days or Rage campaign in March. Anonymous also started making plans, AdBusters started a campaign and the Occupy Wall Street movement was born out of this network just as the Libyan struggle was being brought to a successful conclusion, Occupy Los Angeles started on October 1st, and together with hundreds of similar occupations all over the planet, Occupy Venice started soon afterwards. The Arab Spring had come home. 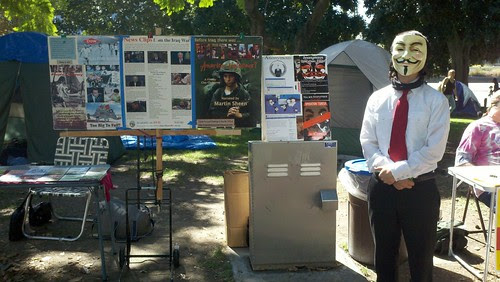 Tasks of the Coming Year


Abraham Lincoln once called the United States the "Last Best Hope of Earth." He was wrong. He was exaggerating. While ending slavery was important and even preserving the union had some progressive value, it was still too early to speak of last chances. The Earth was still a little too young then but things have change greatly in the 150 years since he made his claim and 2011 has shown us something else, it has shown us how desperate the plight of the planet now is.

From Japan we learned what a disaster nuclear power is, all across the planet thousands lost their lives and livelihood as global warming flooded some areas while drying up others. Imperialist wars expanded in Afghanistan and Pakistan. In the so-called advance countries, millions of people went unemployed and homeless while the bankers fiddled and the world economy burned. It is no longer a question of hyperbole to speak of last chances for the planet because we are all staring into the abyss.

But in 2011 we also saw this revolutionary spirit, which really is the "Last Best Hope of Earth" come clear around the globe and into our backyards. Let us all work to make 2012 a year of even greater triumph for the people's movement, 2011 was only the beginning. This planet can only be saved if world finance capital is overthrown and the home of finance capital is still the United States. We are still in the belly of the beast. Let's make 2012 the year of the American Spring.

If you are in Southern California, I hope to see you at Occupy the Rose Parade on January 1st and 2nd.