"If this bill had been law five or 10 years ago, there's a good chance that YouTube would no longer be around."


It's back! A Judiciary Committee vote on the Combating Online Infringement and Counterfeits Act this letter from 87 leading Internet Engineers outlining why this is a very bad idea. Now the midterms are over and the protests have died down, so they are trying to slip it by us in the lull.

You must act now to stop this Internet takeover! Call your Senators and sign the Demand Progress petition here.

This bill is being promote as one that is necessary to defend the Intellectual Property [IP] of American creators and one that will protect U.S. jobs. In reality it is designed to protect the profits of a handful of corporations and will cost the U.S. jobs.

Senator Patrick Leahy introduced this bill and has had it on a fast track for passage. Massive opposition put a stop to the dreams of quick passage before the mid terms. Now Leahy has been re-elected with the help of fat contributions from Time Warner, Walt Disney Co, Microsoft and Vivendi, and he has a debt to repay. It looks like it is back on the fast track and may come up for a vote as early as Thursday.

While it is promoted in the name of the artist and writer, it is designed to serve the corporations. The language of the bill is very carefully crafted to make sure corporations are considered IP rights holders. The copyright protections of this country have already been bent from the maximum 28 years set by the founding fathers to 125 years in the case of a corporation, 30 years longer than for a human being. Now that they have so stolen our public domain and locked up culture with the help of corrupt politicians on the take, they aim to use this bill to lock down the Internet. And the means that they want to use to lock down the Internet are so draconian in their intent and will be so damaging in their effect, that not only will it drive more and more Internet businesses and innovators overseas, thus costing American jobs, if carried through to full effect, is likely to precipitate a split in the Internet [then we really will be able to speak of the 'Internets'] that will cost the U.S. it's leading role in world communications and technology.

This bill doesn't really create any new forms of infringing activity, everything it covers is already illegal and the corporations and other copyright holders already have legal remedies to use against pirates and those who give them safe harbor. What this bill does is provide a lot of public resources for the likes of Nike, McDonald's, and MGM in their pursuit of profits. The law will create two blacklists of websites, one list of addresses that must be blocked, and an immunity list of websites the Justice Department would like to shutdown, a sort of 'bonus points' list. Of course the now, out-of-business website owner can appeal in court, provided they have the time and money. I have a friend who spent $50K 'winning' a fair-use copy right infringement suit. This law is first of all designed to shift the burden of copyright enforcement from the corporations to the government and the ISPs. Many times the judge's gavel is the hammer of money on the head of the poor.

But it is the method of enforcement that makes his bill particularly dangerous. It mandates that a new feature be added to the Internet in the United States that doesn't exist now, the ability to selectively filter and block Internet traffic. I should also tell you that this 'feature' will not be cheap to implement and since we know that ISPs will have the government's blessing in shifting those costs downstream, we know who, ultimately, will pay for our new controlled Internet.

Nor should anyone think that this is merely about "Infringement" as the bill advertises. Once the mechanisms of blacklist and censorship are put into place, they will be applied to a wider and wider array of "illegitimate" Internet traffic. Obviously "terrorist websites" (as defined by the DoJ) will be blocked, ditto sites that spread government or corporate secrets like WikiLeaks.

If you understand how the Internet works you will also understand that for the U.S. government to accomplish its intent in this bill and Obama's Internet spying bill, it will have to seize control of the root domain name servers from the international NGOs that currently run them. This is why I call it an Internet coupe d'etat and why the 87 Internet Engineers, among others, have warned that it could split the Internet.

The bottom line is this: As we move forward into a period of continuing economic crisis, this will promote increasing social protest and mass organization. Under these conditions, the gov't and its corporate masters realize that control of communications and the media is extremely important. When it comes to all of the traditional media, they have everything pretty well locked down. But when it comes to the Internet, that is a different story. There, not only do they not have that type of control, because the Internet in run by international NGOs, they aren't even in the drivers seat.

This COICA, together with an Internet eavesdropping bill to be put forward by the Obama administration amount to a attempted American coupe d'etat on the World Wide Web.

Here is a recap of my other DKos diaries on this subject:
Sweet Victory on Internet Censorship: Senate Backs Off!
Internet Engineers tell the Senate to Back Off!
Why is Net Neutrality advocate Free Press MIA?
Obama's Internet Coup d'état
Julian Assange on Threat to Internet Freedom
FCC Net Neutrality's Trojan Horse
Free Press: Country Codes for the Internet?
The Mountain comes to Mohammad
Keith Olbermann's Deception
Court rules -> Google Must Be Evil & Maximize Profits
EFF on the Google\Verizon Net Neutrality Proposal
Google-Verizon: What is the Free Press Agenda?
End of the Internet As We Know It!
Free Press would make this Illegal!
Google Verizon Announce Terms of Deal 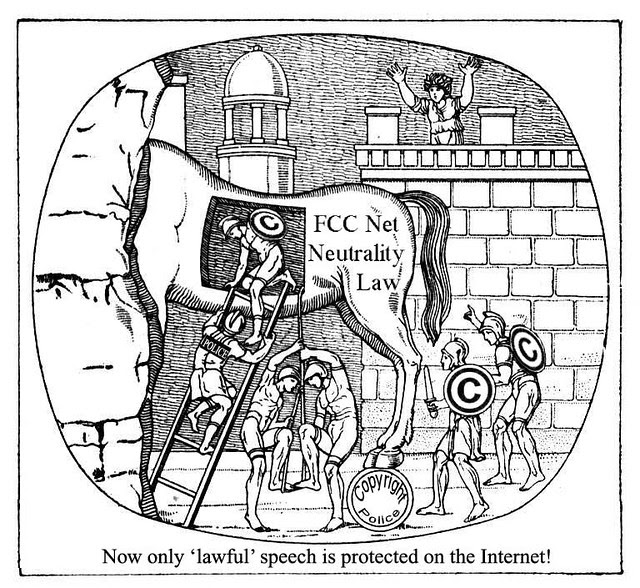