The U.S. Social Forum was a Great Success!

Tweet
The United States Social Forum took place in Detroit last week. You may not have heard anything about it because Major Media coverage was on a "need to know" basis. Because it might be hard to miss 20,000 activist with orange wristbands running 'round the city and doing things like dropping banners from buildings, they covered it in Detroit. But if you didn't already known something was going on, they didn't need to tell you. I told the organizers to send out a press release saying 200 tea partiers were having a rally at Cobo Hall. 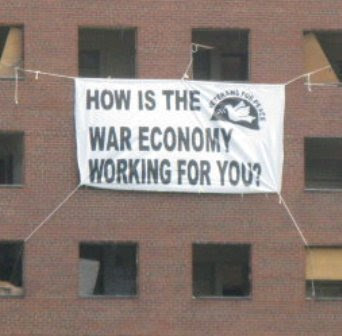 There were over a thousand workshops on every aspect of the social justice and human liberation movements. It was very significant that the USSF was held in Detroit because Detroit is truly a torn down city. This was clear to me though I never got out of the downtown area. Even inside the downtown People Mover's 3 mile perimeter, one could see what looked to be bombed out buildings, empty buildings and "for lease" signs are everywhere. I was told that the only reason many of the skyscrapers are still standing is that they can't afford to take them down. Some neighborhood have 100% unemployment. Empty tracks of land, vacant and abandoned buildings are everywhere.This in a city with a strong and well trained workforce with a long history of getting the job done. A long history of unionism and struggle and a rusting industrial might. If ever there was a monument to the failure of capitalism to continue to make good use of the very productive forces which it has created, it is Detroit.

Some of those building are being taken over by squatters and renovated and 1200 farms and community gardens have been setup in the city and they are actually making significant contributions to the people's welfare. But Detroit is only where most U.S. cities are headed. Detroit is ahead of the curve.

Considering the dire straits they find themselves in, the remaining 800 thousand residences of what use to be a city of 2 million seemed to be in very high spirits and very happy to have the USSF come to town. We had the Cobo Hall all to ourselves and it is huge, indeed much of time it seemed we had much of downtown to ourselves. Rush hours with no traffic. Strange! Already I could see that in Detroit, because of the strange circumstances, many of the usual rules were losing their grip. Traffic rules for example, are considered more advisory. One feels like one should wait for a walk sign before crossing the six lane blvd but in as much as the nearest car is still two blocks away and probably won't stop for a red light anyway, so what they hell.

On Friday night I took a cab from the biggest party I've ever been to. When I got to the hotel, 1 am, I ask the cabby 'how much?' He said 'whatever.' Weird, he didn't have the meter running. It was less than 2 miles but I gave him $10. I found myself tipping way too much, my heart goes out to these people.

This 'self-acting' attitude was also alive and well at the forum. For example, I had tried to get a table in the tabling area before I left Los Angeles and was told that I was too late and the tabling area was already filled up. When I finally got to Cobo Hall early Tuesday morning, I saw that the tabling room was this huge hall, not half filled and with a healthy supply of tables stacked on the other side of the room not 200 yards away! About this time Micheal McPhearson came up and told me that the Veterans for Peace [VFP] tent in the pavilion area wasn't working because very few people were getting over there. Iraq Veterans Against the War [IVAW] and Military Families Speak Out [MFSO] were also in this boat. Micheal and I crossed the room and brought back one table and set it in a new row at the end of the existing tables and claimed it for VFP, then we brought back 2 more for IVAW and MFSO and stacked them on end towards the empty end of the hall. We had simply taken matters into our own hands. [What do you expect? We are, after all, Activists!] There we sat, waiting for the conference organizers to either complain or collect our $25.00. They did neither and by the end of the day we were no longer sticking out on the end but in the middle of an 'urban sprawl' created by people that had followed our lead. In addition to the VFP table, were I spent most of my time, Vietnam: American Holocaust was also available at the Committee of Correspondence for Socialism and Democracy [CCDS] table and Freedom Roads Socialist Organization [FRSO] table. It was very well received by the USSF forum visitors and the people of Detroit. 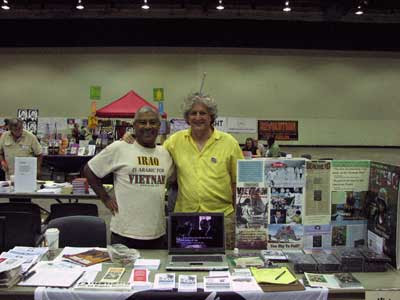 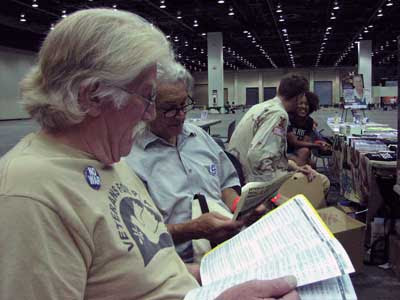 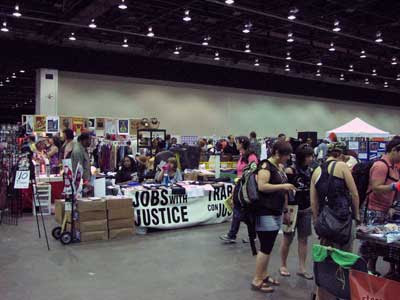 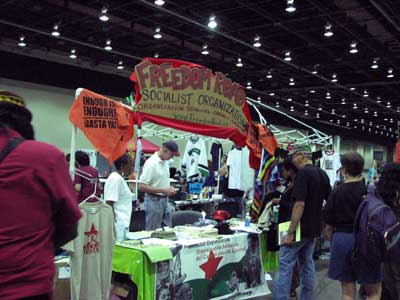