Join us in Santa Monica September 10 to defend Racial Justice

Tweet
The Santa Monica Committee for Racial Justice is inviting all those interested in supporting its mission of building racial unity and fighting white supremacy to its next regular meeting on Sunday, 10 September 2017 in the Thelma Terry Bldg in Virginia Avenue Park in Santa Monica. Linux Beach had earlier reported that the meeting would take place on 3 September. Because of the Labor Day holiday the meeting was moved back a week from the usual 1st Sunday of the month schedule. The meeting will begin at 6:30pm, preceded by a potluck at 6:00pm, but you are urged to arrive hours early prepared to spend time in the park even if the meeting room is filled to overflowing. The reason will become clear as you read on. 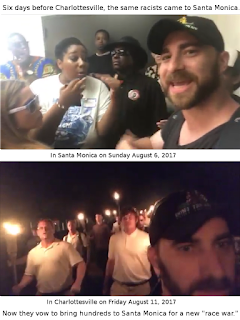 If you have been reading Linux Beach recently, or some of the local publications such as the Santa Monica Mirror, Santa Monica Daily Press, The Argonaut, Westside Today, or City Watch, that have covered this developing story, you already know about this local struggle against some of the same plainclothes Nazis and Klansmen that marched and murdered in Charlottesville. From their livestream chatter we have learned that they have decided to destroy the 6 year old Committee for Racial Justice because they see any fight against racism as "anti-white." They have declared it their new "Berkeley," but its not going to work out that way for them.

They sent a handful of hecklers hiding behind masks to the July meeting to disrupt it with racist and anti-Semitic taunts. They came back with maybe 25 white supremacists, and a handful of new recruits, to try to disrupt the August meeting, but we managed to keep them out of the meeting. They have vowed to come back and bring "hundreds" to the September meeting with the intention of "shutting it down."

A racist president has emboldened them, that is why they brought their poison to Santa Monica in the first place. They hadn't done it before in 6 years of CRJ meetings.

Some of the leaders of the August 6th attack on CRJ spoke the following weekend to the collected fascists in Charlottesville. This is our local connection to that national struggle. After Trump's embrace of their deadly rally, and his pardon of Arpaio, they are on a sugar high,...and need to be brought down.

That is where you come in. We need you to help us deliver a resounding No! to these forces of hatred and bigotry. We need the progressive community of Greater Los Angeles to turn out in force and en masse to tell these neo-Nazis and plainclothes Klansmen "NOT IN MY TOWN! NOT ON MY WATCH!"

There was a closed meeting of about 50 CRJ activist this past Sunday for non-violent resistance training conducted by Abby Arnold and Vivian Rothstein from CLUE-LA. It was based on Rev. Dr. Martin Luther King’s six principles of nonviolence, with practice in the specific skills needed for the challenge we’re facing now. It was decided at this meeting that the September meeting would be at the usual place and open to the public. You are invited to join us, as are Santa Monica City officials and all local politicians who reject this new wave a fascist violence, and we know the police will be there.

The West Coast Collective did a few podcasts about the ruckus based on my video:

And Louis Proyect found this video of our own Fake Alaskan praising Syrian President Bashar Assad, proving that the white supremacist world of Left-Right convergence is a very tiny one.