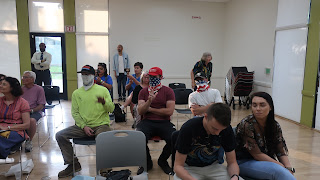 Committee for Racial Justice held a workshop on white privilege in at the Virginia Ave Park Center in Santa Monica, CA on Sunday, 9 July 2017. For the first time ever, a group of white nationalists showed up to disrupt the meeting. This is a troubling sign. The fact that they are now willing to invade peaceful meetings even in "The People's Republic of Santa Monica" as it has often been called, and the fact that the group behind this claims more than 160,000 "friends" on their facebook page, attests to the growth of this fascist movement since Trump's presidential victory. The mainstream media has been hiding this development and even Democracy Now has had little to say, so it will be up to us to expose it and fight it.

The CRJ Steering Committee wrote in a follow-up email:


During 6 plus years of monthly workshops, this was the first incident of this kind we have had. Unfortunately, we were inadequately prepared for this one. Clearly we want to be much better prepared for any recurrence in the future, and we want to let you know what steps we have taken and plan to take to that end. We have identified the group that these disrupters represented. The group is called the Red Elephants. They are pro-Trump and obviously racist and anti-Semitic.

I wasn't planning on making a video of the meeting but when I saw what was going on I shot some footage with a little Canon G9X Mark II that I recently purchased and now carry with me everywhere. (It's pocket size.) This is what I produced:

Anti-capitalist and anti-fascist fighters have long worn masks for good reason, and the Occupy movement made the bandana across the face very fashionable, but these bullies weren't hiding there face from the police or the Trump Justice Department. They are hiding their faces for the same cowardly reason the Klu Klux Klan always hides their's. The woman that felt she had to leave the meeting early because she had her twelve year old son with her is no doubt aware for the long history of African Americans being terrorized by white men wearing masks. Her family has lived in Santa Monica since the 1930's and in 2017 that fear has come back to her home town.

This is how the Red Elephants see themselves:

We are a freedom defense militia that are also media.
We were sick of seeing people get beat up in the streets by neo-marxist Antifa members and decided to show up and fight back.
We were sick of the mainstream media spreading lies about current events, so we decided to show up and fight back, and share the TRUTH!
We live stream at almost every rally, event and Town hall, fighting locally to change blue states to RED.
WE WILL TAKE OUR COUNTRY BACK.

Since they came to the meeting with a two person smartphone/selfie stick camera crew, it was obvious that they intended to produce a propaganda video of the event. I found it. Here it is:

Trump supporters crashed a white privilege seminar was held in Santa Monica, CA that was organized by a predominetly [sic] Jewish group that pushes white guilt throughout schools and communities across the nations. 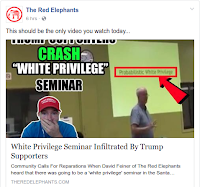 If you watch their videos or look at their website it will become chillingly clear that behind all the talk of "white genocide" they are preparing for the mass murder of people of color in the United States, and for them that includes Jews. While the mass media would rather talk about anything but this rising international white nationalist trend, and Trump is distracting us with a Tweet show, they are quietly building up their fascist forces like these young Red Elephants, until the white nationalist kabal now holding power in the White House, can sweep aside any remaining elements of our neo-liberal democracy and institute straight up racist rule!

We must fight back now!