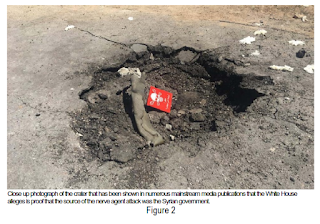 The Russian Foreign Ministry’s Director of the Department for Non-Proliferation and Arms Control Mikhail Ulyanov, made a valuable admission in his official remarks protesting the report from the OPCW Fact-Finding Mission that found "sarin had been used as a weapon," at Khan Sheikhoun on 4 April 2017. The Russians now agree that it was a sarin attack and that the crater in the street that has been the center of so much attention was indeed, ground zero. After having earlier argued that the chemical killers were released when the Syrian air force bombed a terrorist chemical weapons warehouse, they now agree with the OPCW report that the crater in the road was the release site. However they argue, in Tass, that the sarin bomb was not dropped from a plane, but rather placed there by terrorists as part of a false flag attack:


”The same applies to the crater at the site where sarin was used,” he continued. “We asked the OPCW technical secretariat to pay special attention to this issue, but our request was left unanswered. It appears that the authors of the report just did not care about fact that this crater does not fit the theory of an aviation bomb use.”

This makes it sound like they are preparing to fall back on a theory similar to the one first put forward by Dr. Theodore Postol. His theory was that jihadist terrorists dispersed a sarin filled pipe by setting off an explosive charge on top of it. At the time both the Syrians and the Russians were claiming that a Syrian SU-22 had dropped a conventional bomb onto a warehouse in which the terrorists were storing chemical weapons or the precursors for chemical weapons. Dr. Ted Postol later abandoned his terrorist pipebomb theory, after publishing three pieces in defense of it, so that he could support the Russian/Syrian version of what happened in Khan Sheikhoun that morning.

Now it sounds like they are abandoning their claim that nerve agents were inadvertently released because they bombed a warehouse. The OPCW has shown that the crater in the street was the source of what they have determined to be sarin or a sarin-like substance. That is the same crater that locals said was the result of a bomb dropped from an SU-22 that citizen plane spotters had tracked since take-off. So in this newest round of denials they are forced to concede the fact that sarin was used with a purpose that morning. That purpose was to kill Syrians opposed to the Assad regime and the site of that sarin dispersal is that crater locals all agreed was the source.

Note that this latest Russian denial, like the Russian and Syrian denials that came shortly after the attack, does nothing to support Seymour Hersh's claim that the Syrian's dropped a 500 pound conventional bomb on a two-story cinderblock building to kill four "high value targets."

In point of fact, neither the Russians nor the Syrians have said anything to back Hersh's claims that:


The Syrian target at Khan Sheikhoun, as shared with the Americans at Doha, was depicted as a two-story cinder-block building in the northern part of town...Russian intelligence depicted the cinder-block building as a command and control center that housed a grocery and other commercial premises on its ground floor with other essential shops nearby, including a fabric shop and an electronics store.

Or any of the rest of it. If Hersh is right about the original target and reason for hitting it, and he is also speaking truth when he says both the Russians and Syrians made sure this was well known my all players in the region, why have they never made these claims and in fact made quite contradictory claims?

Why is this story a Hersh exclusive? It's because he is feeding us the whole cloth.

Can we finally put to rest any reverence for Seymour Hersh's Pulitzer?