Tweet
In July, I reported on an attempt to crash the monthly meeting of the Santa Monica Committee for Racial Justice by a handful of white supremacists wearing masks or carrying cameras on selfie sticks. 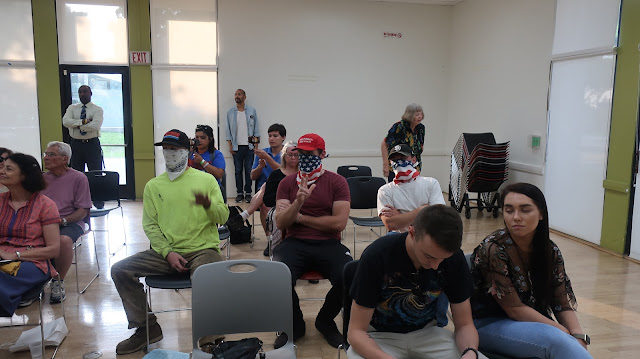 In August, the white supremacists returned in greater numbers. They had about 25 people, but this time we were ready for them. They intended to stop the meeting but ultimately they failed because their attempts to force their way into the meeting were repelled by a guard hastily formed from meeting participants. Although the Santa Monica Police had more officers on the scene than I even knew they had, it was up to CRJ members to stop them from gaining entry and while only a few blows were exchanged, there was a lot of pushing and shoving.

Each time the plainclothes nazis made an attempts to get into the meeting, a battle ensured. Each time, the cops just watched until the struggle had been decided in our favor. Only then did they step forward to put themselves between between these nazis and the CRJ members. The first time they did this it ultimately worked to nazis advantage. Let me explain.

The main entrance to the meeting room consisted of two sets of doors separated by a lobby. The first of these assaults took place at the outer doors, and once that had been repelled, a half dozen or so of our people set up a strong defensive line in front of the outer doors. Only after they had done this did the police step forward and put themselves in their place while telling them to go inside. Apparently these cops then abandoned their post, because less than a half-hour had passed before we found that we were confronted by a lobby full of plainclothes nazis attempting to breach the inter-doors. Then a four minute struggle took place, it's shown in the film, to stop them from entering the meeting proper. Once we had prevailed in that struggle, the cops again interceded.

Except for one or two, the white supremacist never got into the meeting, so the most they could do in the way of disruption was to bang on the windows. The cops watched them do this for far too long before they made them stop. I think the cops became concerned about how it would look it they actually broke the glass while the cops looked on. Anyway, I am quite sure that if I started banging on a 3rd Street Promenade window in sight of the SMPD it would have been handled very differently.

In the meeting we listened to a number of very good presentations on the so-called Alt-Right, and its range of fascist and racist organizations, and most topically, on how to deal with their attacks.

After the second attack had been successfully rebuffed, the SMPD again interceded in a way that supported the white supremacist goal by asking the leadership of CRJ to end the meeting early in the name of "public safety." In other words, give the racists what they want, even after they failed to obtain it by force, so we can all go home. Their argument was that with so many units deployed at the park, they were leaving the rest of Santa Monica unprotected, but given how little they did to protect the meeting, they certainly didn't need all those units in the park.

The matter was put to a vote, and to the credit of the CRJ membership, it went down in a resounding defeat. We went ahead with the meeting and completed our agenda.

I had my own footage from inside of the meeting. Some of that was shot by a friend with a second camera. Some of it was shot with a camera in one hand while I fought to close a door with the other. In addition to this footage, I was able to gather up the livestreams, facebook posts, and YouTube videos of a number of the nazis. One livestream went on for more than 5 hours, and covered not only the white supremacist view of the meeting (outside footage☺) but their after meeting discussions in a Burger King and even the intimate discussion of two nazis going back to Burbank. All told, I was able to gather up more than 15 hrs. of footage, including two other livestreams that were more than 2 hours long. When I synchronize them on my timeline I had no less than 3 camera coverage at all times, and at times, as many as six. Their banging on the windows provided me with an unforeseen benefit. It allowed me to precisely synchronize the inside and outside footage, while the victorious closing of the doors during the struggles provided something like a diegetic clapper-board. The real trick was boiling it down to less than a half-hour.

I first learned about the "Unite the Right" rally in Charlottesville, VA from these livestreams. At least three of the nazis attacking Santa Monica were going to it and two were scheduled to speak at it, and they were heavily promoting it among their followers. Still, I didn't attach much importance to it until I woke up Saturday morning and found footage of the white supremacist tiki torch "blood and soil" march with one of the Santa Monica meeting disrupters livestreaming it. With the events on Saturday in Charlottesville in mind, I saw the broader context of our struggle in Santa Monica and threw myself into the work with new vigor. I needed to have this video posted before I went back to work on Tuesday.

I found the after meeting and side discussions of these plainclothes nazis most revealing. I call them plainclothes nazis because they no longer wear Klan robes or Nazi uniforms. They dress like ordinary people, and they chat slogans stolen from the peace movement like "No Justice, No Peace" and "Whose streets, our streets," but when you listen to their intimate conversation they are as much for burning Jews and killing African Americans as ever. They describe what they are trying to do in Santa Monica as a "race war." They still see Hitler as a hero, and they also like Trump a lot. As they will tell you in their own words, they feel inspired by Trump and have even been told that he is watching them.

As you can see from the pictures above, the forces we faced in Santa Monica are part of a larger movement. They now have a leader in the White House and they are growing fast. Knowing they have Trump in the White House and Session in the Justice Department has embolden them. That is why they first showed up in Santa Monica and then had a national "coming out party" in Charlottesville, complete with a presidential endorsement.

We have to do much more than just watch this movement, and so far we haven't even done a good job of that. I consume NBC, ABC, CBS, CNN, MSNBC, even Fox News, not to mention Democracy Now and dozens of progressive online publications, and on this "Unite the Right"  gathering, I heard not a word. Had I not been making this film and listening to their conversations, I would have been completely surprised. Fortunately, some progressives were aware and did rally against the fascists. Mostly locals, I gather. The country should be thanking them, not criticizing them.

The real shame for the country would have been if the nazis rallied and no one protested!

We must vigorously fight this movement before it can link up with state power in the White House to destroy what democracy we do have and institute a fascist state.

The Southern California section of this movement can be expected to rally in Laguna Beach on Sunday. I hope there are protesters. 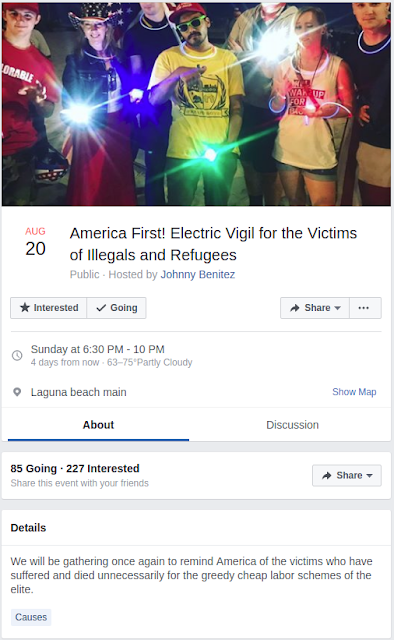 The Alt-Right was also planning a "March on Google"  in Venice, CA, and other places, on Saturday for firing of James Damore, the employee who circulated what is said to be a misogynistic memo. They now have cancelled it due, they said, to "Alt Left Terrorist Threats." They also planned similar marches in Atlanta, Austin, Boston, Mountain View, New York, Pittsburgh, Seattle and Washington, D.C. They claim they are not white supremacist and "join the President in condemning the actions in Charlottesville on August 12th." This effort was announced by "Jack Posobiec, a vocal Trump supporter and right-wing activist who is known for pushing the false "Pizzagate" conspiracy theory."

The next meeting of the Santa Monica Committee for Racial Justice is scheduled for Sunday, 3 September in the Thelma Terry Building Virginia Avenue Park as usual. These neo-nazis have declared Santa Monica their new "Berkeley." They have vowed to return for this meeting with "hundreds" of supporters and shut the meeting down. They have vowed to destroy SRJ.

While the Santa Monica fight is a ground they have chosen, it may actually work to our advantage in the larger war for hearts and minds. In critiquing the anti-fascist struggle waged in Berkeley, Jack Gerson wrote:


The murders in Portland and at the U. of Maryland and the threats to Keeanga-Yamahtta Taylor (and to LeBron James) are clear: these are virulent racist attacks by white supremacists, and the need to condemn and defend against them is clearly understood by the public. On the other hand, the series of confrontations in Berkeley and elsewhere between the alt-right and the black bloc appear barely relevant to most people. It has allowed the alt-right to pretend that all they want is to be able to hold a peaceful rally in a park to assert their right to free speech. To many, it has the appearance of two street gangs rumbling over turf. Furthermore, although the organizers of right wing rallies in Berkeley and elsewhere are hard-core racists, they don’t present themselves as such. Rather, they present themselves as standing up for their rights and as protectors of the public from authoritarian leftist thugs. (And there’s the black bloc, hooded and masked, looking every bit the popular image of terrorists!) Many of those who the alt-right brought to their Berkeley rallies were not themselves hardcore right-wingers, but believed they were there to defend free speech and liberty. So at this point tactically, our focus should be on protesting what our opponents do, not on their right to say it. 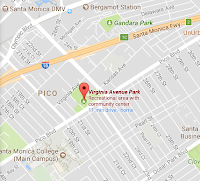 As you can see, from this perspective, Santa Monica is a whole 'nother kettle of fish. They may try to make it their new "Berkeley" but in this case they are coming to a destroy a peace group that has been operating in a fairly progressive community for more than six years. In defending the Santa Monica Committee for Racial Justice from fascist attacks and claims that it is anti-white because it is against racism!! (go figure?), progressive are standing on firm and popular ground.