Tweet
Basel Walfa has been the only other person on the regular contributors list here at Linux Beach. He is a Syrian from Homs and he has played an indispensable role in keeping this blog connected to the struggle in Syria, and its principle language, Arabic. He is an activist and a professional translator and he has translated important Arabic writings about the revolution into English so that we could make them available to a wider audience, and he has translated a few of my more important pieces into Arabic so that they could the shared more broadly in the struggle.

He was someone I could call upon the tell me what they were saying in a video or give me a quick read on some critical bits of Arabic that might come across my desk, and he would politely inform me when I had something mislabelled on the blog, sparing me much embarrassment at the hands of the "anti-imperialists."

He found the blog on twitter and he liked it. He sent me an email in April 2013 and described himself as "very involved in my Syria cause and supporting the revolution." At the time he was living in Egypt. I think what he really liked about this blog is the way I take on the so-called "anti-imperialist" Left. The first piece he translated into Arabic was my Counterpunch: So Wrong on Syria كاونتربانش : الخطأ الكبير في سوريا in May 2013. In July he was still in Egypt as the Syrian refugee community was coming under increasing attacks and very depressed about the rise of the "Islamist Mujahedeen" and "zero cooperation among the armed groups in all areas." He was at a low point then. 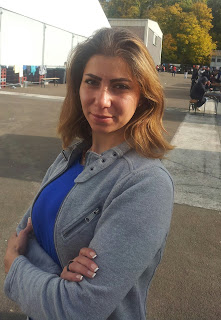 His girlfriend, Luna Watfa was still in Damascus and was there when the Assad regime attached parts of suburban Damascus with sarin on 21 August. He wrote me 5 days after the sarin attack that shook the world, that he was working with  a lady and she was documenting the massacre in East Ghouta and he clued me into the work of the Violation Documentation Center, sending me a report a few days later. Less than two week after the attack we publish the English translation of at report they had put together about the chemical massacre here under the titled When Paradise Turn to Hell. I didn't say at the time that the lady was Luna and she had written the report. Now that she is free from Assad's custody, proper credit can be given. It was a Linux Beach exclusive. Two weeks later Basel translated my response to the Mint Press fantasies in which Assad didn't do it. In December, when the Wall St. Journal was telling the world that FSA commander General Idris had fled to Turkey, Basel was able to give the real 411. Idris never left Syria.

2014 began the bad times for Basel & Luna. In January Luna and his brother were arrested in Damascus. His brother was released in less than 3 weeks but they held Luna on the very serious charges of "leaking fake photos of chemical massacre to foreign parties." He helped me better understand the true criminality of the the "anti-imperialists" claims of "fake photos" and "false-flags" and why he went to the trouble of translating my writing about that massacre. Out here in the blogosphere it always sounds like so much rhetoric, pick a side, it doesn't really matter, but on the ground in Syria, the Mint Press crowd was standing right next to Luna's torturers in some dark corner of Damascus.

After her arrest, Basel asked me to help them close Luna's facebook and other social media accounts. They closed her facebook account twice and each time it would be reopened as trap to catch those who contacted her. That was one of the techniques I warned about in my very first post about what was to become known as the Arab Spring. The Ben Ali regime used it against Tunisian bloggers and activists. Basel had a few friends make some quiet inquiries but thought publicity could be dangerous.

Eighteen months ago, when I was facing hard times myself and ran a GoFundMe campaign here to help me continue this work, this Syrian refugee, now back in Cairo, Egypt with his girlfriend in Assad's gulag, wrote me to apologize for his inability to contribute to my campaign.

For a variety of reasons, not the least of which was my taking on full time employment, I'd lost touch with Abdulla in more than a year until I reached out to ask if he could translated our statement "Hands off Syria" applies to Russia too.

When he replied, it was from a Syrian refugee camp in Kusel, Germany. He told me that Luna had been released from Assad's prison on 25 February 2015 after more than a year in custody. They were then able to get back together and start a new life in Turkey. They stayed in Turkey for several months but since they but since they thought there chances of re-uniting with Luna's two sons would be better in Germany, they "took the rubber boat 'death boat'" and migrated to Europe. 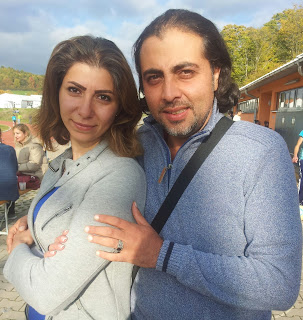 They have made that perilous journey safely to Germany but they living in a tent with 250 other people. Basel told me that his first professional translation was published a few months ago, "Post-Orientalism, knowledge and power in the time of terror" by Hamid Dabashi, Colombia university. But he was forced to leave his laptop behind in Turkey and has no access to Internet were he is so he is presently unable to practice his craft, for me or anyone else. Luna, who is a freelance journalist and photographer is also currently out of work.

Luna "documented the entire trip about refugees' suffering from the very beginning with videos and photos," and they "plan to produce a documentary on the unsaid details of refugees tragedy." Luna is already blogging about her time in Assad's custody at www.baslluna.wordpress.com and Basel plans to translate every word.

And I have decided its time to go back to GoFundMe again, but not for me this time. I'm doing fine just now. Thank You for helping get there with your support last time. This time I'm appealing to you to help these two Syrian revolutionaries get to the place they need to be. A place with enough stability and normalcy that they can continue their work in support of the Syrian cause. And, of course. a place with Internet access! They've already done the hard part by getting themselves to Germany. I asking you to help with the easy part, getting them the Euros the need to start a new life. Please contribute to the GoFundMe campaign that I have set up on their behalf and with their permission.


Click here for a list of my other blogs on Syria
Posted by Linux Beach at 12:10 PM