With Left support, Assad continues to kill in East Ghouta

This could be the sad assessment of world inaction while more that two hundred thousand Syrians have been massacred in less than four years. This has also been the silent banner of much of the Left and the so-called Peace and Just Us movement that has been quick to rush to the defense of Bashar and blame the carnage on NATO somehow. Over a year ago Assad got called out for killing with sarin after he used it on a massive scale just outside of Damascus. He then made a deal with NATO that saw him give up his chemical weapons but continue to kill with chlorine gas and everything else in his arsenal with impunity.

Eight months ago, I sat in an audience at USC and listened to David Swanson ridicule the idea that Syrian President Bashar al-Assad was responsible for the chemical deaths of over 1400 people in East Ghouta. He and others who took this pro-Assad stand, probably hadn't heard of East Ghouta before the sarin attack and haven't been following the struggle there since. They just popped up to throw smoke in the air after Assad's sarin attack because that attack made international headlines. Swanson didn't mention that Assad had been killing the people of East Ghouta with conventional bombardment for more than a year before that and he probably could care less that East Ghouta remains unconquered now and Assad is still killing there big time. Nevermind. On Saturday we received this report from the Syrian American Medical Society [SAMS]:


More than 30 people, including 6 children, were killed in airstrikes from Syrian government planes in the Eastern Ghouta suburb of Damascus yesterday. At the same time, Eastern Ghouta continues to experience a deadly siege - food, water, heat, and electricity are rarely available.

SAMS is proud to support critical field hospitals, ICUs, and birth centers inside Eastern Ghouta. These doctors are among 12 we support in one field hospital, performing lifesaving emergency surgeries. In December alone, the doctors in their field hospital saw 716 trauma cases and performed over 240 surgeries.

Assad's slaughter in Syria continues to be ignored today, even as US war planes join him in bombing his adversaries. The Media still spikes the stories and the Left all but ignores them, and for all the coverage of ISIS you might be forgiven for thinking that the jihadists are the biggest threat to civilian life and liberty in Syria, but that is far from the case, as this chart produced by The Syria Campaign too graphically illustrates: 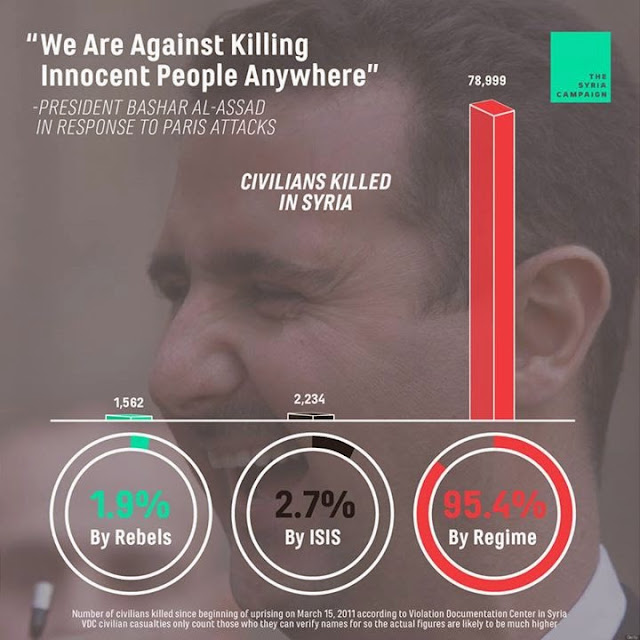 The regime of Bashar al-Assad may still have its friends on the Left, and it may not be the main enemy of Obama and NATO in Syria but it remains the main enemy of the Syria people and the main obstacle to peace in Syria and Iraq. Ignoring this reality is precisely what has led to the sorry state of affairs we see in the region today.