Who was Igor Bezler before he shot down #MH17?


"We have just shot down a plane."
--Igor Bezler

Everyone wants to know who was behind the downing of Malaysia Air MH 17 and the murder of 298 civilians completely uninvolved with the conflict over which they died in Eastern Ukraine. The most damning evidence to come out so far in that regard has to be the recording which Ukrainian officials have released in which they say Igor Bezler takes credit for downing the plane in a conversation with a Russian military intelligence officer named Vasili Geranin.

From the Security Service of Ukraine (SBU) supplied English translation at 14:40 GMT, about 25 minutes after the plane went missing we have this:


Igor Bezler: We have just shot down a plane. That was "miner's group. It fell down beyond Yenakievo (Donetsk Oblast).

Vasili Geranin: Pilots. Where are the pilots?

IB: Gone to search for and photograph the plane. Its smoking.

VG: How many minutes ago?

SBU also released this conversation between 'Major' and 'Grek' which took place 15:33 gmt as it becomes clear that what they thought was a Ukrainian Air Force IL-76 Transport was really a civilian airliner:

"Major": In short, it was 100 percent a passenger (civilian) aircraft.

"Greek": Are many people there?

"Major": Holy sh-t! The debris fell right into the yards (of homes).

"Greek": What kind of aircraft?

"Major": I haven't ascertained this. I haven't been to the main sight. I am only surveying the scene where the first bodies fell. There are the remains of internal brackets, seats and bodies.

"Greek": Is there anything left of the weapon?

"Greek": Are there documents?

"Major": Yes, of one Indonesian student. From a university in Thompson.

According to Total War, Igor Bezler is a Russian GRU agent and according to Reuters he is one of the leaders of self-proclaimed militia of Horlivka. He was born in Simferopol in Crimea in 1965. He served in the Airborne Troops of the Soviet Army in their war in Afghanistan and was awarded the Order of the Red Star. Until 2002 he was a Lieutenant Colonel in the Russian intelligence agency GRU. A few years ago he retired and settled in the Gorlovka region of Donetsk. He became active earlier in February 2014 as a leader in the Self Defense forces that took over Crimea. Then he aided the People's Republic of Donestsk and has been prominently involved in the separatist movement.

If this recording is authentic it is very strong evidence that pro-Russian forces are behind the tragedy of MH 17. There are a number of reasons for believing this is the real thing. For one thing, this video claims to be recordings of conversations that took place within hours of MH 17 going missing and it was posted to YouTube the same day. That doesn't leave a lot of time for fabricating these recordings, unless one is going to make the argument that the fabricators of the tapes and downers of the aircraft were involved in a massive plot in which all such details where worked out in advanced.

For another, we have the 24 April 2014 posting below from the same source, Служба безпеки України of a 17 April 2014 conversation between Igor Bezler and someone called "Alph" about the murder of Gorovskoy Deputy City Council member Volodymyr Rybak. Rybak was kidnapped in Horlivka on 16 April 2014. His tortured body turned up in the Seversky-Donets river on 22 April 2014.

This is the description and translation given by Paul Roderick Greogory in the Kyiv Post:

Bezler (Bes): "Alph," listen carefully, go into the City Hall, Rybak is there raising a ruckus. People are trying to cool him down. Take him out and torture him (otpressyuete, prison slang). Get him in the car and take him some place far away. Then let me know where to go. Do you understand? Stay connected! Muzhiki (guys), wrap him up and get him in the car. Tie him up - his arms, his eyes- so that he can’t see anything.

Notable in this conversation is that Bes wants to know where Rybak is being taken so he can deal with him himself. This would put Bes at the torture/murder site.

The second conversation follows shortly thereafter. Apparently Bezler asks whether any special ops people have been caught on the videotape:

Alph: "Bes," we watched the video, you can't see anything there: you can only see that he is trying to remove the flag from the city hall, and he is getting beaten up.

Alph: So none of our people can be seen there. Everything is "normalno" (OK)

I can't tell you whether Russian or Ukrainian is being spoken in these recordings so I'm in no position to authenticate them or compare the voices between the 17 April recording and the 17 July recording, but I'm sure native speakers can. Paul Greogory gives us his opinion on the earlier recording:


I do not believe that an English translation and interpretation of intercepted phone calls among Russian operatives organizing the kidnapping, torture, murder, and body disposal of a pro-Ukrainian political activist in eastern Ukraine have been widely circulated. Western readers will react with disgust that such brutal crimes are taking place without consequences in a major European country.

I am convinced the calls are authentic, despite Russian denials. We know the parties to the conversation except for one unidentified operative (“Alph”). The conversations are carried out in the crude language of criminal and prison slang. The tape bleeps out an expression that contains the F-word.

Western readers should now certainly react with disgust when they realized that by turning a blind eye to such brutal crimes taking place in a major European country without consequences they have encouraged Putin's aggression to the point where it reached out and took these 298 souls, 80 of which belonged to children.

1.) It's possible that the pro-Russian forces thought they were aiming at a Ukrainian IL-76 transport plane when they shot down the Boeing 777 Malaysia MH 17. Here are a few pictures for your consideration. 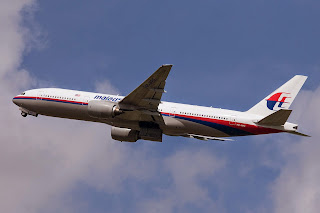 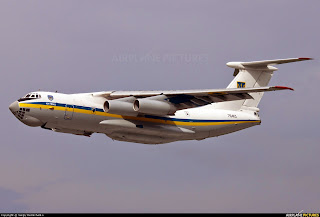 2.) Recently the pro-Russian forces have really stepped up missile attacks on Ukrainian military aircraft. Since beginning of June, pro-Russian forces have shot down at least 10 Ukrainian aircraft including five Mi-24 Hinds, two Mi-8 helicopters, one An-2, one An-30, a Ukrainian transport plane and 2 Ukrainian Su-26 fighters. On 13 June pro-Russian fighters shot down a Ukrainian Air Force II-76 military transport killing 40 paratroopers and 9 crew members. In recent days they have stepped up surface-to-air missile attacks on Ukrainian military aircraft with a SN-26 and SU-25 jets shot down from Russian territory.

3.) Pro-Russian fighters have claimed they have nothing that could have downed a jet at 10km. but earlier reports say otherwise. They boasted of capturing Buk [SA-17] surface-to-air missiles from the Ukrainian military two weeks ago. Buk missile system is not a MANPADS. It can target aircraft at a range of 25 km and to an attitude of 15 km. An Associated Press journalist reported seeing a Buk type system in the separatist-held town of Snizhne.

Putin's thuggishness is visited upon the world. For those that have been paying close attention to events in Syria, and more recently Ukraine, the Russian Mafia methods of Putin have been obvious for some time. It was only a matter of time before they reached out and touched people of all nationalities. The responsibility for these 298 murders lies directly with Igor Bezler, who should be tried and jailed for these crimes, and through him, with Vladimir Putin, who should be treated like Al Capone.


Apparently this Polit Russia site cranks out these flashy propaganda videos about individual commanders by the dozen. Can somebody please translate this? Its about the guy who's taken credit for shooting down MH 17. 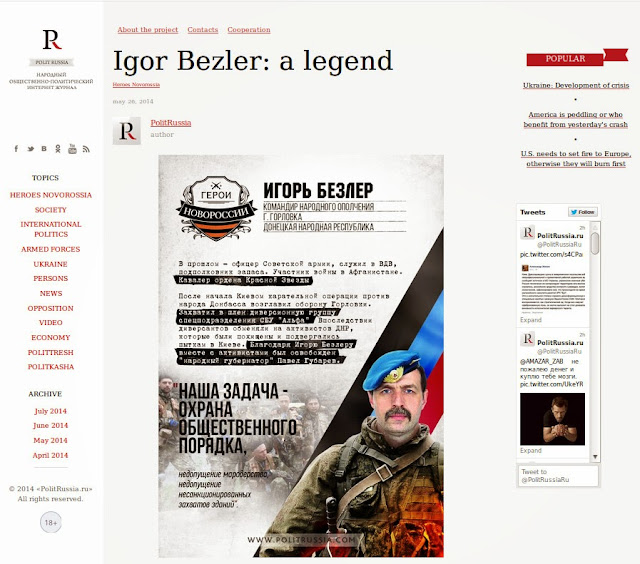 This is how Google translated this page of the site:


Kiev junta desperate tenacity with stamps of the resistance in the South-East outright lies and myths writes.

One of the most famous myths - about the commander self Gorlovka (DNI) Igor Bezler.

From the first days of confrontation in the Donbass Ukrainian media say about him except as a current lieutenant colonel of the Main Intelligence Directorate of the General Staff of the Russian Federation with the callsign "Demon." However, the facts tell a much different story.

According to the available fragmentary information Igor Bezler served in airborne troops of the Soviet Army. Participated in the war in Afghanistan, was awarded the Order of the Red Star. A few years ago he retired and settled in Gorlovka Donetsk region. There he went into business, it is far from my previous occupation, namely the provision of funeral services. Parallel - helped by fellow former "winged infantry", leading the local organization of veteran paratroopers.

Life retired lieutenant colonel changed the Nazi coup in Kiev. When after the Junta ultra rushed to rehabilitate Nazism and to prohibit Russian language Bezler joined protests in the Southeast. And when to subdue the rebellious region moved "National Guard", "Right sector" and bandits "Dnepr", "Donbass" and "Azov", a former military remembered the fact, to which he devoted most of his life. And headed Gorlovskaya self-defense.

Ukrainian authorities have been discouraged by how quickly lost Gorlovka, and to justify its unpopularity and incompetence - created the myth of Superman, nicknamed "Demon" - Lieutenant Colonel of the GRU, the Ukrainian government overthrows. In fact, it did the usual retiree with the support of local civilians and switched to his side police - was ashamed to admit.

But most of all Bezler popularity increased after he managed to grab a captive of three officers of the elite Special Forces of Ukraine "Alpha", abandoned in Gorlovka to capture the leader of self-defense and other local activists. It is on these commandos guide Donetsk People's Republic then exchanged been stolen and tortured in Kiev "people's governor" Donbass - Paul Gubaryov.

"SBU Special group arrived to capture Bezler - man holding ATC Gorlovki. Bezler himself seized those who hunt for him, and brought them here, and so will be all."

Today in the Ukrainian press, referring to Western news sources spread information that is exactly Bezler Ukrainian infantry destroyed the outpost under Volnovaha. But the information appears at least doubtful, as it told the unknown man in camouflage and mask-balaclava, who introduced "Beso".

Himself a man of legend Igor Bezler to popularity is not seeking an interview does not, does not and blogs to post in power does not appoint himself.

It seems that is what he truly seeks - it is a peaceful and quiet life after fascism withdraws from land Novorossia.