US: recordings on pro-Russian downing of #MH17 are real

Tweet
Linux Beach pointed to the responsibility of Russian GRU agent Igor Bezler, and his crew of "pro-Russian" BUK advanced air defense system operators, for the shooting down of Malaysia Air MH17 and the murder of all 298 people on board the day after the accident on the strength of recordings released by the Ukrainian security service [SBU] which included an intercept of Igor Bezler telling a Russian military intelligence officer "We have just shot down a plane," 25 minutes after MH17 was lost.

I was able to very quickly "authenticate" this recording before I cited it because I found "prior art" from the same YouTube channel of many similar claimed telephone intercepts that shared the same style and production values even though some had as few as 2 and 5 views. One, posted on 24 April 2014, claimed to be of an earlier intercept involving the same Igor Bezler.

In addition, since Igor Bezler is a very vocal fellow, there are other recordings of him on the Internet. This allows for comparison between the voice that is claimed to be from Igor Bezler taking credit for shooting down the plane and the other samples of his voice. I have also produced a composite video that allows easy comparison between the various samples. I concluded that this is the same voice and that understanding the language would only be a distraction in making that determination. This is how I authenticated the SBU recording. This Yahoo News 9 hours ago doesn't say how the US authenticated the recording. Maybe they read my blog?

Ukraine's SBU security agency on Thursday released recordings of what it claimed were phone talks involving rebels and a Russian military intelligence officer admitting that they had hit the passenger jet after mistaking it for a military aircraft.

The recordings were presented as key evidence to back up Kiev's claims that rebels -- supported by Russia -- downed the jet while the separatists accused Ukraine's army of being responsible.

"Audio data provided to the press by the Ukrainian security service was evaluated by Intelligence Community analysts who confirmed these were authentic conversations between known separatist leaders," the US embassy in Ukraine said in a statement. More...

Quite predictably, as quickly as the US government announced its conclusion that the recording were genuine, Russian sources came forward to pronounce them fakes. The Itar-Tass News Agency has published this today:

Russia
July 20, 14:37 UTC
MOSCOW, A tape posted by Ukrainian security services in the Internet and allegedly recording a talk between self-defense fighters about the destruction of a Malaysian airliner is a fake, experts said on Sunday.

A group of experts studied the tape and came to the conclusion that it was made up of numerous unrelated recordings.

“This audio recording is not an integral file and is made up of several fragments,” said Nikolai Popov, a reputable expert in sound and voice analysis. More...

The Russian website Customs, Voice of Sevastopol, goes into greater detail and includes a graphic that shows the voice waves and is suppose to support their analysis. 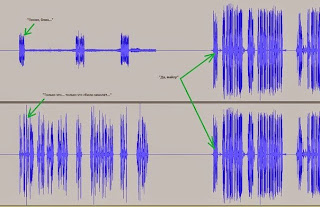 They go on to argue:


The tape’s second fragment consists of three pieces but was presented as a single audio recording. However, a spectral and time analysis has showed that the dialog was cut into pieces and then assembled. Short pauses in the tape are very indicative: the audio file has preserved time marks which show that the dialog was assembled from various episodes, the expert said.

Generally speaking, when confronting such claims of authenticity or the lack of it by governments and their "experts," we amateur investigators and "bloggers" operate with a serious handicap because we generally don't have access to the same high quality source material or the high calibre tools of government spies. In this case the field is more level because everybody outside of the Ukrainian government is dealing with the same AAC audio stream being delivered by YouTube. It became apparent that we both use the same high calibre software audio editing and analysis program, as soon as I loaded the disputed YouTube video into my favorite Linux audio tool, Audacity: 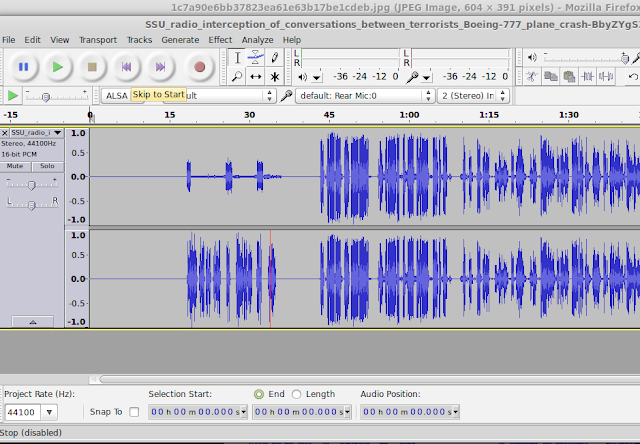 Look familar? Clearly their graphic is also a screenshot from Audacity of the same soundtrack with a few green arrows and notes added. They would have you believe that they are showing you the tell-tale signs that the recording is a fake. I don't see that, but I say more

I don't see how their experts could see what they claim to see. Specifically I say I don't see how they could say "the audio file has preserved time marks which show that the dialog was assembled from various episodes." Whatever editing, compositing and manipulation was done to this audio stream before it was uploaded to YouTube, and whatever were the "time marks" or other specifics of the original source material, what we all get on download from YouTube is a single Stereo AAC encoded audio stream @ 44100 Hz, s16, 95 kb/s with a new time code to sync it to the video stream. It simply no longer contains the information these Russia experts are claiming to find in it.

The subject is very technical and complex and they throw "experts" at you who say they have proven by this or that that the recording is fake but I think I know a thing or two about the subject matter and I just don't buy a YouTube AAC stream that preserves past time marks. Sorry, not buying it.

I think the intercepts of Igor Bezler are genuine and the Russian audio experts are fake.
Posted by Linux Beach at 6:37 PM