Tweet
More than a hundred thousand Syrians have been slaughtered in the struggle to overthrow the Assad dictatorship and while there have been many who have killed in this tragedy, the carnage can largely be laid at the feet of one man, Bashar al-Assad, and his regime. He ordered his army to open fire on peaceful protesters in the first days of the uprising and he quickly escalated to attacking crowds with helicopter gunships and dropping Russian cluster bombs on resistant communities.

Knowing that Assad is responsible for the deaths of tens of thousands of Syrians and laying waste to some of the oldest cities on Earth, it saddens me greatly to see members of the US peace movement marching under the banner of this dictator as was the case yesterday: 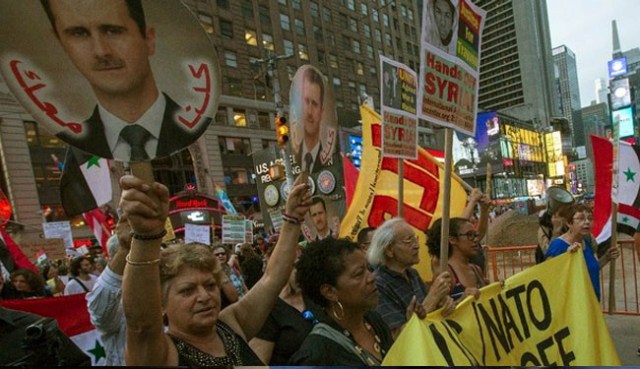 While thousands of Assad's soldiers have refused orders to fire on their people, defected and joined the Free Syrian Army, Assad has still been able to slaughter babies at will because of his command of the skies. His Scud missiles, helicopter gunships and Mig jets can rain down death with impunity anywhere in Syria, as when this jet dropped napalm on a playground, a story I reported yesterday. Unlike the gas attack, nobody can beg not knowing who is responsible because only Assad flies jets over Syria.

29 August 2013 Last updated at 17:43 ET
A BBC team inside Syria filming for Panorama has witnessed the aftermath of a fresh horrific incident - an incendiary bomb dropped onto a school playground in the north of the country - which has left scores of children with napalm-like burns over their bodies.

Eyewitnesses describe a fighter jet dropping the device, a low explosion, followed by columns of fire and smoke.

This monopoly of air power has been Assad's hold card. Obama has helped him hold it and use it by refusing Assad's opposition any modern anti-aircraft weapons. Not only has he refused to supply this or any military support at all to the people Assad has been slaughtering, he has used his clout as president of the United States, to make sure no effective anti-aircraft weapons reached the opposition. I criticized this policy in:

We now know the FSA had purchased Russian made SA-7 MANPADS [Man Portable Air Defense Systems - i.e. shoulder fired anti-aircraft missiles] that could have saved thousands of Syrians from perishing under Assad's bombs had Obama not dispatched the CIA to Turkey to make sure those weapons stayed locked up in a warehouse in Turkey.

The excuse for denying the opposition MANPADS has always been that they might fall into the wrong hands, meaning they might get to terrorists that could use them to bring down an airliner. That excuse has alway been very shaky because there are many precautions that can be taken and without them thousands are already dying so maybe its worth the risk?


How Obama's "No Gas Masks for You" policy aids Assad's slaughter
Now we have this report that Obama also refused to send gas masks to the opposition in Syria and used the same lame excuse, that the gas masks might fall into the wrong hands! As if al Qaeda or any other terrorist group couldn't find a few gas masks unless thousands were distributed to Assad's future gas attack victims.

Activists on the ground in Syria have said that their requests to the Obama administration for gas masks date back more than a year and have been ignored or rejected at every turn. This was true even after the Obama administration confirmed the use of poison gas by the Assad regime in Syria. This was true in spite of large US stockpiles of gas masks in the region left over from the Iraq war.

The Daily Beast is reporting:


Obama Refused to Send Gas Masks to Syrian Opposition for Over a Year
by Josh Rogin
Aug 29, 2013 4:45 AM EDT
Syrian opposition groups have been asking for gas masks and chemical-weapons protection gear for more than a year—and the Obama administration decided not to supply them, Josh Rogin reports exclusively.

The Obama administration has refused to send gas masks and other chemical-weapons protection gear to Syrian opposition groups, despite numerous requests dating back more than a year and until the reported chemical-weapons attack that struck the Damascus suburbs August 21.

Following the harrowing attack that left more than 1,300 dead and more than 3,000 injured in East Ghouta and other Damascus suburbs, the Obama administration is contemplating a strike on the regime of Bashar al-Assad. But Syrian civilians are still trying to cope with the tragedy and treat the wounded, who include scores of children caught sleeping when the gas was dispersed. The attack zone has a fatal shortage of gas masks, chemical-weapons protection gear, and the nerve agent antidote atropine; civilians and activists have been forced to resort to crafting makeshift masks out of everyday household items.

More chemical-weapons attacks could come, and there is now an urgent demand in rebel-held areas for gas masks and other gear. But there is also anger and frustration among opposition leaders that despite more than a year of requests to the U.S. government, the Obama administration did not send any gas masks or chemical-weapons protection gear to opposition-controlled areas.

“Almost three months ago, we received intelligence information that the regime forces may use chemical weapons in Homs,” said Abo Saleem, the directing commission secretary of the Council of Homs Province and a member of the political bureau of the Revolutionary Council of Homs, in an interview with The Daily Beast. “I forward the information to the State Department telling them we are afraid of the use of chemical weapons by the regime and we need gas masks and some training to prepare for such an attack. I got no response. Two weeks after that, the regime used chemical weapons in the old city of Homs, as we were expecting. We sent the State Department reports, but nothing happened.”

In a June email to several administration officials, viewed by The Daily Beast, Saleem begged the U.S. to provide gas masks in advance of further chemical-weapons attacks and warned that without them, the civil war in Syria would only result in more casualties. More...

And the reason for refusing Assad's future gas victims gas masks? The Daily Beast piece covers that too:


“There are a lot of gas-mask kits in excess supply. It was not an issue of availability,” the former official said. “In the early days of the Syria conflict, even the smallest amount of aid to the Free Syrian Army was viewed with great concern. It was a lack of foresight by administration bureaucrats. Unfortunately, now we’re seeing the consequences.”

A senior Obama administration official confirmed to The Daily Beast on Wednesday that the White House did review the issue last year and determined it wouldn’t provide any gas masks or other chemical-weapons protective gear to the Syria opposition because of fears the equipment could get into the wrong hands.

That was a lame excuse for not allowing the Syrians Assad has been killing adequate weapons with which to defended themselves but it is a downright criminal reason to deny people gear whose only purpose is to stop poison gas from killing people.

So now we know that while Obama was daring Assad to use chemical weapons he was at the same time denying Assad's victims the means of protection. I have long been saying that Barack Obama has always been in Assad's corner in his fight against the Syrian people. This is just one more proof.

Barack Obama already has a lot of Syria blood on his hands even before he lets the first missile fly.

For more on Obama's real Syria policy, see these other posts by me:
Barack Obama's Courtship of Bashar al-Assad
Barack Obama's Courtship of Bashar al-Assad Exposed!
Obama "green lights" Assad's slaughter in Syria
Assad's Redline and Obama's Greenlight!
Chemical weapons use in Syria, Has Obama's red-line has been crossed?
AP weighs in on Obama's Green Light for Assad's slaughter in Syria
Syria: Obama's moves Assad's "red line" back as SOHR reports 42,000 dead!
SecState John Kerry and his "dear friend" Bashar al-Assad
How Obama's 'No MANPADS for you' policy in Syria is backfiring
More thoughts on Obama's 'No MANPADS for you!' policy
Obama: Did the CIA betray Assad's opposition in Syria?


Click here for a list of my other blogs on Syria
Posted by Linux Beach at 1:21 PM