Even the Associated Press is starting to notice what I pointed out months ago, namely that Barack Obama's "red line" was also a "green light" for Bashar al-Assad's continued slaughter by every other means. This is hot off the presses:

Obama's 'red line' may be giving Assad an opening

WASHINGTON (AP) - President Barack Obama's chemical weapons position on Syria may have given Bashar Assad an unintended opening: The embattled Syrian leader appears willing to use other deadly tactics, including Scud missiles, without fear of U.S. retaliation.

The White House casts Assad's escalation against rebel forces as a sign of his growing desperation as his opposition gets stronger and enjoys more international support, including from the United States. But some human rights groups and Middle East experts say Obama's "red line" has given Assad a green light to launch attacks on his own people through other conventional means. More... 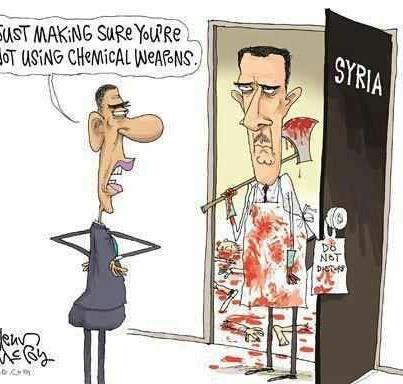 AFAIK the phrase "green light" was first applied to President Barack Obama's "red line" statement on 20 August 2012 by me here at the Daily Kos when I published Obama "green lights" Assad's slaughter in Syria four hours after he first made his "red line" comments in the White House Press Briefing Room. That diary has been shared, liked and tweeted hundreds of times and that specific metaphor has clearly become part of the Syria dialogue, even Bashar al-Assad felt the need to remark "Syria doesn't need a green light from anyone" in a rare interview, but I believe it all started right here at the Daily Kos.