Tweet
On Monday I showed that an image being widely promoted in the Iranian and pro-Assad media as that of dead children said to be among 450 Kurds they claimed were massacred by Syrian rebels was in fact a year old image of child drone victims. In other words, it was a fake image.

Also on Monday, the Iranian PressTV new outlet put out this story about the same alleged massacre, together with a video report that was also posted on YouTube. This video is also a phony, as we shall see:


A gruesome video has emerged on the Internet, showing foreign-backed militants in Syria setting three Syrian Kurds on fire.

The video, which was posted online on Monday, shows the al-Qaeda-affiliated group al-Nusra Front militants pouring a flammable liquid on the hand-cuffed, blind-folded men who appear to be Syrian Kurd soldiers.

The militants then push the three into a fire they have made.

Press TV cannot independently verify the authenticity of the video.

Reports said that al-Nusra militants attacked Tal Abyad district of Raqqa governorate in northern Syria on Monday, killing 450 civilians. The victims were said to be women, children and the elderly. More...

The PressTV video does depict the very ugly scene of three men being burned alive but this didn't happen in Syria, and it wasn't done by "the al-Qaeda-affiliated group al-Nusra Front militants" as the pro-Assad propaganda outlet claims.

That video came from Iraq and was posted on-line 09 April 2011, almost two years before the events PressTV claims it is showing. It shows up as a link in a posting to the Islam Watch website on 9 April 2011 with the title Islamic Barbarism: Gays Burned Alive in Iraq. The link leads to a video posted on Zandiq.com. That video doesn't permit embedding but here is a screenshot from that 2011 video: 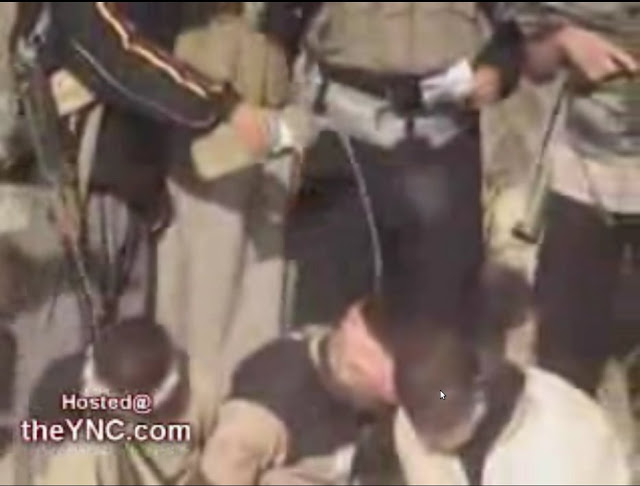 And here is a screenshot of how it is used in the PressTV report to represent Syrian opposition fighters burning Kurds. 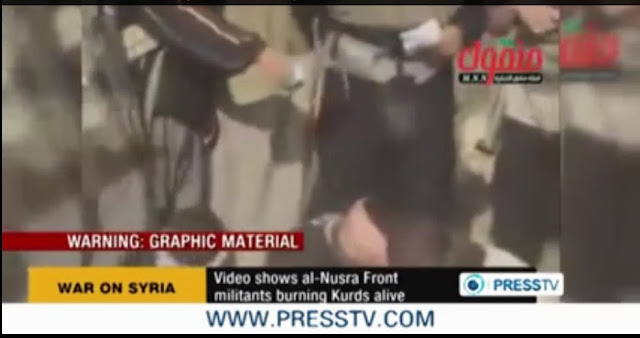 Once again the pro-Assad propaganda machine has been caught in a lie but that doesn't stop Richard Becker of the ANSWER Coalition shilling for RT on this story: 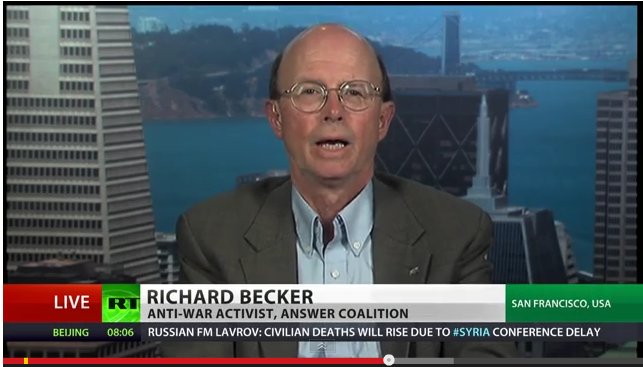 Click here for a list of my other blogs on Syria
Posted by Linux Beach at 5:48 PM