Julian Assange on Democracy Now: Revising the history of his Trump support

Tweet
Democracy Now dedicated the whole hour to an interview with Julian Assange today, and the best thing about it was Allan Nairn, long time investigative journalist and activist, who Amy Goodman brought in to debate Assange. After Assange noted that we had two terrible choices in this election, Nairn said:


I agree with that. However, I would note that the Trump campaign thought that WikiLeaks was on their side.

Now, the idea, that Mr. Assange just suggested, that Trump and Clinton were equally dangerous, two different deadly diseases, I think is wildly and gruesomely mistaken. Clinton represented a criminal establishment. But Trump and the people he brought in with him make it worse, make it even more criminal. This idea that it was just a choice between the lesser of two evils, well, in politics, in life, you fight like hell to have good choices, to have better choices—in this case, Sanders was a better alternative—but once that is no longer possible, then of course you choose the lesser evil. What do you want, more evil? More killing? More pollution? More abuse of immigrants? More racism? More impunity for corporations? More aid to death squads? More spending for the military? All of that is what you get with Trump, in distinction to the bad—the other bad things you would have gotten with Clinton. And the win of Clinton was not—or, I’m sorry, the victory of Trump was not equally as bad as it would have been if Clinton had lost. It’s a catastrophe. It’s an utter catastrophe. And those who are poorest, those who are already most oppressed and most vulnerable, are the ones who are suffering most as a result.

Nairn got to this very eloquent summary of the problem with the "don't vote for the lesser-of-two-evils" thesis via this rather childish exchange:


ALLAN NAIRN: OK. Well, my view of this is that during the campaign, WikiLeaks often suggested that Trump would be less dangerous than Clinton.

JULIAN ASSANGE: No, we didn’t.

ALLAN NAIRN: I think you did.

JULIAN ASSANGE: No, we didn’t.

ALLAN NAIRN: I think that concept is wildly, gruesomely mistaken. There was the argument—well, it’s just—

JULIAN ASSANGE: Well, that’s fine—it’s fine for you to say that, but you should understand that, no, we didn’t. In fact, I was asked that question directly on Democracy Now! at the time about what my position was, asked which one I preferred. And my response is, being asked this question is being asked: Do I prefer cholera, or do I prefer gonorrhea?

Well, we have to say there is some evidence to support Nairn's claim, and critique Assange's historical revisionism. Even his 25 July 2016 "Choosing Between Trump or Clinton is Like Picking Between Cholera or Gonorrhea" appearance on Democracy Now that he raised in his defense supports Nairn's argument. True, Assange's seems to think the "deep state" controls everything "So it doesn’t make much difference in the end," but then he spent the whole show bashing Clinton with hardly a critical word against Trump.

Likewise, he was critical of only one presidential candidate when he appeared on Sean Hannity's FoxNews segment Assange on the dangers of a Hillary Clinton presidency, 7 September 2016.

I guess Harris just better shut up then!


#Debate Trump is right that #Libya was largely destroyed as a result of Clinton's actions https://t.co/E2oAtKJ4ei
— WikiLeaks (@wikileaks) September 27, 2016

More on this later.


@JeremyCliffe "We open governments". We have hundreds of thousands of docs on Clinton and have expertise in Clinton, not Trump.
— WikiLeaks (@wikileaks) September 11, 2016

Hillary Clinton set for landside win with Trump having less than 4.8% chance to win based on polls accross this week https://t.co/fkUdbGO6Ww
— WikiLeaks (@wikileaks) August 8, 2016

There is also this: After the election Julian Assange did an interview with di Stefania Maurizi for the Italian website Repubblica, 23 December 2016. This excerpt is from that interview:


What about Donald Trump? What is going to happen?

"If the question is how I personally feel about the situation, I am mixed: Hillary Clinton and the network around her imprisoned one of our alleged sources for 35 years, Chelsea Manning, tortured her according to the United Nations, in order to implicate me personally. According to our publications Hillary Clinton was the chief proponent and the architect of the war against Libya. It is clear that she pursued this war as a staging effort for her Presidential bid. It wasn't even a war for an ideological purpose. This war ended up producing the refugee crisis in Europe, changing the political colour of Europe, killing more than 40,000 people within a year in Libya, while the arms from Libya went to Mali and other places, boosting or causing civil wars, including the Syrian catastrophe. If someone and their network behave like that, then there are consequences. Internal and external opponents are generated. Now there is a separate question on what Donald Trump means." 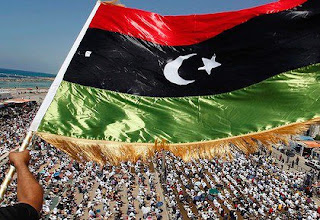 Before we get to Assange's meaning of Trump, we must note the chauvinism with which he deals with the Libyan people and their aspiration to live in a Libya not ruled by the murderous Gaddafi dictatorship. When he accuses Hillary Clinton of being "the chief proponent and the architect of the war against Libya," one might assume he is talking only about NATO intervention in the Libyan civil war that had been going on for more than a month before that, but as we read further we see no recognition of a civil war on his part at all. No role for Libyans except in the dying. He puts the number at 40,000. Linux Beach and most knowledgeable sources think it closer to 30,000. No matter. Julian Assange blames all of these deaths on Hillary Clinton, even though the Gaddafi regime had killed thousands upon thousands before the no-fly zone was imposed. Whether it was 30,000 or 40,000 that died in that war, we have only to look to Syria to approximate what the situation would have become in Libya had Gaddafi been given Assad's immunity for murder. Most likely, the Libyan conflict, like the Syrian one that started a month later, would still be going on with maybe 200,000 Libyans dead, and still counting. 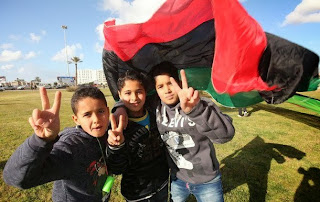 Gaddafi hired mercenaries from Mali to suppress his own people. He armed these mercenaries. When the Libyan people defeated him, there were no foreign armies on the ground, those mercenaries fled back to Mali with Gaddafi's weapons and started making trouble. All of this is Hillary Clinton's fault, in the mind of Julian Assange. He doesn't even see contradictions among the people of Mali as the source of that conflict. He accuses "arms" of "causing civil wars." Oppressed people escape his equation entirely. This is how he can say the war wasn't for an ideological purpose. Libyans on both sides would disagree, but who asked for their opinions?

Julian Assange also blames what he thinks of as Hillary's War for the refugee crisis in Europe even though very few Libyans have been leaving Libya in the historic refugee streams leaving Libya for Europe in the past few years. The greatest number have come from Syria, fleeing areas being bombed without a no-fly zone. Others have been fleeing active wars in sub-Saharan Africa and as far away as Afghanistan. These refugee crossings also took place during Gaddafi's time. The difference is now, due to the increased violence, especially in Syria, they are much greater, and Gaddafi is no longer there to extort billions of euros from Europe in return keeping refugees in detention facilities, or simply taking them out to the desert to die.

Sharing a podium in Rome with Italy's Prime Minister Silvio Berlusconi in 2010, this is how Col Gaddafi spoke of the European refugee crisis before it was all Hillary Clinton's fault and while Gaddafi was demanding $6.3 billion a year from the EU to slow it down, Gaddafi warned:


"Tomorrow Europe might no longer be European, and even black, as there are millions who want to come in. We don't know what will happen, what will be the reaction of the white and Christian Europeans faced with this influx of starving and ignorant Africans. We don't know if Europe will remain an advanced and united continent or if it will be destroyed, as happened with the barbarian invasions."

This is the kind of political leadership Assange likes, which brings us to something else Assange says above: Immediately after he blames the European refugee crisis on Hillary's War, he accuses it of:


"changing the political colour of Europe"

Just what do you suppose he meant by that?

To hear Julian Assange tell it, the revolutionary struggle of the Libyan people did not exist. To the extent they participated at all, they were the unwitting agents in a bid to put Hillary Clinton in the White House. He doesn't even mention US President Barack Obama, who happened to be Clinton's boss at the time.

Now back to Assange's opinion of Trump. This is the next question in the interview:


What do you think he means?

"Hillary Clinton's election would have been a consolidation of power in the existing ruling class of the United States. Donald Trump is not a DC insider, he is part of the wealthy ruling elite of the United States, and he is gathering around him a spectrum of other rich people and several idiosyncratic personalities. [Is "idiosyncratic personalities" wikispeak for white nationalists? - LB] They do not by themselves form an existing structure, so it is a weak structure which is displacing and destabilising the pre-existing central power network within DC. It is a new patronage structure which will evolve rapidly, but at the moment its looseness means there are opportunities for change in the United States: change for the worse and change for the better."

This definitely sounds to me like he thinks Donald Trump is the lesser of two evils. What do you think?