Of course, Russian bombs are incredibility noisy when they explode in Syria. The question is: Will they be heard in the United States? I was surprised when CBS This Morning made no mention of Syria or new Russian actions there. I was hoping for reports of any new attacks overnight and I know there had been attacks over the weekend this weekday news show had never mentioned, so I expected at least a short report. Democracy Now this morning opened with the US strike against the Kunduz Hospital that killed 22 and followed it up with two stories about this and other US war crimes in Afghanistan, but it mentioned no new Russian air attacks in Syria. It did say an air strike killed a family of 5 and a rescue worker in "northern Syria," which ain't too specific, and it was even less specific about who was responsible for this war crime, saying only "It is unclear who carried out the airstrike." Like the CBS show, Democracy Now had the weekend's news to summarize in its Monday brief.

So these early US reports left me hopeful that Syrians had been spared another day of playing Putin's new game of Russian roulette. But after I checked my twitter feeds and Syrian sources, I found that had not been the case and this raised fears that what is, more than ever, looking likely to become the first holocaust of the 21st century, will be carried out with the same media blackout as before even after Patrick Cockburn's "heavy hitter" has joined the killing spree.

I find this very troubling and ominous. Generally, the US bourgeois media can be depended upon to give wide publicity to the bad acts of a major rival. Sometimes they will even make up false stories as part of their propaganda effort, but when there is real news to report that will put say, Russia, in a bad light, generally they will jump all over it. Generally. When they don't, it is usually because they have some other ulterior motive, and if they forgo the opportunity to report that Russia is slaughter civilians in Syria it may mean that they are giving silent consent to the Russian efforts. I find this a very ominous development, both for Syrians and the world.

So it would appear that once again, the task falls to bloggers like me to try and keep you inform about events the bourgeois and "Left" media would rather keep hidden from you.This is what I've pulled together this morning:

The Institute for the Study of War gives us an overall assessment of these recent Russian attacks, without covering Sunday's contributions:

Key Takeaway: Russian airstrikes continue to primarily target Syrian opposition groups in areas far from ISIS's core terrain. These strikes are concentrated in northwestern Syria, particularly in rebel-held areas of Idlib Province and the northern countryside of Hama Province. The Russian Ministry of Defense (MoD) claimed only three airstrikes targeting positions in known ISIS-held terrain between October 1 and October 3. However, local reporting only confirmed two of these strikes. The Russian air campaign in Syria appears to be largely focused on supporting the Syrian regime and its fight against the Syrian opposition, rather than combating ISIS.

High-Confidence reporting. ISW places high confidence in reports corroborated both by official government statements reported through credible channels and documentation from rebel factions or activist networks on the ground in Syria deemed to be credible.

Low-Confidence reporting. ISW places low confidence in secondary sources that have not been confirmed or sources deemed likely to contain disinformation. 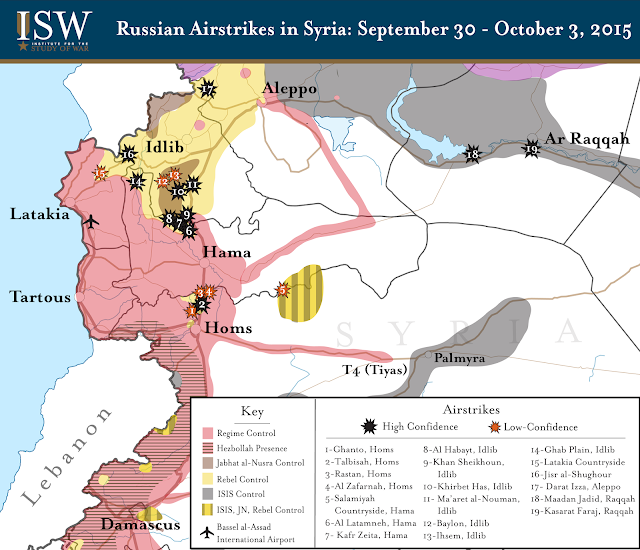 While RT and other pro-Putin outlet are bragging about their smart-bombs, Eliot Higgins has caught them using anti-personnel fragmentation bombs:


And Yalla Souriya reported on the Russian use of cluster bombs on Aqrab:

9:52 AM, 4 October 2015
YallaSouriya
Russian aircrafts targeted Aqrab with more than 40 missiles plus those who contain cluster bombs.
Russians have been given a building in centre of Hama city in Al Sabuniya. The building was an AF branch and has become russia HQ wih the russian flag flying on the buliding to. There are more than 1050 russians soldiers and officers in Hama with 200 soliders in the new buidling. The buidling is disguised as a center for refugees under Russia sponsorship.

More links:
The Interpreter reported that Russian Fighter Enters Turkish Airspace, 5 Oct 2015
Jonathan Marcus, defense correspondent for the BCC has a report titled Syria: What can Russia's air force do?, 1 Oct 2015, which gives break down of Russian military capabilities in the region.

Witnesses of Russia’s bombing campaign in northwest Syria describe carnage and civilian casualties in areas far from those under ISIS control.
1 October 2015
ISTANBUL — The drones had been flying overhead for days, and everyone in Talbiseh felt a sense of dread. When the jets flew overhead on Wednesday there was almost no warning before they dropped their payloads.

“We are used to Syrian planes; they hover for five minutes or more before they carry the raid out.” recalls Omar Qayson, a 19-year-old activist who lives about two miles from the small city north of Homs. It was targeted in Russian air raids on Wednesday and Thursday. “But Wednesday’s raid was quick and sudden. It was surprising. There is usually an alarm that goes off in the town that allows people to hide in the shelters, but not this time.”

Claiming to spearhead a fight against ISIS, Russia launched airstrikes on the northwest of Syria as part of what appeared to be a bold gambit to shore up the regime of Bashar al-Assad and fight off rebels advancing on his strongholds. But witnesses to the Russian air strikes in Syria described scenes of civilians caught up in the carnage and feared that Moscow intended to pursue the same brutal Assad strategy that has led to tens of thousands of civilian deaths.

“They targeted civilians,” said Hassan al-Araj, a doctor who was treating casualties from the strikes in the province of Hama, speaking to BuzzFeed News by phone. He said that raids by Russian jets in two villages had killed at least one woman and wounded eight civilians, some of them in critical condition.

Araji said there were no ISIS fighters in the area, an assessment in sync with painstakingly researched maps by Western analysts detailing which forces in Syria control which territories. “The Russian pilot will say that he killed ISIS, but I want to send him a message: You killed a woman who was sick and you destroyed buildings for civilians and they became homeless in the winter because of you,” he said. More...

The US Left should hang its head in shame that it still welcomes into its ranks groups that are willing to defend the Vietnam-Iraq styled destruction Syria just because it is coming from Russia and its puppet government in Damascus. This makes Russia the perfect instrument with which to carry out the military annihilation of the Syrian Revolution which all the big powers, including those the "Left" have long accused of supporting "regime change" in Syria, favor. But which the United States could never get away with attacking directly. The question now is, will we let them look away while Russia does the dirty deed for them? 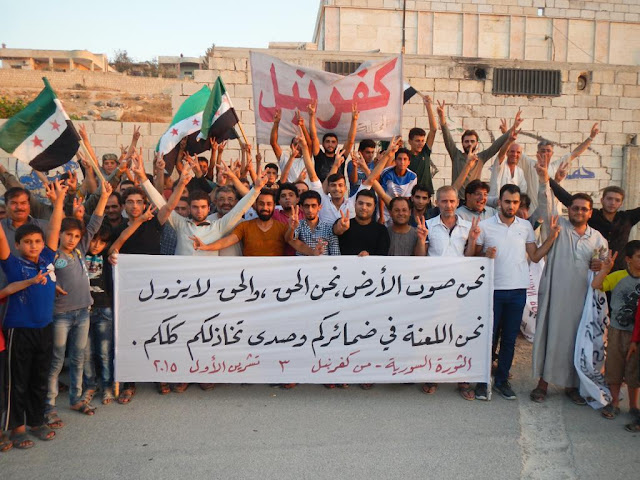 Click here for a list of my other blogs on Syria
Posted by Linux Beach at 1:38 PM