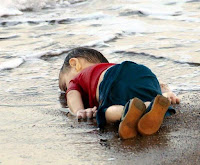 Now that the image of a drowned Syrian child in Turkey, and the continuous stories of migrant rescues off the coast of Libya, have brought this issue to center stage, I thought it might be useful to republish excerpts from a couple of my earlier blog posts that described how this issue was handled by Libya under the dictatorship of Mummar Qaddafi. This need is even greater because many in the "anti-imperialist" crowd still pine for Qaddafi and look upon his reign as the "Good 'ole Days" in Libya. They point to the freedom Africans [and Syrians] now have to leave Libya as one more example of why that revolution should never have been supported.

Last August, Qaddafi attempted to use European fear of unchecked waves of African immigrants to extort money from the Europe, telling them the EU should pay Libya at least 5bn euros (£4bn; $6.3bn) a year to stop illegal African immigration and avoid a "black Europe".


"Tomorrow Europe might no longer be European, and even black, as there are millions who want to come in," said Col Gaddafi, quoted by the AFP news agency

"We don't know what will happen, what will be the reaction of the white and Christian Europeans faced with this influx of starving and ignorant Africans," Col Gaddafi said.

"We don't know if Europe will remain an advanced and united continent or if it will be destroyed, as happened with the barbarian invasions."

When it comes to immigrant policy, Qaddafi is on the same page as Anders Behring Breivik and other violent neo-fascists that are troubling Europe. For much of the past decade, Qaddafi has been working with well known racist, Silvio Berelusoni, the Italian PM, to turn Libya into the cork that keeps African immigrants bottled up. In September 2004 Human Rights Watch wrote:


Libya’s recent immigration “reforms,” introduced by Colonel Muammar Gadaffi apparently after overtures from Italian premier Silvio Berlusconi, resemble a catalogue of human rights abuses against migrants and asylum-seekers. African internees and migrants in Libya are being detained in what one MEP has described as “catastrophic conditions.” And Libya continues forcibly to deport Eritrean refugees to Eritrea, where they face arrest, illegal detention and torture. If Libya is called on to run EU processing camps, we can surely expect more of the same.

Last December, HRW wrote about Libya in their world report on abuse and detentions at borders:


Since May 2009, Italy has joined forces with Libya to patrol the waters from the coast of Libya to Italy’s Mediterranean territories, principally the island of Lampedusa. Libya in 2010 operated patrol boats provided by Italy with Italian personnel on board to interdict boat migrants on the high seas and in Libyan waters and return them summarily to Libya with no screening to identify refugees, the sick or injured, pregnant women, unaccompanied children, victims of trafficking, or victims of violence against women. All interdicted boat migrants are detained upon arrival in Libya in overcrowded and unsanitary conditions. Libya is not a party to the 1951 Refugee Convention and has no asylum law or procedure. In April, Libyan Foreign Secretary Moussa Koussa said his country “does not have any refugees but only illegal migrants who break the laws.” In July the government said that there were 3 million irregular migrants in Libya. A new law on “Illegal Migration” criminalizes trafficking of migrants but does not mention protections for refugees.

In June, Libya closed the office of the UN High Commissioner for Refugees (UNHCR) in Tripoli and expelled its representative. It later allowed the office nominally to reopen but only with highly restricted permission to work on behalf of refugees and asylum seekers whom it had registered prior to closing, and without access to newly detained migrants and asylum seekers.

On June 28, a group of detained Eritrean migrants tried to escape from a migrant detention center after Libyan officials allowed Eritrean embassy officials to take their photos and forced them to complete forms raising fear of deportation. In response, Libyan authorities transported 245 Eritrean detainees from the Misrata detention on Libya’s northern coast to another detention center at al-Biraq, north of Sabha, in an apparent attempt to deport them. Some of these Eritreans were among those whom Italy had forcibly returned to Libya without giving them an opportunity to claim asylum. After an international outcry, Libya released this group but did not provide them with any support or protection. They remain in Libya.


"Daniel," a 26-year-old Eritrean interviewed in Sicily, told Human Rights Watch what happened after Maltese authorities interdicted the boat he was on and towed it to a Libyan vessel, which brought his group back to Libya (to read Daniel's complete account, please visit: http://www.hrw.org/en/node/85530 ):

"We were really tired and dehydrated when we arrived in Libya. I thought, ‘If they beat me, I won't feel a thing.' When we arrived, there were no doctors, nothing to help, just military police. They started punching us. They said, ‘You think you want to go to Italy.' They were mocking us. We were thirsty, and they were hitting us with sticks and kicking us. For about one hour they beat everyone who was on the boat."

They were taken to Misrata prison in a crowded, airless truck and beaten again when they arrived:

"We were treated badly at Misrata. We were Eritreans, Ethiopians, Sudanese, and a few Somalis. The rooms were not clean. We were only given a half-hour a day to take air outside, and the only reason they let us out at all was to count us. We sat in the sun. Anyone who spoke would be hit. I was beaten with a black plastic hose."


Many of the worst abuses reported to Human Rights Watch occurred after failed attempts to leave Libya. One of the migrants, "Pastor Paul" (all names have been changed), a 32-year-old Nigerian, told Human Rights Watch how Libyan authorities brutally treated him when the Libyans stopped his boat shortly after it left Libya on October 20, 2008:

"We were in a wooden boat, and Libyans in a [motorized inflatable] Zodiac started shooting at us. They told us to return to shore. They kept shooting until they hit our engine. One person was shot and killed. I don't know the men who did the shooting, but they were civilians, not in uniforms. Then a Libyan navy boat came and got us and started beating us. They collected our money and cell phones. I think the Zodiac boat was working with the Libyan navy. The Libyan navy took us back in their big ship and sent us to Bin Gashir deportation camp. When we arrived there, they immediately started beating me and the others. They beat some of the boys until they could not walk."

These brutal methods had the intended effect according to the BBC:


European Commission figures show that in 2009 the number of people caught trying to enter Italy illegally fell to 7,300, from 32,052 in 2008. The data was collected under the EU's Eurodac fingerprinting system.

Col Gaddafi has forged close ties with Italy since a friendship treaty was signed two years ago.

"Prime Minister Silvio Berlusconi and Mu`ammar al-Gaddafi are building their friendship agreement at the expense of people from other countries whom both regard as expendable,"

was the response from Bill Frelick, refugee policy director at HRW.

This second excerpt is from Racism in Libya, 12 September 2011:


Qaddafi's use of racism

Writing in the Cedi Post last September, Kwame E. Bidi tells us of another way Qaddafi profited from racism:


Addressing the European Union (EU) in Rome, Gaddafi warned that “Europe runs the risk of turning “black” unless the EU pays Libya at least €5 billion (£4.1 billion) a year to block the arrival of illegal immigrants from Africa”. He continued, “Tomorrow Europe might no longer be European and even black as there are millions (of Africans) who want to come in. He described the migration pattern as something “very dangerous”.

If one analysis Gaddafi’s statements critically, it comes out clear that he is essentially saying, “Europe, you need to protect your prestigious white identity and prevent it from being blackened by the influx of black African people”.

He is actually playing the race card quite subtly, by appealing to the racial prejudice of the European people. Thus, he not only referred to the potential risks posed by illegal immigrants as undesirable consequences, but also that, black faces in Europe, whether legal or otherwise in itself, constitutes a danger to white European identity.

Gaddafi bolstered his dislike for black people and then projected his own racial bias on white European Christians when he further remarked, “We don’t know what will happen, what will be the reaction of the white and Christian Europeans faced with this influx of starving and ignorant Africans”.
...
After his speech, one Italian MP, Luigi de Magistris, criticized the Libyan leader of keeping tens of thousands of African migrants in “concentration camps” in the desert, reported Telegraph, UK.

Gaddafi’s blunt disrespect for black people in general, calls to question the intention behind his call for African unity. Many scholars believe Gaddafi has a hidden agenda against black Africans and that the African Union (AU) was simply a means for him to further his religious and political ambitions in sub-Saharan Africa. One such scholars, Prof. Kwesi Kwa Prah, alleged in 2004 that, Gaddafi’s true objective in AU is to create a space for Arabism and Arab expansionism.

My earlier dairy Helter Skelter: Qaddafi's African Adventure has a lot more about his history with the African Union, his interventions in Africa's wars and his African immigrant policy, however it was written before he was forced out.

Since the liberation of Tripoli, we have also been able to learn more about the plight of immigrants under Qaddafi's rule. For example, there is one group of homeless black African immigrants that have been living under tarps strung between boats in a small Tripoli fishing port. The war has been especially disruptive for them. Time reports:


Since the rebel takeover of Tripoli last week, a few philanthropists have ventured into the camp with gifts of food and water, they say. But for months, men with guns used to come to loot and beat people up, the camp's inhabitants say. "They came in here robbing our gas, stealing our property," says Margaret Asanti, a Nigerian who has been at the camp for almost two months with her two young children. She lived a relatively stable existence in Tripoli for 12 years. But she says, "If you take me to my country, I'd be very happy. I'm tired of being in this place."

Also since the fall of Tripoli, indisputable proof of Qaddafi's use of black African mercenaries in his bloody bid to extend his 42 year dictatorship has been pouring in:

I would add that there is also ample evidence that Qaddafi has employed mercenaries from other Arab and Europeans countries as well and not all black Africans fighting for Qaddafi were mercenaries or even foreigners. As with the Abu Slim district in Tripoli, Qaddafi had curried favors and built loyalties in certain strategic communities.
I hope these excerpts shows you is that one way in which "regime change" in Libya has added to the European migrant crisis is that Libya now refuses to be Europe's racist gatekeeper to Africa and that is a good thing no matter how much it inconveniences Europeans or feeds the "anti-imperialists."


Click here for a list of my other blogs on Libya
Posted by Linux Beach at 10:03 AM