As Assad loses ground, he gains a new air force

Tweet
Recently, the tide of war has been turning against the Assad regime as it has lost ground both to the terrorist army ISIS and to a revolutionary coalition of anti-Assad forces. While the loss of Palmyra has gotten a lot of attention, rebel wins, like this one reported Wednesday by Qasioun News, have also been gaining ground:

In the same context, Syrian regime forces shelled with mortars over Douma city in Rif Dimashq, led to injure 15 civilians, among them women and children. More...

While the Assad regime continues to be bank-rolled and supplied with weapons by Russia and Iran, the strength of the official Syrian Arab Army had long ago been sapped by defection and attrition. For the past several years the regime has had to rely on sectarian gangs like the Iranian trained National Defense Force and foreign armies like the Lebanese Hezbollah or Iraqi Shia militias to do its fighting on the ground. Now these forces are beginning to falter and Assad has no reserves to send in, so he is forced to fall back and give up ground.

The one advantage he still has, thanks to the forbearance of the world's great powers, is the ability to cause almost unlimited death and destruction from above. This is euphemistically known in military circles as "air supremacy." Since August of last year, air space over Syria has been shared by US and Syrian war planes - not attacking each other - but co-ordinating their activities so as to jointly maintain air supremacy over Syria.

President Obama said that he was sending US war planes into Syria only to fight ISIS and another unheard of group they said threatened US national security. Although the Obama administration claimed it wasn't there to help Assad, many observers saw that even by just targeting ISIS, Obama was freeing up Syrian air assets to continue barrel bombing schools, hospitals and breadlines.

Now, just as the Assad regime is losing ground to a big new rebel coalition that includes al Nusra, the FSA and other militias in Idlib and northern Hama provinces, the US has stepped up its air campaign against those attempting to overthrow the Assad regime. From recent reports it sounds like Assad has gained a new air force with Obama targeting opposition forces in Idlib and Aleppo as Assad is fighting to preserve positions there. From Reuters we have:


US led air raid kills 15 al Nusra fighters in Syria -monitor
20 May 2015
BEIRUT - An air raid by U.S.-led forces killed at least 15 members of al Qaeda's Syria wing Nusra Front in the northwest of the country on Wednesday, a group monitoring the Syrian civil war said.

The raid hit the headquarters of the group in Tawama village in the western countryside of Aleppo province, said the Britain-based Syrian Observatory for Human Rights, which gathers information from a network of sources on the ground.

Most of the fighters killed were Turkish, it said, and there were several also wounded. It was not immediately clear how senior they were.

U.S.-led forces have been striking jihadists in Syria and neighbouring Iraq since mid-2014 and have mainly targeted the militant Islamic State group, but have also killed a smaller number of Nusra Front members in Syria. More...

Also destroyed the centers completely, while Civil defense men try to search for survivors and take-out the dead bodies under ruins, among heavy spreading for Al-Nusra front’s fighters.

Some of these recent operations might as well as been joint US-Assad strikes: 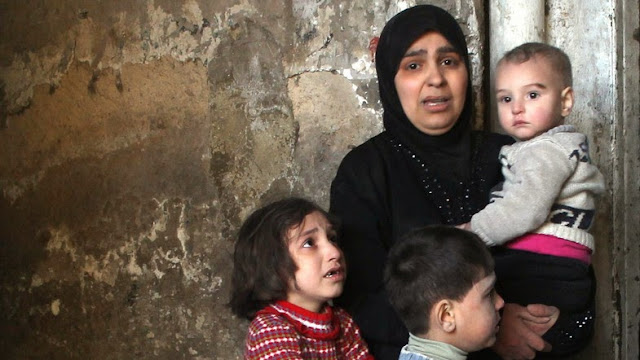 Besides two civilian were killed and many were injured including medics due to missiles by regime forces over Abu Jabar village in eastern countryside.

While one civilian was injured in Bustan Alkuser neighborhood due to firing by Regime’s Sniper where he located in Al-Baldi palace, besides regime forces shelled with tank AlShaar neighborhood.

Michael Karadjis has provided English translations for these important communications:

Confirmed by rebels and also Nusra:


US-led coalition bombed Nusra positions in Idlib where 7 Nusra members according to the article above were martyred, in addition to a simultaneous bombing happening in Western Aleppo where 15 Nusra members were also killed at the municipality building in the Tawama village.

Click here for a list of my other blogs on Syria
Posted by Linux Beach at 9:29 AM