Tweet
While the Syrian Revolution was still young, the Palestinian organization Hamas, unlike its sister organization, Hezbullah, broke with the Assad Regime and sided with the revolution. This has cost them dearly. They were forced to move their headquarters out of Damascus and they lost most of their subsidy from Iran.

This would seem to pose something of an existential dilemma for those on the Left that have long supported Hamas' struggle against Israel, in spite of its Islamist character, but oppose Islamist fighters, presumably even those from Gaza, when they are arrayed against Assad.

It will be interesting to see how they square that circle.

They come from the Gaza Strip, where Islamist groups are committed to armed struggle with Israel.

But the fighters in this footage are different. They joined rebel forces in Syria's civil war.

Earlier this year, Fahd al-Habash from Gaza's Jabalia refugee camp recorded a message asking his family not to mourn him if he died.

"If you hear that I have been killed and left this world, rejoice for me because I got what I wished for," he said.

It is said that soon afterwards the 28-year-old father-of-two was shot dead near Homs.
...
Since the war in Syria started in early 2011, it is estimated that about 30 Palestinian militants from Gaza have headed there.

A veteran militant, Mohammed Qanita, was killed about a year ago after joining the Islamic State of Iraq and the Levant (ISIS), a jihadist group that is linked to al-Qaeda. He had been training new recruits.

The fighter had previously belonged to the armed wing of Hamas, the Izz el-Din al-Qassam Brigades.

In keeping with the popular mood, Hamas celebrated him as a "martyr" after news emerged of his death.
...
However the movement between Gaza and Syria is not just in one direction.

Dozens of Syrian refugees have headed here since the war started, as well as hundreds of Palestinian refugees who were living in Syria. More... 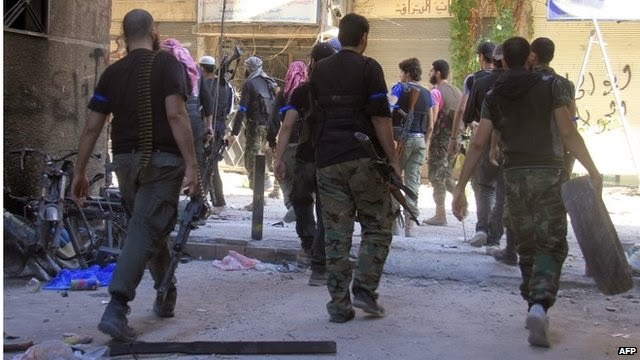 Click here for a list of my other blogs on Syria
Posted by Linux Beach at 4:23 PM