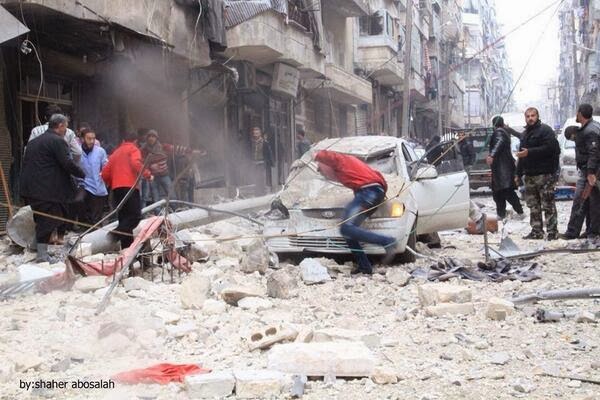 Are you a holocaust denier? This is not civil war, this is simply murder. Or would you consider, Warsaw, when the Jews fought back against the Nazis in the ghetto "civil war?" Saying stupid things like "both sides committed war crimes" while washing your hands of it?

Forced from their homes, even their country, by the "world community's" failure to restrain Assad's murderous assault on his people from the air, many more are now freezing to death in the snow. 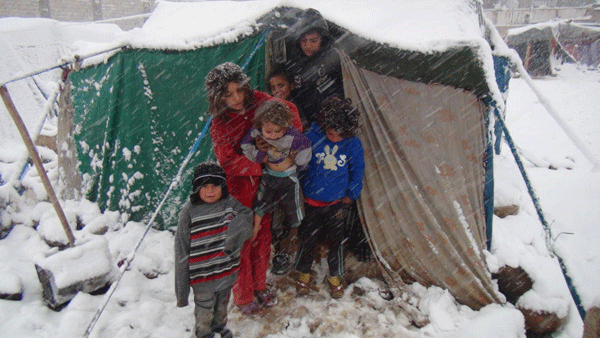 AP has this report:


Syrian airstrikes pummel rebel areas
BEIRUT (AP) - Syrian government aircraft pounded opposition areas in the northern city of Aleppo and near the southern border with Jordan on Monday, a day after airstrikes killed at least 76 people, while the United Nations issued a record appeal for $6.5 billion to help the millions of Syrians uprooted by their homeland's civil war.

President Bashar Assad's air force is his greatest advantage in the country's civil war, and he has successfully exploited it to stem and even roll back rebel advances across the country. Human rights groups say Syrian military aircraft have carried out indiscriminate air raids that frequently hit civilian targets, such as hospitals, bakeries and residential areas.
...
On Monday, a day after government helicopters dropped barrels packed with explosives on several Aleppo neighborhoods, the Britain-based Syrian observatory for Human Rights on Monday said the death toll from those strikes had risen to at least 76, including 28 children.

The government frequently uses barrel bombs, which contain hundreds of kilograms (pounds) of explosives and cause massive damage on impact. Amateur videos posted online showed the aftermath of Sunday's airstrikes: buildings leveled by the explosions, rubble-strewn streets and smoldering wreckage of vehicles.

Another activist group, the Local Coordination Committees, said at least 12 neighborhoods were hit and put the death toll at 83. It said that number is likely to rise because of the large number of wounded and the lack of sufficient medical supplies.

The main Western-backed opposition group, the Syrian National Coalition, condemned the strikes, and accused the government of "waging a barbaric campaign on the city of Aleppo through which it seeks revenge and the spread of chaos."

In a statement, the Coalition also said it has documented the names of 103 people who were killed and more than 350 who were wounded in Aleppo, in addition to 21 who died in the town of Dumeir in Damascus suburbs in air raids. More...


This is how the very badly mis-named AntiWar.com reported the story:

As Syria’s civil war has dragged on, Syria’s military is relying more and more on barrel bombs to hit entrenched rebel targets. The makeshift munitions are just oil barrels full of explosives rolled out of the back of a helicopter.

The bombs are powerful, but extremely inaccurate, and tend to careen off target quite often, which in densely populated territory is a recipe for high civilian casualties.

This is the second major round of barrel bomb strikes in metro Aleppo this month, with a previous round targeted at a rebel headquarters likewise missing, hitting a nearby market and killing around 50 people

I reported on that earlier attack here, Assad kills 50 civilans in Al-Bab with Barrel Bombs, and while AntiWar.com may have thought they killed those 50 people, only 3 of which were fighters, by accident, that's not what the official SANA new agency said. They reported "Syrian army units destroyed the headquarters of an Islamic (rebel) tribunal in Al-Bab in a special operation," without giving further details.

Now, I don't claim to be a rocket scientist, or any kind of weapons expert, but AntiWar.com's excuse for Assad's barbarity defies belief. We aren't talking about dumb bombs dropped from the stratosphere by B-52's. These are barrels filled with explosives and dropped from helicopters. Helicopters don't fly that high and the pilots can see exactly what they are bombing. I have to believe that it would take one hell of a strong wind to blow them off course.

It is clear to any honest observer of this war that the Assad regime has been deliberately targeting civilians, but here we have the so-called AntiWar.com, ready to excuse Assad's carnage, of course the article never mentions Assad, as an unfortunate accident. Does AntiWar.com have no shame? Is this the state of the so-called "antiwar" movement that such voices are still considered members-in-good-standing? 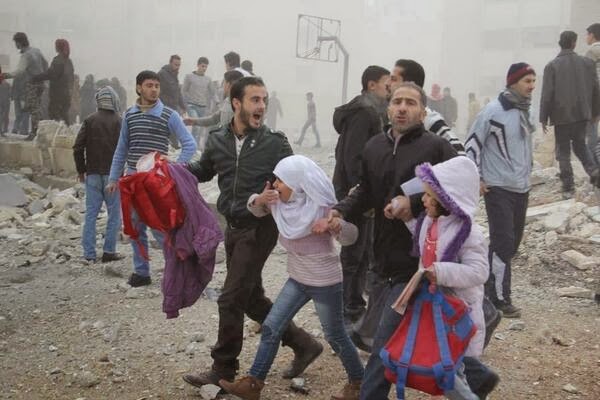 Click here for a list of my other blogs on Syria
Posted by Linux Beach at 2:33 PM