Tweet
Counterpunch has time and again shown that it has no integrity when it comes to reporting on people's revolts against its "anti-imperialist" heroes like the fascist dictatorships like Mummar Qaddafi and Bashar Assad. It depends on a readership that doesn't really know what is going on in Syria so they can keep them in the dark and feed them bullshit.

But facts are stubborn things.

From Counterpunch Wednesday we have this:


The Unwitting Agents of the Imperial Order

The Wishful Thinking Left
by JEAN BRICMONT
Louvain, Belgium.
August 14, 2013
...
I am no expert on Syria, but if the people are so united against the regime, how come that it has resisted for so long? There have been relatively few defections in the army or in the diplomatic and political personnel.

You may have noticed that the Assad Regime has had the power of the Syrian state and with it the Syrian armed forces and in spite of a very large number of defections from the SAA, it has been able to effectively use long range weapons including Scuds, jet bombers, helicopter gunships and long range artillery to kill ten of thousands of Syrians who object to his rule whether they have taken up arms against him or not. He has also been able to use this power, a power which requires relatively few Syrians to exercise, to make liberate areas unlivable.

He has also enjoy the unqualified support of Russia and Iran, which have been willing to provide him with the weapons and support that he has needed to kill tens of thousands of Syrians and attempt hold off the revolution. He has also been able to bring in foreign fighters from Hezbullah, Iran and Iraq who have no qualms about killings civilians.

He has also had the indirect support of the NATO powers. While they profess support for the people's struggles, the US, UK and France have yet to provide a single bullet to the opposition and Obama has had the CIA busy trying to keep them from getting any heavy weapons from any source.

While the people are united in their opposition to the regime, they are far from being united in one party or one army with a single command structure and this clearly has slowed military progress. This is a result of how this revolution developed as a true grass-roots movement with a very broad base of support. Some people complain about the "disunity" of the Syrian opposition as if it had once been united and then fell apart. This is clearly not the case. Independent fighting groups developed among the people in their localities, or when large units of the SAA defected with their command structures intact, the building of unity and co-ordination among these groups is not automatic and remains one of the great tasks of the revolution.

With all that going against them (and this is likely to be the case in all revolutions, especially in a period when so much of the "left" has turned its back on revolution.) not only have they managed not to be crushed after two and a half years but they have been making steady progress and now control the majority of Syria and are on the verge of completely liberating Syria's second largest city, Aleppo.

I know all the pundits are saying its a stalemate. They always say that until the revolution has won. According to them, the Vietnamese Revolution was a stalemate pretty much up until Saigon fell. The Libyan Revolution was considered an endless stalemate (6 months!) rightup to the point Tripoli fell. They will likely declare that the Syrian Revolution is a stalemate, if they aren't saying Assad is winning, right up to the day Damascus falls.

But I find it an impossible Herculean task to take on all the lies and distortions in any given Counterpunch article on Syria so it this piece I just want to take on:


There have been relatively few defections in the army or in the diplomatic and political personnel.

And defeat it in detail with my stubborn friends.

Shall we start with high level defections? I personally don't consider them the most important because they aren't doing the fighting, but many people do. Anyway, there are less of them, since in general there are less high level people, so maybe I can be more comprehensive. I don't expect I can do more here than give you samples of the tens of thousands of ordinary defections that propel the revolution forward.

From the NY Times a year ago, we have this report of a high level defection from the Assad regime:


Prime Minister’s Defection in the Dark Jolts Syrians
By DAMIEN CAVE and DALAL MAWAD
Published: August 6, 2012
BEIRUT, Lebanon — The defection of Syria’s prime minister, Riyad Farid Hijab, began like so many others: with coded conversations and furtive planning. He began discussing the idea of fleeing, an aide said, as soon as President Bashar al-Assad strong-armed him into taking the job in June. In recent days, he worked to get his extended family out. Then, early Monday, the prime minister slipped out of Damascus under cover of darkness with his wife and four children, scrambling through the desert as a fugitive. More...

On 27 Dec 2012, I brought the news that Brigadier General Mohammad Ali Hassoun, director of Aleppo Military Academy had defected to English speakers with:

BREAKING: Another high level defection in #Syria
But the list of high level defects is quite long. Fortunately Wikipedia has done much of this work for me, which is all the more reason why Jean Bricmont can't justify making this statement, but Wikipedia even admits that their list is incomplete:
Al Jazeera has developed its own interactive system for tracking Syria's defections and it won the 2013 Online Media Awards for best technical innovation. You can see it here.

This is the net result of their study, note what the trend is: 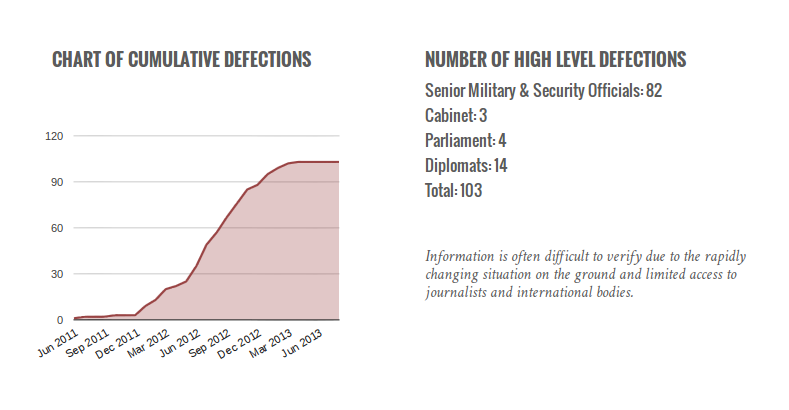 One of the defining features of the Syrian Revolution has been the defection video. When soldiers or whole units defect from the Syrian Arab Army they typically post a video on-line announcing the defection. Often they will show their military IDs so that we will know that this is no joke. In fact, the Free Syrian Army was founded when 200 SAA soldiers refused orders to fire on peaceful protesters in Daraa, 29 July 2011, and instead defected and posted a video announcing their intention to form a unit to protect protesters and inviting other SAA soldiers to join them.

That started a flood, these aren't high level defections, these are the best of the Syrian working class:

Defecting Syrian Officer: I Was Ordered to Use Chemical Weapons | 29 April 2013

I could go on and on because there are literally thousands of these videos, in fact a YouTube search for "Syria defections" returns over 30,000 results, although many of these videos are of individual soldiers or small groups.

The point is that Counterpunch is telling a complete lie when it says:


There have been relatively few defections in the army or in the diplomatic and political personnel.

These opportunists are forced to tell this lie and also to tell you that most of the people fighting the Assad regime are foreign jhadists because the truth that it is working class soldiers that have revolted and who they are opposing is too shameful to admit.

Probably the only truth in Jean Bricmont's Counterpunch article was his admission that he is no expert on Syria but it is worst than that, in denying these defections, Counterpunch is denying the essential character of the Syrian Revolution and revealing itself as an enemy of the Syrian people.

Is it any wonder that Counterpunch doesn't allow comments to this trash?