04-08-2013: The Syrian Human Rights League (SHRL) has reported that around 5,000 inmates from the regime’s infamous Adra Prison in the northeast outskirts of Damascus have been buried in one mass grave in the area around a regime military base in Al Qutaifah in the Qalamoun region of Damascus province following summary execution by regime ‘security’ forces . This is one of a number of such mass graves, the group states.

“Based on witness statements and testimonies from detainees,” the league reported that on a regular basis “hundreds of detainees are executed while in regime custody, with their bodies disposed of by burial in mass graves scattered across the area.” 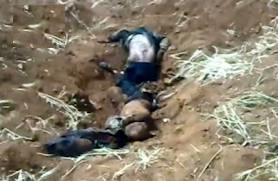 SHRL President, Abdel Karim Rihawi, quoted witnesses and activists’ statements saying that hundreds of detainees imprisoned at state security detention centres had been executed and buried in mass graves, with their families informed of their deaths after the burial and refused any information about the whereabouts of their loved ones’ remains.

“In the vicinity of the Third Division headquarters in Al Qutaifah in the Qalamoun area where they continue the process of bombarding the northern regions [this is a main regime base used for firing ballistic missiles], there is a large concentration camp where detainees are brought from rural areas of Damscus and summarily executed,” the report stated. “Several mass graves are located in the vicinity of the headquarters where mass burials take place on a daily basis using a bulldozer [to excavate the graves and to cover the executed martyrs' bodies after they are thrown in].”

He added, “It is estimated that the number of corpses in one of the mass graves is around 5,000,” adding that it is currently impossible to verify the exact figures since regime military zones are wholly inaccessible to any non-regime personnel.

In the report issued yesterday (Saturday August 3rd), the SHRL also reported that the regime’s political security division in Damascus had secretly transferred dozens of political detainees from Damascus’ notorious Central Prison to an unknown destination, adding that many of the transferred detainees had been hastily convicted of manufactured crimes in kangaroo courts convened solely for the purpose of convicting them, and been sentenced to life imprisonment, often based on ‘confessions’ extracted under torture.

The SHRL expressed grave concern over the fate of the disappeared detainees, urging the regime authorities to provide “immediate disclosure of [the missing detainees'] whereabouts and to enable them to communicate with their families and comply with international law in providing access to legal assistance and the necessary humanitarian help.”

It should be noted that this is not the first such report of the Assad regime using mass graves to dispose of victims, with leaked video footage showing dumper trucks unloading bodies emerging earlier this year.

This is another one of those stories that won't make the network news. It won't even make Democracy Now*, hell, Amy didn't even mention Syria today. Why would any of them bother to report this? Anyway you call it its only 5,000 souls. I need to get worried about September's rent already, I just made August with a little help from my friends, but somebody needs to report this stuff, so I scribble on so that the 5,000 bodies in a mass grave have a voice.

So now the known death toll for the Syrian conflict no longer stands at 100,000. Just like that it jumped to 105,000 and who knows how many Syrians Assad has killed that we still don't know about.


@al_7aleem @GRAFIXEL I'm afraid thousands and thousands of mass graves will emerge, like the one being reported from Adra prison today

Click here for a list of my other blogs on Syria
Posted by Linux Beach at 1:08 PM