Tweet
On Wednesday, as is usually the case, ABC News World News with Diane Sawyer, made no mention of Syria or the humanitarian crisis that is quickly evolving there, where already 600,000 Syrians have been forced to seek refugee from Assad's bombs & shells outside their country.

But after having seen a continuing stream of reports of children freezing to death in the refugee camps over the past week, I was particularly outraged by the insensitivity of the following report. I have changed the images she used to something I find much more suitable, but the words are her own: put cursor on pix for caption 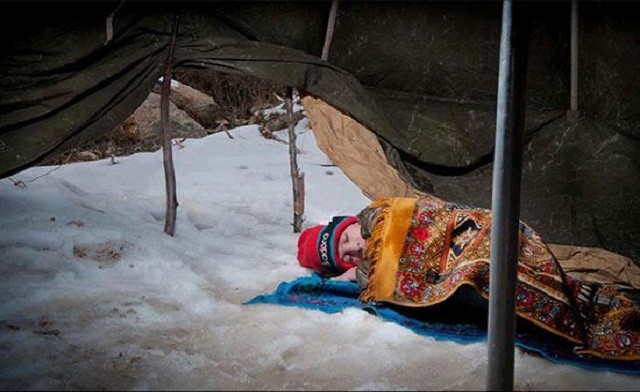 And tonight more dramatic images of a planet in chaos from the weather. In the Arabian desert, a rare snow storm. That's snow in Jordan. Children there amazed and delighted by the strange white stuff all around them, and across the ocean here at home... -- Diane Sawyer | 9 Jan 2013

Is ABC News really that disconnected from what is going on in and around Syria or are they just trying to keep the rest of us in the dark?

The other point that this illustrates is that those Assad supporters and anti-interventions who see an effort in the main stream media to build support for NATO intervention in Syria are very wrong.

5:54 PM PT: CNN tells us what Assad's war against his people is doing to the children:


Scavenging for food, Syrian children witness war
By Nick Paton Walsh
January 7, 2013 -- Updated 1318 GMT
Bab al-Salam, Syria (CNN) -- It is a sight almost as surreal as it is disturbing: three boys, on the cusp of being teenagers, digging furiously with their hands and sticks. It is in some ways playtime, but there is little innocence left in this refugee camp sandwiched between Syria's north and an unwelcoming Turkish border.

Muhammad Zafir says their frantic excavations are in case "jets come and drop bombs," he said. "We put children here to hide them, but of course we will make it much bigger for 20 to 30."

It is a testament to their fast and unnatural path into manhood: Hours that should be spent idling or playing football are lost to digging an air raid shelter. Muhammad can explain the different noises made by jet missiles, rocket-propelled grenades and heavy machine guns. The three boys are also digging peepholes into their structure, so they could see outside during any attack. It's rudimentary and made entirely of mud and finger marks, but it is all they have.

This is life for the 8,000 Syrians who fled everything, hoping for something but ending up with little.

Despite being some 100 yards from a NATO power -- the doorstep of Europe -- and a developed economy, they scavenge for wood and burn plastic to keep warm. They chop down weeds to supplement their faltering diet. Some 22 months into the war -- and despite the world's sympathy -- they face a winter of freezing temperatures and uncertain food.

Refugees in the Bab al-Salam camp just inside Syria can see the Turkish refugee camps from the roofs of their buildings, but Turkey for now will not accept them. So they are caught between the war they fled and the outside world that will not embrace them. They number some 200 families and growing, huddled around plastic tents that work as temporary shelter during summer but will do little to protect them from the frost of winter. More...

UNICEF is asking for your support:

Winter storms bring further crisis to Syrian refugees
10 January 2013
Some 55,000 Syrian refugees have been left without shelter due to severe weather conditions in northern Jordan.

Rain, snow and sub-zero temperatures have magnified the plight of those affected by the ongoing conflict, who are living in temporary accommodation at the refugee camp in Za'atari.

Widespread flooding and swamping tents have overwhelmed the camp's drainage system, and deep mud has made access for trucks delivering clean water difficult.

Many of the Child Friendly Spaces where children can play and seek psychological support have been flooded, as has a tent used to house unaccompanied children.

UNICEF is working around the clock to drain areas worst affected by the floods, sustain services to the camp, and ensure that all refugees have access to safe water, toilets and showers.

Warm clothing along with sleeping mats have been given out to replace mattresses soaked by rainwater, and heaters have been provided to families now living in prefabricated buildings within the camp.

Dominique Hyde of UNICEF Jordan said: "The next 72 hours will be a critical test of our ability to meet the basic needs of those at Za'atari. We are doing everything possible to make sure that children here stay warm and dry."

Lack of funding is a serious concern for those working on the ground as 2012 resources have been exhausted.

The deteriorating situation at Za'atari comes amid an influx of refugees fleeing the conflict in Syria. Since the beginning of the year, 10,000 Syrians have arrived in Jordan.

Not all news anchors are as detached as Diane Sawyer.