"If they want to be Syria, we'll give them Libya."

In other news: 539 women candidates are running in Libya's July 7th national elections.

According to Reuters this morning, Libya is considering demanding a refund of $1.75 billion in Qaddafi era loses from Goldman Sachs and Societe Generale.

Germany's Wintershall announced on Monday that its oil output had reached 70% of its prewar levels, and expects to be at 100% once a new export pipeline it is helping to build with the state-owned NOC and Agoco is completed.

My Qaddafi lies live on after him [first published here June 8th] is republished on the front page of the Libya Tweet Forum, one of the leading English language websites to come out of the revolution. 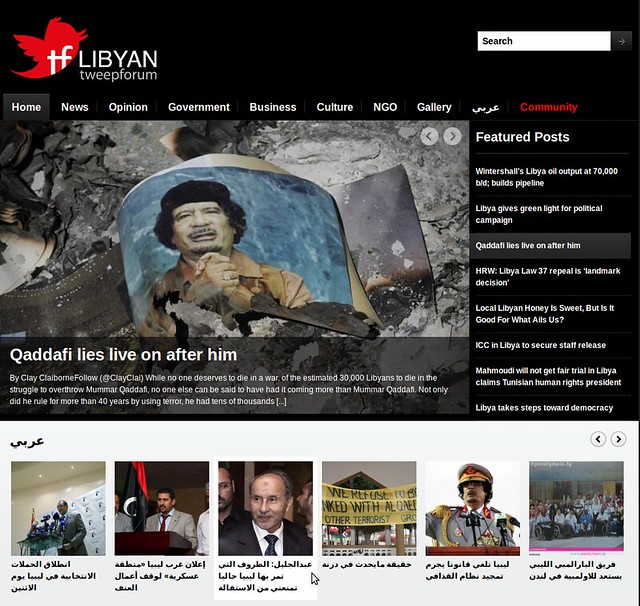 Anita Binh who publishes the North Star sent me this from another website he thought I might like to write for. As he described it "They don't seem to have any "big names" but judging by the names of the writers its a site frequented by revolutionary-minded Arabs/Muslims who are not connected with the traditional left."

I liked this piece so much I am reprinting part of it here. I especially like when he says:

Those criticising the war against Gaddafi have viewed the whole conflict through the prism of Nato intervention, forgetting the huge legitimate grievances of the Libyan people. It is insulting to the memory of the tens of thousands killed by the Gaddafi regime to talk about the whole affair as some sort of plot to prevent Gaddafi from using gold currency instead of dollars – the fact that this argument supposes that Gaddafi is some sort of economic revolutionary shows how preposterous it is.

Below the fold you'll find more of his thoughts.

The image of a bloody, topless Colonel Muammar Gaddafi pleading for his life whilst being dragged and humiliated by Libyan revolutionary fighters will perhaps become more memorable than the images of his dead body. The once mighty dictator reduced to a pitiful wreck is already one of the defining images of the ‘Arab Spring’.
...
From our far-flung corners of the world it is easy for us to sit and moralise. We can moralise over the rights and wrongs of showing images of a dying, and then dead, Gaddafi on our television screens and in our newspapers. I am not surprised that people in the West should be against this, but in all honesty regularly watching Arab television means that the images do not offend me. An argument can be had for the hypocrisy of Western media outlets in showing the pictures of the dead Gaddafi and yet never doing the same for a Western figure. It can also be argued that showing these images makes a spectacle out of the dead, and desensitises us. I would disagree; in fact I would argue the opposite. Whilst I may be used to seeing images of dead people that are perhaps more available in Arab media outlets, it does not mean that I am not shocked every time I see those images. If anything it makes me think more about the crimes that are committed daily around the globe. The problem that people have in the West is that they are sheltered. Sheltered from the real horridness of daily life, and death, in our world. When you do not see the result of a drone attack, the blood, the guts, the gore, it is a lot easier to back it as a useful tool in the anti-terror crusade.

That does not mean that all armed conflict is wrong. In the case of Libya armed intervention was necessary to protect the Libyan people from certain massacre. Of course, NATO powers primary reason for intervention was not humanitarian. But, occasionally, interests converge. Here’s something – maybe the Libyan people do not have this ingrained sense of weakness when it comes to the West? Do you genuinely think, after they gave their lives to fight Gaddafi, that they will lie down and see their land raped of its resources? Unfortunately, the tribalism of certain elements of the global anti-imperialist movement blinds them to this. For many of those asking why Gaddafi had been summarily executed were those who were against Nato intervention in Libya, and in turn against the Libyan revolutionaries, painting them as murderous puppets of the West, rather than the freedom fighters that they are.

For that is the major problem with some of those who now speak out about the perceived wrongs of the killing of Gaddafi, attempting to equate those who will come after him with the tyrant himself. They have completely failed to understand Libya and the painful history of the last 40-odd years. A quick look at Gaddafi’s past would stop those who think he genuinely was a pan-Africanist. Gaddafi was an opportunist who merely switched from pan-Arabism to pan-Africanism when he saw that his fellow Arab dictators had realised he was a clown and were not taking him seriously. Unfortunately, the Africans crowned Gaddafi King of Kings, further expanding his ego.

It is interesting that there are no prominent Libyan activists speaking out on behalf of Gaddafi, or even against Nato intervention. Surely, if this was all a huge imperialist conspiracy one Libyan would have been found in the West to speak out? Well, unlike the many activists who now imagine they are speaking for ordinary Libyans, or the global South, Libyans actually know their country and their history, and they know that Gaddafi had to go, whatever the cost.

For the anti-imperialists are just as much at fault as any right-wing nationalist in perceiving everything in the non-Western world through a Western lens. Those criticising the war against Gaddafi have viewed the whole conflict through the prism of Nato intervention, forgetting the huge legitimate grievances of the Libyan people. It is insulting to the memory of the tens of thousands killed by the Gaddafi regime to talk about the whole affair as some sort of plot to prevent Gaddafi from using gold currency instead of dollars – the fact that this argument supposes that Gaddafi is some sort of economic revolutionary shows how preposterous it is. As bizarre as this might seem to people who only view the world with Western eyes, the people of the ‘East’ actually would like to be free from their homegrown dictators. Hey, some of them may even prefer capitalism to the bizarre ramblings of a madman obsessed with the colour green. The internal oppressor for the people of Libya was far worse than any external oppressor in the form of Nato.

The Libyan people know the oppression that they have faced; they have lived it. They do not need those who only took an interest this year to tell them what they should and should not do with their dictator, and with their future. Instead, they deserve our support, our understanding. Look at the hundreds of thousands who have come out onto the streets of Libya to celebrate their liberation. Understand that for them Gaddafi was the greatest evil, and he had to go, whatever the cost. And before passing judgment on their country, talk to a few of them, and try and understand that the Libyans are ecstatic that Gaddafi is gone.